INSIGHT FOR ANONS – It’s All Going According To The Plan 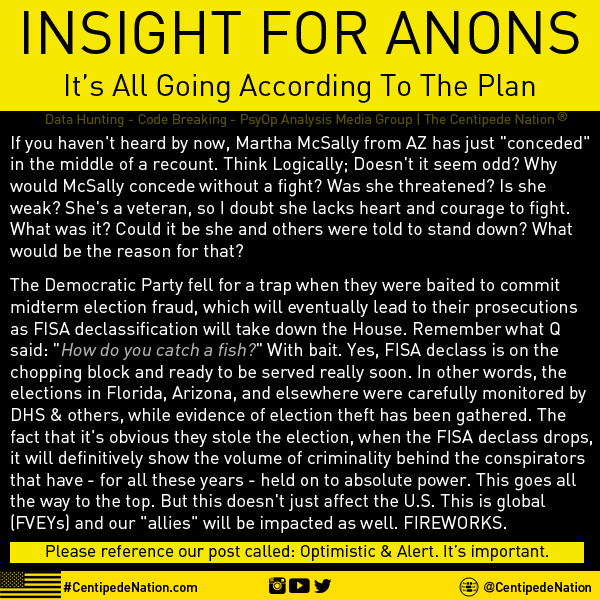 Do you really think Trump, General Dunford, and the other anon white-hats are going to let this country be run like a banana republic for the world to see without any repercussions? Impossible. This timeline is being bloated so that it can be referenced for future generations. It will show our descendants why we applied voter id, and other laws. There are no coincidences. Trust the plan and not the fearmongers.

If you haven’t heard by now, Martha McSally from AZ has just “conceded” in the middle of a recount. Think Logically; Doesn’t it seem odd? Why would McSally concede without a fight? Was she threatened? Is she weak? She’s a veteran, so I doubt she lacks heart and courage to fight. What was it? Could it be she and others were told to stand down? What would be the reason for that?

The Democratic Party fell for a trap when they were baited to commit midterm election fraud, which will eventually lead to their prosecutions as FISA declassification will take down the House. Remember what Q said: “How do you catch a fish?” With bait. Yes, FISA declass and the OIG report is on the chopping block and ready to be served really soon. In other words, the elections in Florida, Arizona, and elsewhere were carefully monitored by DHS & others, while evidence of election theft has been gathered. The fact that it’s obvious they stole the election, when the FISA declass and the OIG report drops, it will definitively show the volume of criminality behind the conspirators that have – for all these years – held on to absolute power. This goes all the way to the top. But this doesn’t just affect the U.S. This is global (FVEYs) and our “allies” will be impacted as well. FIREWORKS.