OPTIMISTIC AND ALERT – Election Fraud Being Taken Care Of 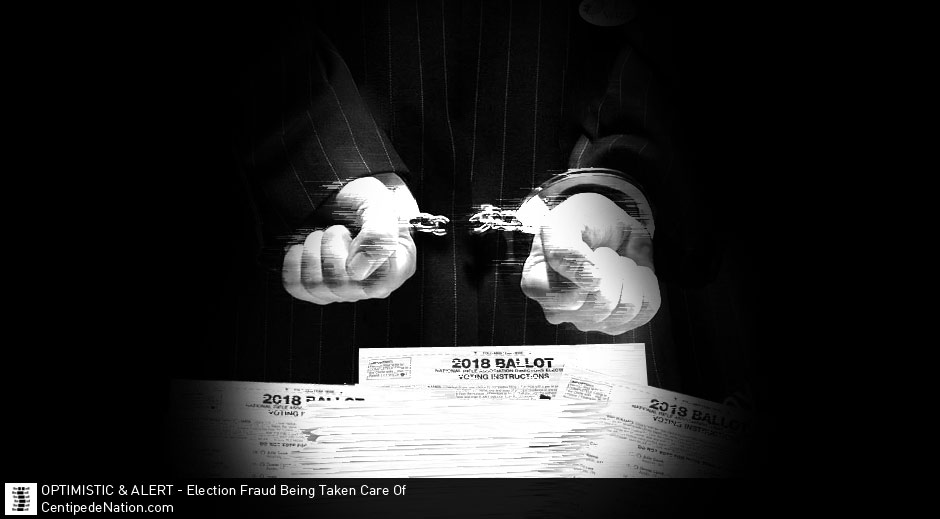 There are many reports of election fraud occurring as we speak. In fact, you’ll be hard-pressed not to find dozens of these instances all over the internet. Many are having panic attacks, while others are pointing fingers at Trump for not taking action, but you really shouldn’t be worried. We’ll show you why you should be optimistic. We’re in good hands. Enjoy the show.

A little Reminder of why you should be optimistic

Let us break it down as simple as we can: Election fraud is being taken care of by the Department of Homeland Security. In January of 2018, Trump dissolved all election fraud investigations handled by his Presidential Advisory Commission, and had the DHS take over the investigations behind closed doors, exempt from open meetings and public-records laws. The original data wasn’t even needed by the DHS to continue.

The Secretary of State of Kansas – Kris Kobach – said during an interview with NPR “DHS knows the identity of everyone who has green cards and temporary visas. You can take those names and dates of births and run those against a state’s voter rolls and see which of those people are actually registered to vote in a state. And then once you know that, you can look deeper and see if any of those individuals actually voted. That’s never been done before and that’s immensely valuable.“.

REMEMBER: The Department of Homeland Security includes the Federal Bureau of Immigration and Customs Enforcement, or ICE.

DID YOU KNOW?
The [Presidential Advisory Commission on Election Integrity] was created by Trump that ran from May 11, 2017 to January 3, 2018. The commission was originally created to review claims of voter fraud, improper registration, and voter suppression. After many states refused to provide the [Presidential Advisory Commission on Election Integrity] with basic information relevant to its inquiry, Trump dissolved it and passed the responsibility to the DHS.
Source: Wikipedia

Executive Order on the Termination of Presidential Advisory Commission on Election Integrity
Issued on: January 3, 2018

By the authority vested in me as President by the Constitution and the laws of the United States of America, it is hereby ordered as follows:

Sec. 2. General Provisions. (a) Nothing in this order shall be construed to impair or otherwise affect:

(i) the authority granted by law to an executive department, agency, or the head thereof; or

(ii) the functions of the Director of the Office of Management and Budget relating to budgetary, administrative, or legislative proposals.

(b) This order shall be implemented consistent with applicable law and subject to the availability of appropriations.

(c) This order is not intended to, and does not, create any right or benefit, substantive or procedural, enforceable at law or in equity by any party (other than by the United States) against the United States, its departments, agencies, or entities, its officers, employees, or agents, or any other person.

Since we know the DHS includes the Federal Bureau of Immigration, and ICE, this executive order does more than just target illegal immigrant votes, it targets fraudulent dead people voting, out of state voters, people voting multiple times, and much more.

Think about this; This week, Homeland Security Secretary Kirstjen Nielsen made a bold statement that these midterm elections were the “most secure” the U.S. has ever seen. Well, now that Florida, Arizona, and a few other States are still “Finding” new ballots – which suddenly caused a few Red votes to turn Blue – doesn’t Kirstjen Nielsen have a responsibility to back up her claim? So far, Trump and Rick Scott have called for investigations, while Arizona’s GOP have filed a lawsuit to challenge how mail-in-ballots have been counted in the Senate race. In fact, if you look at the latest results from Arizona, all of a sudden, the Senate has flipped to Democrat.

Law Enforcement is looking into another big corruption scandal having to do with Election Fraud in #Broward and Palm Beach. Florida voted for Rick Scott!

Reminder that DHS already given power by Hussein

Before leaving office, Hussein designated the nation’s elections systems as “critical infrastructure,” thereby giving DHS greater control over all voting systems. But is that really a good thing? Doesn’t that technically “nationalize” our voting protections and bypasses States’ rights? Is that even Constitutional? (Tenth Ammendment) Does it also help that the DHS were supposedly caught in Georgia (and other states) trying to infiltrate their election systems during the 2016 elections – before given these powers?

From the Wall Street Journal:

In a letter to Department of Homeland Security Secretary Jeh Johnson dated Thursday, Georgia’s Secretary of State Brian Kemp said the state had discovered an unsuccessful attempt to breach the firewall of state computer systems. The attempt occurred on Nov. 15 and was linked to an IP address associated with DHS, he said.

“We are looking into the matter. DHS takes the trust of our public and private sector partners seriously, and we will respond to Secretary Kemp directly,” a spokeswoman for DHS said.

Why You Should Be Optimistic

Did you know? Since 1982, the Republican Party had been legally prohibited from contesting elections due to suspected voter fraud because the GOP entered into a consent decree with their Democratic party counterparts?

The Consent Decree was finally ended by a Judge when the DNC could not prove that the RNC violated the decree before the expiration date in December 2017.

This means all bets are off. Expect Trump to go hard.

We know that there’s obvious voter fraud occurring as we speak, and we know that Trump has already called for action with the right people on his side to help expose it. Regardless of how our institutions were weaponized and used by the previous administrations to conduct shady acts, know that Trump has worked hard to put good people in tough positions that are going to help execute these tasks successfully.