RED – The Cross, The Crescent, The Crystal 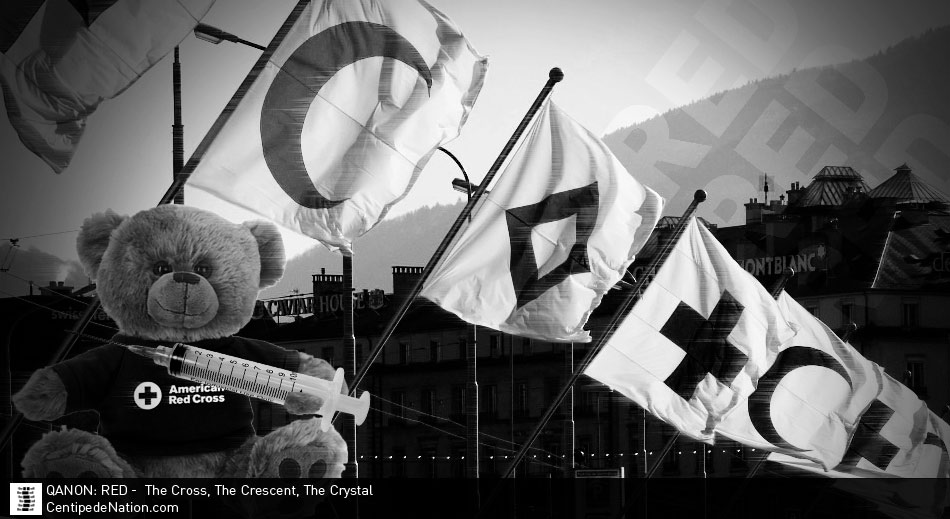 Human trafficking is big business, and while some hide under the umbrella of charities, most fly under the radar. Blood donations are only a small part of these monopolies that help inflate their size. What if we told you these Red organizations aren’t exactly what they seem? Let’s explore…

Who / What Is The Red Cross, Red Crescent, and Red Crystal Societies

The International Federation of the Red Cross and Red Crescent Societies operate in 190 countries in Africa, Americas, Asia, Pacific, Europe, Middle East and North Africa. Since 2005, an additional symbol was created called the Red Crystal.

The Red Cross is a multi layered organization that enjoys special status like a non-governmental sovereign entity. You read that right. They operate like a mini state. They have their own rules & issue their own passports. Their members are free to travel anywhere without question. Think diplomatic immunity. Of course officially they say they don’t operate as a non-governmental sovereign entity, but when you look into it deeper, you’ll come across the following that contradicts that status:

The ICRC has special privileges and legal immunities in many countries,[which?] based on national law in these countries, based on agreements between the ICRC and the respective governments, or, in some cases, based on international jurisprudence (such as the right of ICRC delegates not to bear witness in front of international tribunals).

On paper they might not be registered as a non-governmental sovereign entity, but with all the agreements they’ve made with countries around the world, their privileges gives them the same – if not more – access to international sovereignty than if they had been.

This document released in 2007 by the Red Cross in Geneva shows the given passport to a Nazi war criminal used to enter Argentina in 1950.

How Powerful Are the Red Cross?

An international agreement protects the full sanctity of all ICRC property in Switzerland including its headquarters & archives, grants members & staff legal immunity, exempts the ICRC from taxes & fees, guarantees the protected & duty-free transfers of goods, services, & money, provides the ICRC with secure communication privileges at the same level as foreign embassies, and simplifies committee travel in & out of Switzerland. 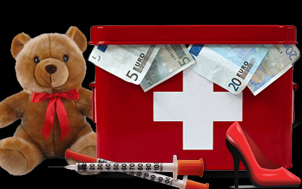 It seems to be nicely set up for any kind of international trafficking. Don’t you think?

The Red Cross are big on blood donations and blood transfusions. They set up their first blood donation service in the UK, which has now separated off as its own organization. In Israel, one of the main activities of the Red Crystal society is to collect blood and run blood banks. Blood is their business. And blood business is now normalised and acceptable across the world. Some blood is more favored than others, as in Europe and the US. The prized blood being O negative.

From BCC Research published May-2017:

People go missing quite easily in disasters among the chaos that is created. This is one of the main activities of the Red Cross. They act as a central resource for locating missing persons. That’s the same set up as ICMEC (International Center for Missing & Exploited Children). The Red Cross seems set up to traffic a different group of people, “vulnerable people”, people displaced and traumatized by disaster, manufactured disaster. What better disguise than a charity?

They have “Humanitarian Procurement Centers”. Their main objective is value for money (great ethos). The language used on their website and on Wikipedia is very ambiguous. Rarely do they state what they are procuring, but the word “humanitarian” is frequently used next to the word “procurement”.

From the International Federation of Red Cross and Red Crescent Societies:

Our mission is to provide effective and high quality procurement services to all members of the International Red Cross and Red Crescent Movement.

We are expanding our procurement services to third parties through our status as a humanitarian procurement centre and through our normal service mechanisms. We endeavour to provide best value for money to all our customers through fair competition and transparent procedures.

The Red Cross were very active in WW2. They were allowed into the camps for “humanitarian” reasons while collecting data on missing persons. They were part of the Nazi regime, and part of the experiment on human beings. They also kept the camps a secret.

From the Encyclopedia of World Poverty, Volume 1:

“During World War II, 179 delegates conducted 12,750 visits to prisoner-of-war (POW) camps in 41 countries and 120 million messages were exchanged. The Central Information Agency on Prisoners-of-War had a staff of 3,000, and a card index that tracked prisoners contained 45 million names.”

Swiss historian Jean-Claude Favez, who conducted an 8-year review of the Red Cross records, says that even though the Red Cross knew by November 1942 about the Nazi’s annihilation plans for the Jews – and even discussed it with U.S. officials – the group did nothing to inform the public, maintaining silence even in the face of pleas by Jewish groups.

The Red Cross & The Rothschilds

From the Rothschild Archive:

The Rothschild family has been closely associated with the British Red Cross since its inception in 1870 when Nathaniel, 1st Lord Rothschild (1840-1915) became one of the founder members of the committee of the National Society for Aid to the Sick and Wounded in War. He became chairman of the Society on the death of the founder chairman in 1901, and he held the post until his death in 1915. He was a key figure in the reorganisation of the Society into the British Red Cross in 1905. His son, Charles (1877-1923), was one of the first Council members of the newly formed British Red Cross from 1905, serving until his death in 1923. He took an active role, establishing financial systems and national procedures for the Society in 1909 and serving on the Executive Committee at the time of the First World War. Marie, Mrs Leopold de Rothschild (1862-1937) was twice mentioned in despatches during the First World War in connection with her work as President of the Middlesex Branch of the British Red Cross Voluntary Aid Detachment (VAD). She was also involved in the establishment of the Aylesbury Military Hospital, and was made a CBE for her work for the war effort.

The Red Cross has a global monopoly on the disaster industry while sucking the blood out of every tax payer to help fund it. US taxpayers are paying for it all. Feel sick yet?