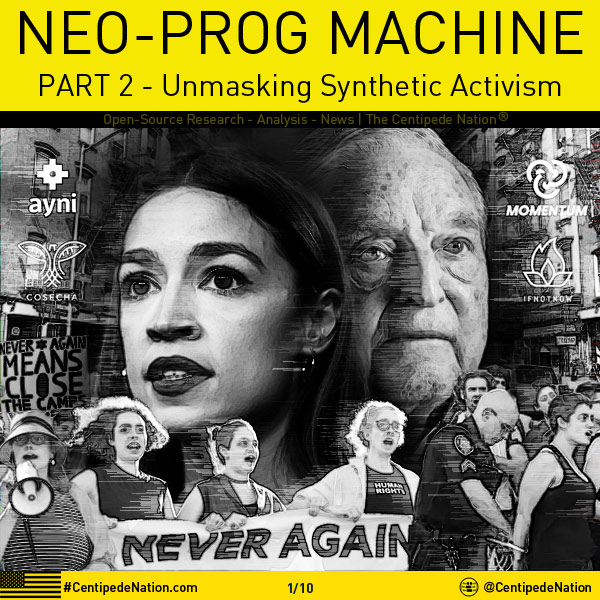 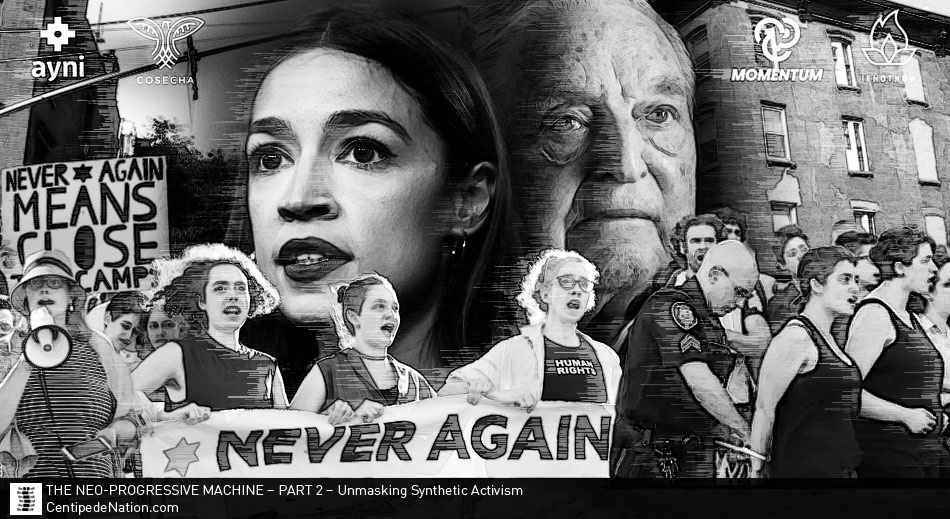 Activism is politically essential in demanding change when other options seem ineffective. There’s nothing more powerful than a well organized and unified people. But when people continue to be marginalized and divided, it makes it easier for the globalist elite to control the population by offering 2 opposite choices of the same coin. We like to think that many movements are started as ‘grassroots’, but what if you found out that most are synthetically manufactured to socially engineer and divide the population? How many of those involved in these so-called movements realize this themselves? For those that are conscious of the real plot, are they not the enemy?

In the first part of this series titled THE NEO-PROGRESSIVE MACHINE – The Trojan Horse Infiltrating The Left, we broke down how activists and protesters behind Alexandria Ocasio-Cortez and the Green New Deal are all connected and paid for by Soros, the UN, and more. In this report, we’ll take a dive into the newest ‘grassroots’ movement on the block, ‘Never Again Action’ and their affiliates.

Who is ‘Never Again Action’?

‘Never Again Action’ are Jewish protesters that want to shut down ICE, stop deportations and separation of illegal immigrant families. Fueled by Democrat politicians and media pundits, ‘Never Again Action’ has been at the forefront of extreme left-wing activism in the attack against Trump, CBP, ICE, and everyone else on the right that wants secure borders with better immigration policies.

Their anti-ICE campaigns are loaded with threats of violence in an effort to influence other groups and those non-affiliated to take part in their agenda. At a recent protest, these agitators have threatened the family of ICE contractor; GEO Group. The following day, a shooter directly targeted the GEO Group office and an ICE facility in San Antonio, Texas. They were also involved in the take-down of the American Flag at an ICE Facility in Colorado, which was then replaced with a Mexican one. Never Again Action has also shut down highways and even entry points to the Department of Homeland Security. Let’s not forget that last month an armed man used the same abolish-ice / concentration camp rhetoric and threw incendiary devices at a Washington ICE detention center. He was shot and killed shortly after.

Never Again Action wants to cause as much disruption as possible and get some of their members arrested so they can make headlines that not only builds a false narrative, but to recruit more people and persuade politicians to support their agenda. They even distribute a took-kit that provides talking points, training, social media tools, spiritual/mental/emotional care, and more.

Never Again Action has been endorsed by Soros shill Alexandria Ocasio-Cortez, and uses the same anti-ICE rhetoric such as calling them concentrations camps, which she was the first to use.

Direct actions of profound solidarity, just like these, hold enormous power to change our country.

Thank you @NeverAgainActn, for your courage, compassion, and selflessness in pursuit of justice. https://t.co/Bl0B6ZFcAZ

In the words of @NeverAgainActn:
“Never again is now.” #CloseTheCamps https://t.co/8KR1Nh1nYy

How Did Never Again Action Start?

The creation of ‘Never Again Action’ is credited to Serena Adlerstein, a 25 year old activist who says she was “upset at the treatment of migrants at U.S. border facilities”. She claims her Facebook status was turned into a nationwide movement.

People responded, and by that evening, on June 24, she was on the phone with other young Jews from around the country planning a protest, and hundreds of people had signed up on a Google doc expressing interest in joining.

The Main Stream Media loves to advertise these movements as organic uprisings, but when you look into it a little deeper, you’ll find out that Serena is actually an organizer with Movimiento Cosecha. If you look into ‘Never Again Actions’ involvement in fundraising legal fees for protesters that get arrested, they have a disclaimer that says Never Again Action was raising funds “on behalf of Movimiento Cosecha.”

Who is Movimiento Cosecha?

Movimiento Cosecha is a leftist illegal immigration advocacy organization which was created as a project by the Ayni Institute. They use propaganda to rally up illegal immigrants. While they have their own protests, they are often protesting side by side with Never Again Action. They were the ones that disrupted Joe Biden during the Democratic debate holding banners that read “Stop All Deportations on Day One” and chanting “Three million deportations”.

Movimiento Cosecha is also a coalition member of the Soros-funded Green New Deal. See our report to see how that all connects From Alexandria Ocasio Cortez, Obama’s Cronies, Bernie Sanders, the UN, and more.

Who is the Ayni Institute?

Ayni Institute is a nonprofit incubator and fiscal sponsor for new left-leaning organizations created in 2016 by Carlos Saavedra. Carlos Saavedra was national coordinator for the United We Dream immigrant advocacy coalition.

The Ayni Institute has not only founded Movimiento Cosecha, but has also helped create the following organizations:

Who is the Momentum Community?

Momentum Community is the organization that trains all of these protesters. The ‘trainers’ have been involved in multiple political movements and help organize protests on the international, national, and local levels at governmental offices, international organizations, corporations, universities, and more. Their ‘Movements’ include fighting for illegal immigrant rights, opposing the Jewish occupation of Palestine, and climate change, but their ‘trainers’ are also credited for working with Black Lives Matter, Occupy Wall Street, United Nations, and more.

Some Momentum trainers include:

Sara Blazevic a co-founder of Sunrise Movement (Sunrise are co-creators of the Green New Deal), is also a member and strategist at IfNotNow. She has also worked with the Divestment Student Network, a fiscally sponsored project of the Alliance for Global Justice which receives funding from both; The Open Society Foundation and the Tides Foundation.

Dyanna Jaye a co-founder and campaign director of Sunrise Movement, also tied to the United Nations.

Dani Moscovitch a founding member and national organizer with IfNotNow.

Randall Smith has worked with Change.org. Change.org’s directors are tied to John Podesta and George Soros. He has also worked with Corporate Accountability International, who received grants from the Rockefeller Brothers Fund. Corporate Accountability International’s co-founders also have ties to George Soros and the Sierra Club. Sierra Club funds and gives office space to the Sunrise Movement. He is also a member of the Article 25 and EmbraceRace, and has founded PowerLabs – a company that helps create campaigns for protests.

Thaís Marques is the Lead Digital Organizer for Movimiento Cosecha. She coordinated the “Sanctuary Campus” walkouts in the fall of 2016, where thousands of students staged walk-outs on over 150 campuses nationwide.

It should now be obvious that these movements are not organic, but synthetic. They are simply another manufactured mechanism created by the Deep State with George Soros in the shadows pulling the strings.

Now ask yourself this: Why does the media focus the blame on free speech platforms like 8chan for supposedly harboring hate, while giving a free pass to the organizations that actually train, produce, and activate violent left-wing radicals? We know the media are implicated in this agenda, but they can not stop what is coming. Are these groups are being investigated by the Trump Administration for their involvement? Let’s see what the FBI had to say about the recent shooting in Texas at the ICE and GEO Group facility:

“All the shots that we have found are on the floors where ICE had offices,” FBI Special Agent in Charge Christopher Combs told reporters during a Tuesday press conference. He said there is no question that the incidents were each a “targeted attack” that “could have resulted in the assassination of a federal employee.”
The field office director for San Antonio ICE Enforcement and Removal Operations blamed the attack on “political rhetoric and misinformation” from “various politicians, media outlets, and activist groups”.

This post only scratches the surface of the dark web behind these organizations. This should give other anons a good foundation to investigate further.

Read the next article of this series called THE NEO-PROGRESSIVE MACHINE – Part 3 – Exposing Antifa, The Crypto-Radicals, And The Takedown Of Their Agenda