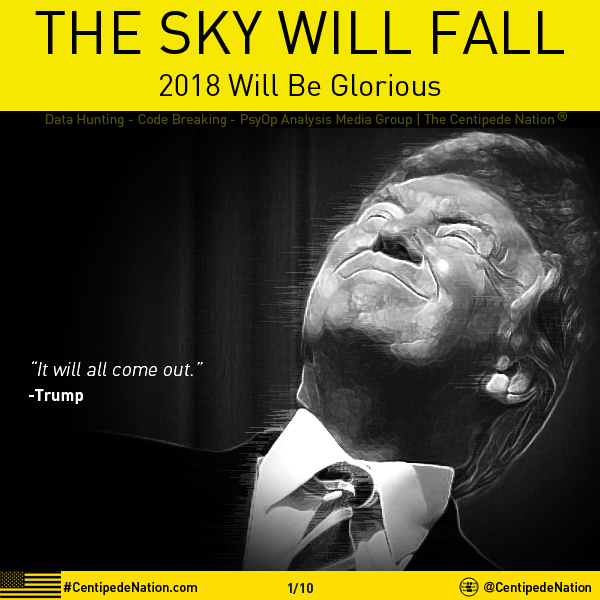 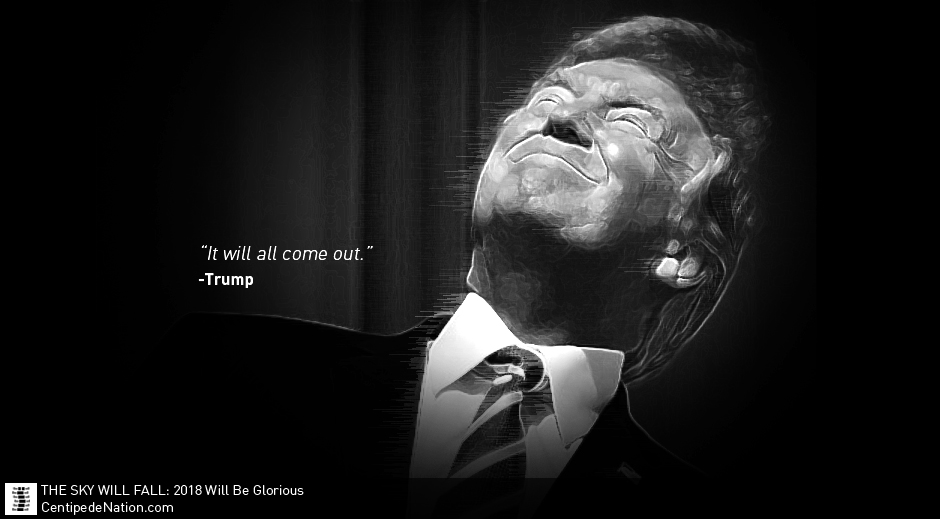 The Deep State are in a major PANIC. This week they will go all out with the Kanavaugh confirmation hearings, while they also try to delay the release of the FISA documents. But all will be well because the IG is being used to speed up the process. So without further adieu, let us break down this daily Q bread, and deliver us from evil.

Q !!mG7VJxZNCI No.293 📁
Sep 23 2018 11:36:42 (EST)
>>281
DECLAS of FISA = [RR] self-incrimination.
[RR] in charge of DECLAS.
Due to massive CONFLICT OF INTEREST IG HOROWITZ was TASKED to final review [speed].
[PREVENT LEFT ‘ENDANGER’ SOURCES & METHODS + MUELLER INTERFERENCE NARRATIVE]
IT WILL ALL COME OUT.
POTUS will not be BAITED TO FIRE when the release itself will FORCE RESIGNATION/TERMINATION [RR].
UK/AUS (+ OTHERS) MUST LEARN THE TRUE DEFINITION OF ‘ALLY’.
[RR] PREVENTED [FORCE] FROM SIGNING NEW FISA’s.
ALL SIGNERS ARE CURRENTLY UNDER GJ INVESTIGATION.
MCCABE MEMOS [NYT [RR] ARTICLE][PROVE] THE RATS ARE PANICKING.
2018 WILL BE GLORIOUS.
PREPARE FOR ‘SKY IS FALLING’ WEEK.
Q

>>293
Did the IG recommend [RR] step down or be fired [speed]?
Why was Rachel Brand removed?
HUSSEIN + MO actively campaigning for the midterm elections?
Normal?
PANIC.
D5.
Q

DECLAS of FISA = [RR] self-incrimination.
[RR] in charge of DECLAS.
Due to massive CONFLICT OF INTEREST IG HOROWITZ was TASKED to final review [speed].
[PREVENT LEFT ‘ENDANGER’ SOURCES & METHODS + MUELLER INTERFERENCE NARRATIVE]
IT WILL ALL COME OUT.

The declassification of the FISA documents will automatically self-incriminate Rod Rosenstein. He’s in charge of the declassification, which is why there is such push-back. So due to massive conflicts of interest, the Inspector General Horowitz was tasked to expedite the process by reviewing the FISA documents. By Horowitz taking charge, it prevents the left from using such narratives as “Trump is mentally unfit because he’s endangering the sources and methods of our Intelligence operations”. Plus, it destroys the narrative that Trump would be interfering with Mueller’s investigation. By Horowitz reviewing the docs, you can be sure that all the dirt will be exposed. IT WILL ALL COME OUT.

POTUS will not be BAITED TO FIRE when the release itself will FORCE RESIGNATION/TERMINATION [RR].

As you’ve already heard by now, Axios – a Bloomberg subsidiary – ran a story claiming Rod Rosenstein verbally gave his resignation to WH Chief of Staff John Kelly on Monday morning. But we believe that was just fake news – as we reported on our site. Trump will not be baited to fire Rosenstein since the declassification of the FISA docs will force his resignation automatically.

UK/AUS (+ OTHERS) MUST LEARN THE TRUE DEFINITION OF ‘ALLY’.

The UK, Australia, New Zealand, Canada, and other allies who participated in the spying operation against Trump, will all need to learn the true definition of an “ALLY”. What they’ve participated in, some would call an act of war. They are all panicking at the potential of damage it would inflict on the relationship with the U.S. let-alone their own citizens. See below at Trump’s subtle hint/reaction.

Rod Rosenstein has been forcefully prevented by signing any new FISA’s. Also all other FISA signers are currently under Grand Jury Investigations. Right now, Rosenstein is just an expendable pawn.

Last week the NY Times reported on a few memos from Andrew McCabe when he was the acting FBI Director. In it, the memos offered an account of Rod Rosenstein trying to secretly record Trump and set him up to invoke the 25th ammendment. But Rosenstein denied these allegations and called them false. Regardless, this is the Deep State trying to bait Trump into firing Rosenstein through the media’s fake news reporting. Trump’s too smart for that though.

Did the IG recommend [RR] step down or be fired [speed]?

Q is asking if the IG recommended Rosenstein step down, or wait to be fired. It doesn’t really matter because the release of the FISA docs will have Rosenstein removed anyway, and the IG is there to help speed it up.

Why was Rachel Brand removed?

Rachel Brand was probably dismissed because as Q has mentioned in previous drops, she played a role in the spy operation against Trump. But that’s not what Q is actually pointing to here. Q’s using Rachel Brand’s situation as an example of what would happen when Rosenstein gets removed. There is a statute known as the “Vacancies Reform Act” which allows the President to assign whomever he wants temporarily for up to a 210 day period. According to the DOJ’s succession statute guidelines, the next runner up would be the Solicitor General Noel Francisco, but there’s a pool of individuals from which the President can draw from too.

The following is the screenshot that Q linked to in regards to Rachel Brand’s situation when she was dismissed from her position as Associate Attorney General.

As you can see from above, Jesse Panuccio has replaced Rachel Brand and is now the next in command behind Rosenstein. But since he’s not holding a Senate-Confirmed position, he wouldn’t replace Rosenstein. Noel Francisco would technically be next, but since Trump can choose anybody temporarily for up to 210 days, we can only assume who will replace Rosenstein, but our bets are on Noel.

Think About This:
If Trump replaces Rosenstein with his own pick, then imagine if his own pick goes ahead and fires Mueller, that would be bad optics for Trump. This is why our bets are on Noel Francisco as being the successor without Trump taking advantage of the “Vacancies Reform Act”.

Hussein and his husband Michael Obama are going around the country actively campaigning for the midterm elections hoping to put a stop to the PAIN that Trump will inflict onto them. The panic is real and it’s causing them to act desperately in abnormal ways. They are panicking. D5 = highest classification of an avalanche. In other words, those guys are about to get crushed. 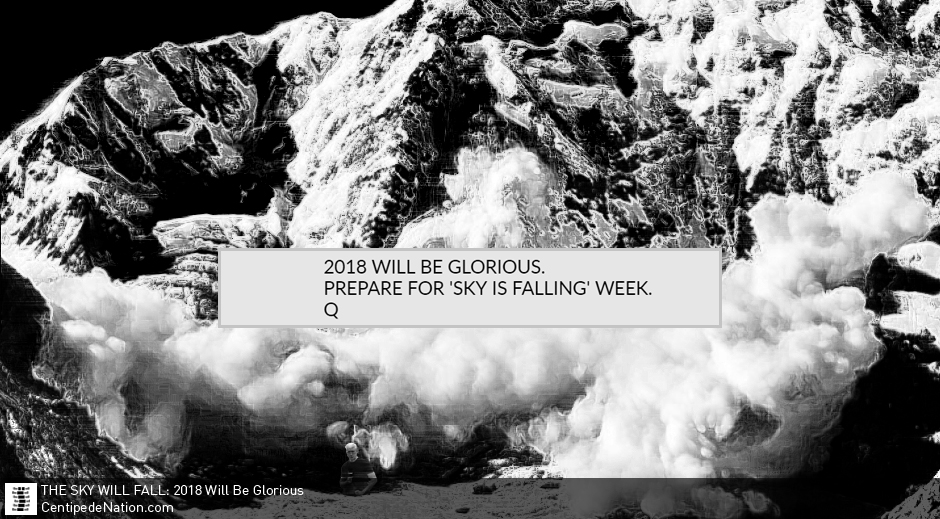