THE TRUTH – The Choice To Know Is Yours 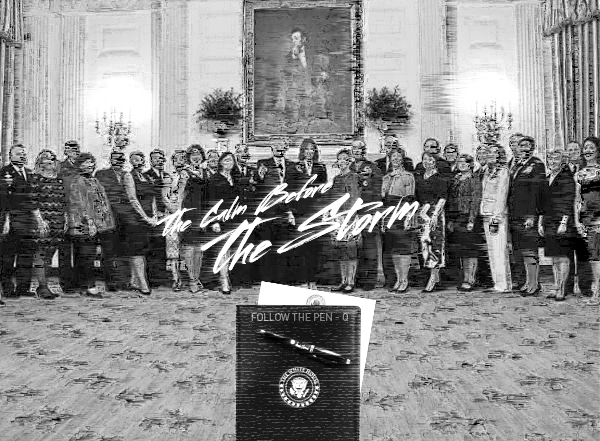 FISA BRINGS DOWN THE HOUSE.

When will Trump Declassify The Redacted FISA Documents? Why should he, and what happens when he does?

For a long time, the Obama administration were participating in illegal activities using assets within our intelligence agencies. But there were 2 people who weren’t on board – Admiral Rogers, head of NSA and General Flynn, head of DIA. Both were working behind the scenes to expose these illegal activities.

DID YOU KNOW?:
Many people forgot that 10 days after the 2016 election, Admiral Rogers quietly payed Trump a visit. After James Clapper and Ash Carter found out (Admiral Rogers’ bosses), they wanted Rogers fired for not disclosing the contents of the visit. 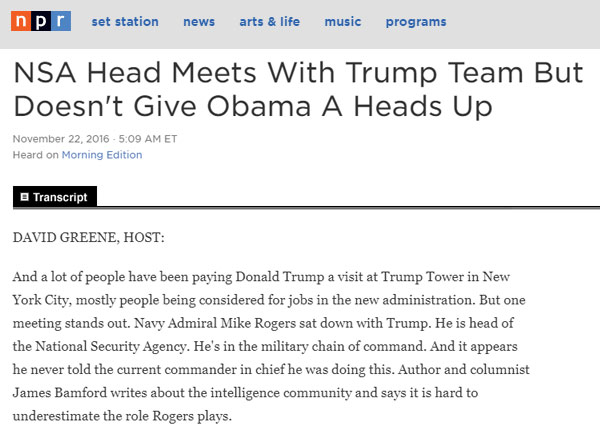 Source: NPR
The same day Rogers met with Trump, Trump announced he was moving all activities to his New Jersey Golf Club. Think about that.

The NSA maintains a database that can be accessed by the DOJ and FBI for FISA-related intelligence. In 2016, Admiral Rogers ordered an audit of all requests to the database after noticing some suspicious activity. The audit revealed an abuse of database requests by FBI contractors and Rogers immediately blocked their access. After Rogers blocked access to the private contractors, they exploited a loop-hole. They had bad-actors within the DOJ & FBI use their own credentials to access the database for them. After information was queried, it was then funneled to the private contractors to continue the fabrication of what is known today as the Dossier. On October 21, 2016, Rogers shut down “about query” activities. So the bad-actors moved to Plan B; That same day, they were able to get a TITLE 1 FISA court order on Carter Page who was brought on as a policy adviser to Trump’s campaign.

Let’s cut to the chase; From 2013 – March 2016, Carter Page was an FBI under-cover employee that helped convict a Russian agent. Then when it suited the FBI, they had him play a different role as a “foreign spy” to justify a TITLE 1 FISA court order. This gave them a legal way to spy on the Trump campaign. [“The Insurance Policy”]

THINK ABOUT THIS:
If Carter Page was responsible for convicting a Russian agent in 2013 and remained an FBI under-cover employee up to May of 2016, how is it possible that a few months later Carter Page is put under a FISA Title 1 surveillance warrant as an alleged Russian agent? Hint: He wasn’t. The DOJ National Security Division and the FBI Counterintelligence Division, knew he wasn’t a Russian agent.
Source: House.Gov (See Page 16)

When Trump Declassifies the FISA application, it will show how Hussein, HRC, the Deep State – including those in both parties, foreign intelligence agencies like FVEY’s (includes the British), the MSM, and other assets were conspiring to take down Trump using a false Russian narrative. So when will POTUS declassify, and what comes after?

Did you catch that? Nunes specifically said the declassification will reveal “Clinton-paid-for dirt was used to get a warrant to spy on an American citizen using our secret counter-intelligence capabilities in this country.”

Also, for optics, Nunes & members of the House are requesting Trump declassify 20 pages of the FISA application.
Here is a link to Nunes’ letter.

REMEMBER:
John Huber – the federal prosecutor based in Utah – has access to 470 attorneys and investigators from the Office of Inspector General.

Will Huber take action if he finds anything? We have no idea. He could be swamp.

Will Trump declass everything now? No idea. We haven’t seen any sign of that yet, but there’s definitely spontaneity in Trump’s approach.

What comes after? We’ll see…