Update: Antifa and BLM Hunted Down a Trump Supporter and Murdered Him On The Spot – 4Chan identifies the alleged shooter…

A Trump Supporter was shot and killed in Portland after Antifa and BLM terrorists hunted members of the pro-Trump car parade that arrived earlier in the day.

It was estimated over 600 vehicles arrived in Portland on Saturday morning for pro-Trump demonstrations. It was later in the evening when things started heating up.

Users from 4Chan seem to have identified the guy who shot the Trump supporter as Michael Reinoehl. Here’s a video of him being interviewed by Bloomberg a last month:

Exclusive: The victim of last night's deadly shooting in downtown Portland is Aaron Danielson, who went by Jay. His family has been informed of his death.

Portland Police have not released details about their investigation and the shooter is at-large. #PortlandRiots pic.twitter.com/4y8j9fSJ5K

I’m at a loss for words. Antifa killed my friend in Portland tonight. I’m heartbroken. Completely devastated. I have nothing left to say.

Listen closely. This was the instant of the murder in Portland.

A: "Hey! Hey, we got one right here! We got a Trumper right here!"
B: "Right here?"
<Two gunshots>pic.twitter.com/UxUGdKZ1tJ

Edited to show prior to the shooting.

Shooter appears to be wearing a white shirt with black backpack and has sandals. Face is not shown clearly but you can see him as he walks across the crosswalk.

Both involved appear to be white male’s. pic.twitter.com/ArpZ7k24Cl

Just a few minutes before the murder, the killer is seen standing with a half a dozen other BLM/ANTIFA rioters.

Portland shooter is 100% part of BLM/Antifa. He's all over the video 7-8 mins earlier next to the bullhorn guy.

White kid in sandals talking to a girl in a striped dress.

He said to her "Hey, I hope I didn't scare you earlier." 3 mins before he shoots the Trump supporter. pic.twitter.com/tH4Lx0hfGi

Possible sighting of the same Antifa terrorist who killed the patriot is seen a day before in Camas, Washington:

‘I’m Not Sad That A Fu*king Fascist Died Tonight’ – BLM and Antifa rioters cheering on the murder of a Trump supporter:

“I am not sad that a f**king fascist died tonight,” yells a female Antifa militant at a gathering in downtown Portland. The crowd laughs and cheers. The victim was a Trump supporter. pic.twitter.com/XK4Czzseia

Here is the full live stream from the guy who caught the shooting on video.

(Real) Medics tried to save the shooting victim in downtown Portland. It is a white male contrary to what antifa journalists and accounts said about it being a black victim. pic.twitter.com/jzE2ffqN73 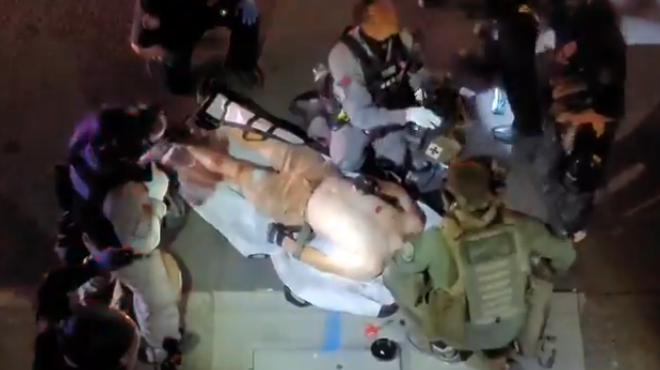