Dozens of business owners in the downtown Louisville district found themselves being extorted by Black Lives Matter upon receiving a letter with demands aimed at bringing change to the district based on race or face consequences.

WDRB News reported that the following letters came with a deadline of Aug. 17 and a caveat that stated restaurants should cave to demands for “racial reparations”, or be prepared for an onslaught of online negative reviews and social media posts about their businesses.

Here is their ‘contract’:

Did you notice the ‘Repercussions of non-compliance’ if businesses don’t accept or adhere to the contract?

Here is a sign they want businesses to display in their windows: 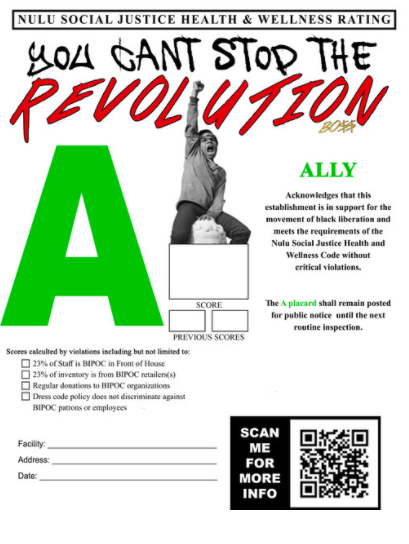 According to WAVE 3 News a Gallery owner has already caved in with additional virtue signaling by stating “I felt relieved to see the demands!… I read through them and was so happy to see that I can actually DO all these things… In my eyes, (the contract) is not a matter of providing validation to Black Louisvillians, but correcting unjust practice and sharing out opportunity. The people who need to learn the Clarksdale history are mostly white.”

Others have resisted. This past weekend, the Cuban community rallied behind restaurant owner Fernando Martinez after he was told by the BLM that he “better put the letter on the door so your business is not f*cked with.” After Martinez was vocal about his opposition regarding the demands on social media, the BLM mafia confronted him outside his restaurant, smashed a flower pot outside his business, and accosted him on why the demands needed to be met.

Here is a screenshot of one of his Facebook posts: Here’s a video of the Cuban community supporting the restaurant owner:

Restaurant owner Fernando Martinez Amar addresses the crowd, saying he and the Cuban community support all communities. He says there are people out there who are trying to define him as a person and a business owner without speaking to him. @WLKY pic.twitter.com/a7yllDyngO

Notice the “NO 2 SOCIALISM IN AMERICA” signs? Other signs spotted read “WE ALSO HAVE A DREAM: TO LIVE WITH PEACE & JUSTICE AWAY FROM SOCIALISM” and “WE ARE PEACEFUL PEOPLE BUT DON’T TREAD ON US”.