Chris Langan: Klaus Schwab admits to mentoring not just Trudeau and Merkel, but Putin himself for criminal plan of world domination… 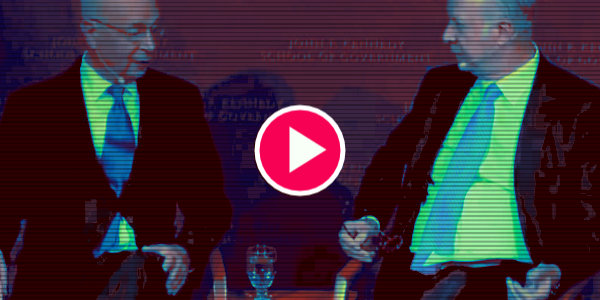 Very interesting. I just watched a video containing an old clip featuring a sycophantic interview of Klaus Schwab by CFR / Trilateral Commission / Bohemian Grove member David Gergen at some globalist shindig they put together. I’m still not sure I heard it correctly.

But first, what do the names Emmanuel Macron, Angela Merkel, Justin Trudeau, Jacinda Ardern, Sergei Brin, Larry Page, Mark Zuckerberg, Anderson Cooper, Leonardo DiCaprio, Ashton Kutcher, and Charlize Theron have in common? They’re former Schwab proteges who were recruited decades ago as “Young Global Leaders”, taught how to infiltrate the governments and subvert the constitutions and cultures of Western nations, and charged with cementing globalist domination and committing genocide against White Western majorities. This we already knew.

Here’s the surprise: according to the interview, this dark distinction is shared by Vladimir Putin. Schwab found and mentored not just little Justine Trudeau and Teutonic Battle Axe Angela Merkel, but Russian dictator Vladimir Putin himself. I don’t find it surprising that Schwab intended to mold them all into the tyrannical caricatures that we see before us today, or that their kindly “Uncle Klaus” deserves full credit for their antihuman mindset and every dastardly deed they’ve ever done. That much is common knowledge. What surprises me is that Schwab would take the risk of admitting it, especially in the case of Putin. It’s not good for the kind of political theater in which these people habitually engage.

In short, Klaus Schwab is foolishly crowing about having trained and planted treasonous globalist agents in our governments, including the government of Russia, for the purpose of ensuring that our lives and destinies would be totally controlled by a gruesome gaggle of shifty, shady, power-drunk globalist vampires who wouldn’t know what it’s like to do an honest day’s work if you dressed them in orange jumpsuits, put them on a chain gang, stuck picks and shovels in their soft pink-palmed hands, and cracked a bullwhip over their pointy little heads.

The set-up has been long in the making. Schwab and his fellow oligarchs are absolutely certain that they’re going to win. Better hope they’re wrong. A win for them means the total loss of basic rights, human dignity, and every kind of freedom for every decent human being on the planet.

At one time they could have tried to deny it. But at this point, they might as well deny that a spoonful of sugar helps the medicine go down (even when it’s deadly).