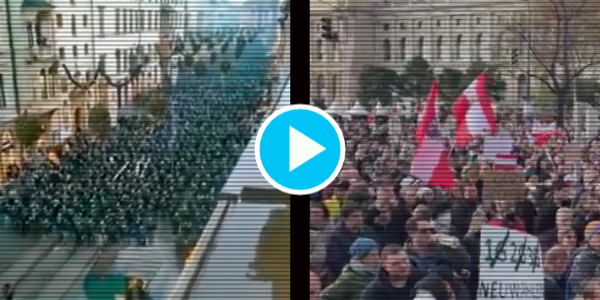 On Saturday, protests against Covid restrictions were held in Switzerland, Croatia, Italy, Northern Ireland, and the Netherlands, a day after Dutch police opened fire on protesters and seven people were injured during the riots in Rotterdam.

Starting Feb. 1, Austria will make vaccines mandatory for everyone.

And many others.
Which the media ignores.pic.twitter.com/JHdv2XY6m0

Thousands of people were out in #Austria protesting against the country's authoritarian lockdown. Now, both unvaccinated AND vaccinated people are under orders to stay at home. Austrian government officials are hitting the panic button.pic.twitter.com/b20J7pyq7M

Austria… government has moved to lockout the unvaccinated from public places… it’s completely backfired and the only people not welcome in public are the politicians.
🔥❤️🔥 pic.twitter.com/AxJF87UpYC

Austria's government tried locking down The Unvaccinated and triggered waves of protest.

So now it's locking everyone down, including the protesters, and forcing all to take the jab under penalty of fine – "which can be converted into a prison sentence" https://t.co/IzBRyfih1b pic.twitter.com/eHkHp3XH7K

Austria enters full lockdown tomorrow. Here is what the streets look like.

Austria put the unvaccinated under lockdown and will require MANDATORY vaccination.

This is the peoples response.

Tens of thousands took to the streets of Vienna today to protest for freedom👇pic.twitter.com/Oph5AlftEs

An absolutely enormous protest in Rome against the Italian government’s no jab, no job and vaccine passports enforcement.

All over Europe, the people are rising up against authoritarianism.#NoVaccinePassports pic.twitter.com/9UHqz90p3B

Vaccine Passports won’t set you free, they will tie you to the whims of government always.

Croatians singing before heading off to confront HRT because of their lies. HRT is Croatia's public broadcasting company. pic.twitter.com/kDTxuy1yab

Zagreb Croatia 20.11.2021 people are chanting "We are not giving you our children!" pic.twitter.com/QcpG05AIfQ