Highlights From Trump’s Speech At CPAC: “I May Even Decide to Beat Them for the Third Time”… 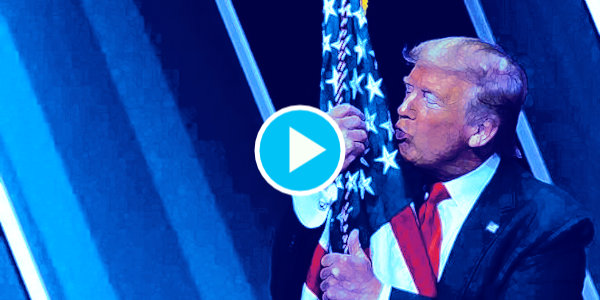 TRUMP: "Joe Biden has had the most disastrous first month of any president in modern history… In just one short month, we have gone from America first to America last." #CPAC pic.twitter.com/O4I5WiRltJ

I may even decide to beat them a third time – Donald Trump talking about the democrats in 2024. I see him all the time but I still miss him on the world stage. Simply awesome! pic.twitter.com/KjkQgpJ0ZS

"With your help we will take back the house, we will win the Senate and then a Republican president will make a triumphant return to the White House. And I wonder who that will be."

TRUMP: “We must have Voter ID” pic.twitter.com/iXZWTptWgT

Trump hits Biden on his comments about vaccine availability before he took office.

"I actually believe he said that because he didn't really know what the hell was happening." https://t.co/VlT7z8drtO pic.twitter.com/5TmEAKqnVN

TRUMP: "There's no reason whatsoever why the vast majority of young Americans should not be back in school immediately. The only reason that most parents do not have that choice is because Joe Biden sold out America's children to the teachers' unions." #CPAC pic.twitter.com/cqvJofpQ5S

“Our movement of hard working American patriots is just getting started and in the end we will win.” pic.twitter.com/2gt9IxKgO7

TRUMP: "We have the Republican Party… I am not starting a new party. That was fake news." #CPAC pic.twitter.com/192lpOwgXA

TRUMP: "Democrats should suffer withering losses in the midterms and to lose the White House decisively four years from now… I may decide to beat them for a third time." pic.twitter.com/QhDRd7km4t

TRUMP: "Democrats used the China virus as an excuse to change all of the election rules without the approval of their state legislatures… It had a massive impact on the election" #CPAC pic.twitter.com/iCqW9ll3cH

TRUMP: "The time has come to break up big tech monopolies and restore fair competition."

He then compliments GOP governors like Ron DeSantis who have gone after big tech. #CPAC pic.twitter.com/3uhRfGP52x

TRUMP: "Trumpism means strong borders… no riots in the streets. It means law enforcement. It means very strong protection for the Second Amendment… It means support for the forgotten men and women who have been taken advantage of for so many years" #CPAC pic.twitter.com/WA555DbUzK