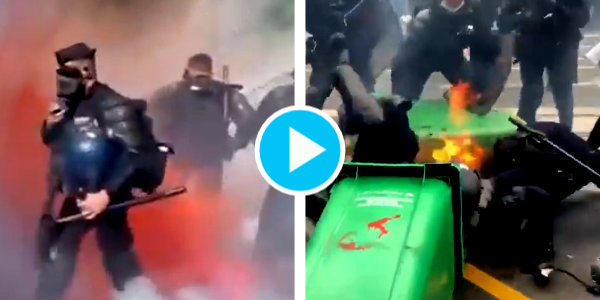 French paramedic: What happens if you don't have your vaccine passport In France? pic.twitter.com/GwFZdmRmHd

All across France, our Brothers and Sisters aren't putting up with vaccine passports and mandatory vaccinations… PATRIOTES!!! VIVE LA LIBERTÉ!!! pic.twitter.com/Nqzrh1UBR0

Not just unvaccinated protesting but VACCINATED TOO! Protesting against the coercion and unlawful discrimination. A city of almost 360,000 people and most are out demonstrating. pic.twitter.com/sXNoW3SFKL

Water cannons and tear gas have been depoloyed against protesters in Paris, France.

31 July 2021
Millions are taking to the streets in Paris, Nice, Montpellier, Nantes, Strasbourg, Reims, Toulouse, Marseille, and many more cities across France to protest against vaccine passports and mandatory vaccinations. pic.twitter.com/ZbalWiRxgA

Hundreds of thousands of protestors march again in Paris, and all over France in opposition to vaccine passports, chanting "liberté, liberté!" pic.twitter.com/XFLPor4Sqx