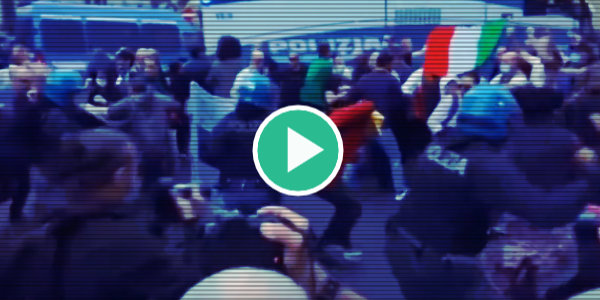 Starting Oct. 15, 2021, all Italian workers, from magistrates to maids, must show a vaccine passport to work. Massive protests have erupted in Italy in opposition.

Support our brothers and sisters in 🇮🇹#Italy on the frontline fighting corporativist state/medical #fascism, and fighting for our natural & human rights… pic.twitter.com/EuRur7lpmo

NOW – Large protest against the vaccine passport in #Rome, Italy. From October 15, the health pass will be compulsory for Italians to get to their places of work, both in the private and public sectors.pic.twitter.com/cxC8Vbo6TB

HAPPENING: Huge crowd of dock workers and others block the entrance to the Port of Trieste, Italy to protest against the compulsory vaccine passport, which goes into effect today. Other large protests are currently underway across the country.pic.twitter.com/8GTamwIUCN

The Italian unions have condemned vaccine passports. Italian dockers have stated that most of Italy's ports will be halted if vaccine passports are made obligatory for all workplaces.#SiamoTuttiPortuali ♥️🇮🇹#NoVaccinePassports pic.twitter.com/1eOolpD2pP

Massive protests have erupted all across Italy, where over a million workers have gone on strike after the government announced a vaccine mandate for nearly all forms of employment.pic.twitter.com/I4Uo4mG4fS

ITALY, GENOA – port workers, drivers and citizens block access to ports and roads and vow to stand their ground until the vaccine passport requirement to work is scrapped.

Tens of thousands took to the streets all across the country to protest against mandatory covid passports for work.

This is just in Bologna👇pic.twitter.com/SRuoSleZU3

University students hold their own protests in Milan, Italy:

Students in Milan, Italy protest against the the implementation of the health pass (green pass) in Italy.

Protests are taking place all over Italy today.

Today (Oct. 15) was the deadline for workers and other sectors to be vaccinated or face suspension. pic.twitter.com/7iUoi6OlAM

Even students are protesting against the covid passports in Italy today.