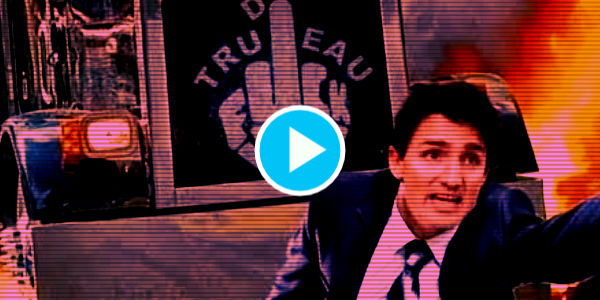 “To our fellow Canadians, the time for political overreach is over,” their GoFundMe page says. “Our current government is implementing rules and mandates that are destroying the foundation of our businesses, industries and livelihoods.”

Judging by comments and footage on social media, the people support the truckers.

We support #TruckersForFreedom Rise Up for Freedom and Democracy against growing Tyranny and Dictatorship. Support #Truckers Convoy heading to Ottawa, Canadians United from coast to coast stand on bridges or side of the road and wave in solidarity for their courageous efforts👋 pic.twitter.com/xv4iJTqXbX

Whoa! A Canadian trucker part of the freedom convoy en-route to protest vaccine mandates shares a video of supporters cheering him and others on in Langley, British Columbia. pic.twitter.com/we6cyzauHB

According to #TruckersForFreedom from #BritishColumbia, the convoy could bring together 150,000 truckers from coast to coast. Number of participants would already be 70,000 en route to #Ottawa. The Patriots are coming!#TruckerConvoy2022 pic.twitter.com/1cKhON1irY

I've joined the Truckers CB radio group, have a listen!

Crowdfunding is over 2million for the trucker freedom convoy in Canada.

They could do it!
They could shut the whole game down🤯.
Go truckers go!!!!!

Any Truckers needing repair during the convoy….offer of help anywhere from Windsor to London from this man. Bless those that help #FreedomConvoy2022 #TruckersForFreedom #ItTakesAVillage pic.twitter.com/3k0c7ScU7a

🇺🇸 #USA Trucker rally for freedom starts in the USA!

Canada has the worst media in the worldhttps://t.co/oFwo1RYGB8

Stand by our Truckers!
Freedom Convoy: Give them hell in Ottawa, and let's take back our rights! #TruckersForFreedom pic.twitter.com/ZmXbNn5arV