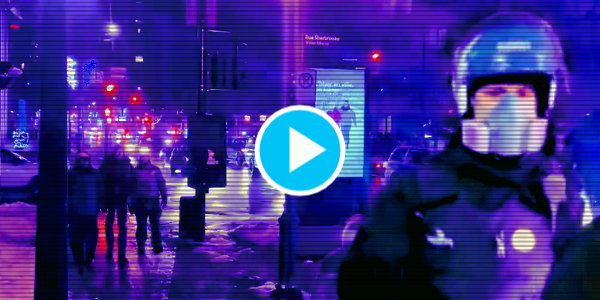 The Quebec government has reintroduced a curfew from 10 p.m. to 5 a.m. to fight – what they claim – is a rise in Omicron cases.

A police force on bikes and vans ordered everyone on the street to comply with the government curfew or face $1000-$6000 fines.

A group of protesters marched to the Premier of Quebec’s office, chanting “No is no!” in response to the province’s curfew laws. Several arrests were made that night.

This is not a dystopian thriller. This is Montreal, Quebec, Canada:

People in Montreal, Quebec, Canada are still outside 4 minutes before the mandatory 10pm curfew begins.

Police on speaker telling people to get home or expect fines.

Police in Montreal, Quebec, Canada patrolling the streets telling people on speaker that the curfew begins at 10pm or else they will get a fine between $1,000 and $6,000.

Montreal police are picking out protesters one by one to arrest and fine between $1,000-$6,000 at the protest against the mandatory 10pm curfew in Montreal, Quebec, Canada. pic.twitter.com/CdJn5GzqGu

Montreal Quebec on lockdown and places of worship closed. Citizens protesting against the corrupt government! pic.twitter.com/mHODCJz8rg

You can lock down montreal citizens but you can’t keep them quiet. They are PARTY ANIMALS! This was last night, New Years Eve. 😂😂😂 pic.twitter.com/x0rIAUGSMg