Thousands of cattle have died in southwest Kansas, leaving everyone puzzled by the mysterious mass death… 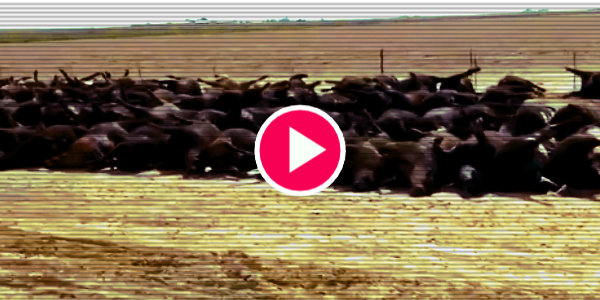 The official story is that temperatures and humidity spiked over the weekend in western Kansas, causing heat stress for cattle. Cooling winds disappeared, preventing cattle from acclimating to the sudden change.

Note how they all died at relatively the same time and in a similar bloated state. Were their feeds poisoned?

The MSM has begun their narrative about global food shortage.

Apparently this is video of the 3000 cattle that died in SW Kansas. Original tweet said heat, farmer I talked in Kansas said it wasn’t the heat. pic.twitter.com/OlPks10ji8

Thousands of cattle have dropped dead in Kansas and CBS news is attributing climate change as the culprit. But it’s funny I looked up the weather in June in Kansas going back 15 years and it’s been 88-95 degrees. Same as now. How come they weren’t dying before?

Other’s are saying that more than 10,000 cattle dropped dead, and not the few thousand originally reported.