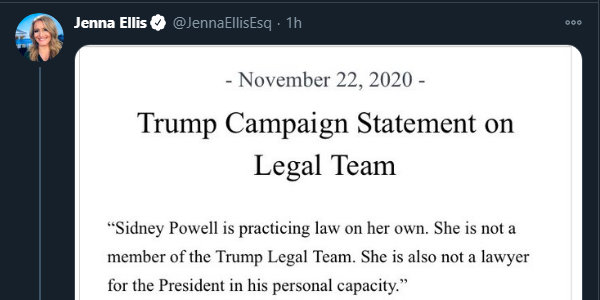 .@SidneyPowell1 has been suspended from Twitter for 12 hours. She understands the WH press release & agrees with it. She is staying the course to prove the massive deliberate election fraud that robbed #WeThePeople of our votes for President Trump & other Republican candidates.

Lin Wood jumps in with his own explanation:

Sidney Powell @SidneyPowell1 & I are more alike than we are different.

We are fighting different legal battles for the same clients – We The People.

UPDATE 2: User submitted the most logical explanation we’ve seen yet. So we had to make it its own post.
View here: https://centipedenation.com/transmissions/anon-insight-into-the-sidney-powell-trump-campaign-legal-team-statement/
UPDATE 3: Statement from Sidney Powell via CBS News:

JUST IN: Statement from Sidney Powell via CBS News. pic.twitter.com/vJaXSs3UqF

UPDATE 4: The following comes from General Flynn, and it is a statement by Sidney Powell:

STATEMENT FROM SIDNEY POWELL TO "WE THE PEOPLE"

STATEMENT FROM SIDNEY POWELL TO “WE THE PEOPLE”
I agree with the campaign’s statement that I am not part of the campaign’s legal team. I never signed a retainer agreement or sent the President or the campaign a bill for my expenses or fees.

My intent has always been to expose all the fraud I could find and let the chips fall where they may–whether it be upon Republicans or Democrats.

The evidence I’m compiling is overwhelming that this software tool was used to shift millions of votes from President Trump and other Republican candidates to Biden and other Democrat candidates. We are proceeding to prepare our lawsuit and plan to file it this week. It will be epic.

We will not allow this great Republic to be stolen by communists from without and within or our votes altered or manipulated by foreign actors in Hong Kong, Iran, Venezuela, or Serbia, for example, who have neither regard for human life nor the people who are the engine of this exceptional country.

#WeThePeople elected Donald Trump and other Republican candidates to restore the vision of America as a place of life, liberty and the pursuit of happiness.

You may assist this effort by making a non tax-deductible contribution to www.DefendingTheRepublic.org. #KrakenOnSteroids”

Jenna Ellis posted the WH statement on her twitter feed that read: “Sidney Powell is practicing law on her own. She is not a member of the Trump Legal team. She is also not a lawyer for the President in his personal capacity.”

The initial impression was that she was indeed part of Trump’s campaign legal team based on a few variables. For one, Trump seemed to give that impression with this tweet:

I look forward to Mayor Giuliani spearheading the legal effort to defend OUR RIGHT to FREE and FAIR ELECTIONS! Rudy Giuliani, Joseph diGenova, Victoria Toensing, Sidney Powell, and Jenna Ellis, a truly great team, added to our other wonderful lawyers and representatives!

It’s definitely a strange turn of events when MAGA supporters start questioning past statements from the campaign team:

More, why did Jenna, just a few days ago, state that she was part of the team? pic.twitter.com/yf8AoZtlKt

This is probably the most unprofessional thing I’ve ever seen. Wow.

It could be that she was never part of the team to begin with and acting in her individual capacity.

All this means is that the suits that Powell is filing are not part of the President's legal strategy. The pres. legal stagy suites are not needed to reverse the election results and are much harder to prove than the Dominion stuff.

Sidney already clarified that she and L. Lin Wood are not part of any government agency, so I'm assuming this is for legal reasons us non-legal people don't understand. I have no doubt Sidney is still fighting for our country and our freedom!