TWEET THREAD: Who is Harley Pasternak, the man whom Kanye West has accused of trying to institutionalize him, drug him into oblivion, and take his kids away?… 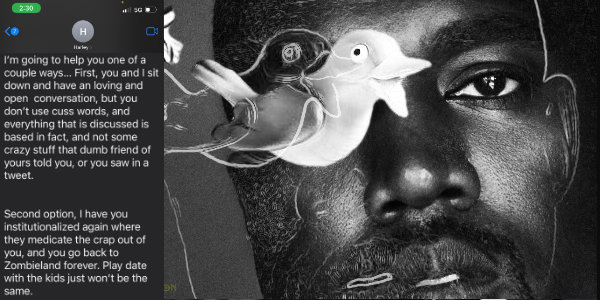 Who is Harley Pasternak, the man whom Kanye West has accused of trying to institutionalize him, drug him into oblivion, and take his kids away?

As it turns out, this "personal trainer" is connected to psychological operations, the Canadian military, and other strangeness…

Finding information on Harley has become complicated by recent events. For some odd reason, his Wikipedia page was altered after Kanye's tweet. I wonder why?

On the left is his current page – on the right the archived version from earlier today.

Here's the list of Harley's noteworthy clients. Someone doesn't want you to see this. Note that some of his former clients had mental breakdowns or died under suspicious circumstances: Mac Miller, Brittany Murphy (not listed), and others. (credit to @uncledoomer for the last two) pic.twitter.com/8ALvKQVmgU

Also worth noting is the fact that Kanye West was hospitalized in late 2016.

Where was he at the onset of his alleged breakdown?

Note that in the text messages Kanye posted, Harley threatens to have him institutionalized "again." (!!!) pic.twitter.com/AX1NhEB7zu

But just who is Harley Pasternak?

Let's take a look at his background.

At first glance, nothing stands out. He's just an educated man with a master's degree in exercise and nutrition science.

But that isn't the full story… pic.twitter.com/l0IFYgHa0h

The Department of National Defence (DND) is the Canadian government's department which "supports" the Canadian Armed Forces. It's a civilization organization, a support system of sorts for the military. I'm not sure what the US equiv. would be. DOD? DHS?

Regardless, Harley Pasternak worked as a scientist for two years at DRDC Toronto, one of Defence Research and Development Canada's military research stations. (The DRDC is a part of the DND.) pic.twitter.com/nam5juMvK8

What sort of stuff is researched at DRDC?

"Social and psychological factors that affect the resolution of conflict."

But we don't have to rely on a website to tell us.

Here's Harley Pasternak in his own words:

"Working for the military, I wasn't governed by the same laws that the typical person was, so I could look at the impact of certain drugs that are not every day things."

The stuff with the DND gets weirder.

This branch of the Canadian government once included the Defence Research Board (DRB).

The DRB quite literally funded MKUltra, as did the CIA. This program involved forced experiments with drugs, sensory deprivation, and brainwashing. pic.twitter.com/7T0DDKrsAF

I'm not a particularly conspiratorial guy, truth be told. But hey, if elites did assign handlers to celebrities, particularly those deemed unpredictable or hard to control, with the purpose of keeping those celebrities in line, those handlers would look *a lot* like Pasternak.

But it does mean that he's serving powerful interests, or at the very least has their backing.

Even the best personal trainer lacks the ability to get someone institutionalized on a whim.

Pasternak is likely an intermediary for more powerful, shadowy forces in Hollywood.

Most of this thread was drawn from Patrick's Telegram so be sure to follow him over there https://t.co/wUV9K4UXv2

Say hello to Dr. Michael Farzam! He was/is Kanye's doctor. The good doctor was personally responsible for institutionalizing Kanye back in 2016, an incident which involved Harley Pasternak as well. pic.twitter.com/MmuVY1Nljr

Kanye was taken to a hospital on November 21, 2016 after Dr. Farzam called 911. Farzam claimed Kanye was "acting erratically."

Here's the 911 call. You can hear Dr. Farzam on the phone. Listen as he insists that both police and paramedics be sent over to Pasternak's house to deal with Kanye. pic.twitter.com/h0l6ctR95p

Many celebrities breakdowns have probably been motivated by stress with no foul play involved. But the text messages Kanye posted were pretty damning: "Do what we say or lose everything." That raises questions about other celebrities whom we've been told to write off as lunatics.

Reached for comment, Pasternak, who is Jewish, told Newsweek, "I think Kanye has a history of mental health issues, and it appears that he's probably going through an episode right now.https://t.co/PKwUQDpIIC

Starwackers!! Haven't heard that since Quaid