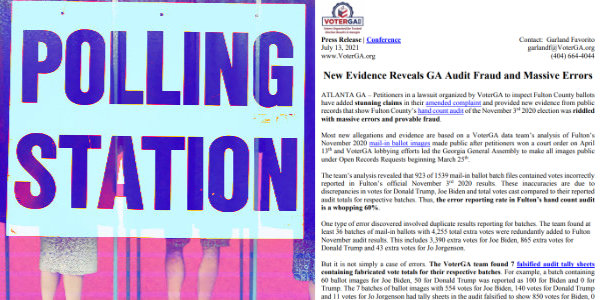 Most new allegations and evidence are based on a VoterGA data team’s analysis of Fulton’s November 2020 mail-in ballot images made public after petitioners won a court order on April 13th and VoterGA lobbying efforts led the Georgia General Assembly to make all images public under Open Records Requests beginning March 25th.

The team’s analysis revealed that 923 of 1539 mail-in ballot batch files contained votes incorrectly reported in Fulton’s official November 3rd 2020 results. These inaccuracies are due to discrepancies in votes for Donald Trump, Joe Biden and total votes cast compared to their reported audit totals for respective batches. Thus, the error reporting rate in Fulton’s hand count audit is a whopping 60%.

Fulton Co. failed to include over 100,000 tally sheets, including more than 50,000 from mail-in ballots, when the results were originally published for the full hand count audit conducted by the office of the Secretary of State for the November 3rd 2020 election. Those tally sheets remained missing until late February when the county supplemented their original audit results.

Petitioners contend that Fulton County did not provide drop box transfer forms for at least three pickup days when obligated to do so via an Open Records Request. Those missing forms are still needed to provide chain of custody proof for about 5,000 ballots.

The VoterGA data team also found over 200 Fulton County mail-in ballot images containing votes not included in the hand count audit results for the November election. All these anomalies are now included in the Fulton County ballot inspection lawsuit as additional counts of how the Equal Protection and Due Process Constitutional rights of Georgia voters were violated.

GA Audit Would Reveal Other Counties Much Like Fulton.

ATLANTA GA – VoterGA announced today it has evidence election result discrepancies in other Georgia counties may be worse than those it presented for Fulton County at a VoterGA press conference Tuesday. The revelation came as VoterGA formalized its call for a truly independent, forensic audit of all county results for the November 3rd, 2020 and January 5th, 2021 elections. VoterGA first announced support for a statewide audit at a July 5th Woodstock Festival and Parade.

On Tuesday, VoterGA explained how a review of newly released public documents led them to amend the Fulton complaint to add counts for these audit discrepancies:

According to VoterGA, a full statewide audit of November, 2020 and January, 2021 election results should validate voter eligibility. It must also include forensic authenticity, security assessments, and accuracy verification involving:

VoterGA further insisted that any such Georgia audit must be conducted by a truly independent team that has no relationship with any Georgia officials who conducted the elections. VoterGA flatly rejected the suggestion by House Speaker David Ralston to engage the Georgia Bureau of Investigation (GBI) stating the GBI:

Another complaint involving the November and January elections, Daugherty v. Raffensperger, is expected to have its first hearing today. [Exhibits]