WATCH: Former US congressman Larry McDonald, explaining the NWO agenda in his last interview before being killed in plane crash… 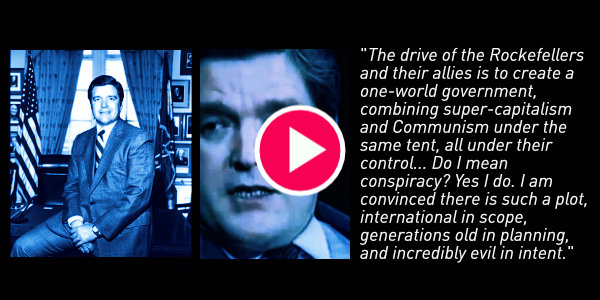 Most people today aren’t familiar with the name Larry McDonald, yet he was a man who could see what direction society and the world was moving, and challenged the elite power structure through his public life.

He was known for his staunch opposition to communism and believed in long standing covert efforts by Trilateral Commission and other powerful US groups to bring about a socialism and world government. He was related to General George S. Patton.

He was also a member of the national council for the John Birch Society since 1966, and in 1983 he became chairman of the organization. It describes itself as “a constitutionalist education-action organization.”

In May 1983, 4 months before he was shot down in Flight KAL 007, Congressman Larry McDonald (D) debated Pat Buchanan and Tom Braden on Crossfire about his new role as Chairman of the John Birch Society. He easily handled them, answering questions concerning the Elite’s Conspiracy for a One World Government.

3 months after this interview U.S. Congressman McDonald died when the airplane he was in was shot down by the Soviets.

Via Hustler Mag 1984:
“While the [U.S.] government has made no such charge, McDonald’s widow claims that her husband, the national chairman of the John Birch Society, was ‘murdered.’ She holds that it was no accident that ‘the leading anti-Communist in the American government’ had been on a plane that was ‘forced into Soviet territory’ and shot down.”