🔴 Live Stream The Great Conjunction of Jupiter and Saturn… 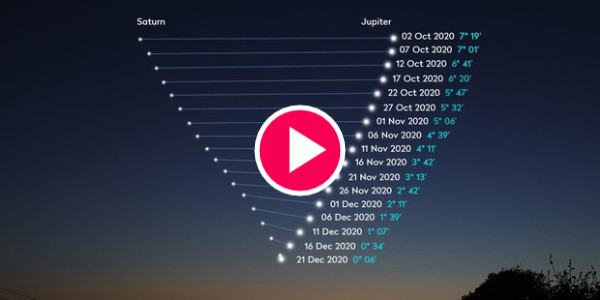 Mirror After drawing visibly closer and closer in the night sky over the past few months, Jupiter and Saturn will appear the closest they have since March 4, 1226, nearly 800 years ago. They were even closer on July 16, 1623, but the pair were too close to the Sun for Renaissance era observers to see them. The Christmas Star is actually a dynamic planetary conjunction that can easily be seen in the evening sky over the next two weeks. Jupiter and Saturn will move closer to one another — which will culminate in an astronomical spectacle on the night of Dec. 21, the winter solstice. Jupiter and Saturn will come so close together in the western sky that they appear as one bright point of light when viewed with the naked eye. Though the planets will appear to overlap, Saturn and Jupiter won’t literally be close to each other, as both are massive planets — each roughly 760-1,300 times the size of Earth — and will still be hundreds of millions of miles apart.

Such an event, dubbed the “Jupiter-Saturn Great Conjunction,” occurs every 20 years. The last time this happened was in 2000, but that event paled in comparison to what is taking place this year since the planets did not appear as close together then.

It also been referred to as the “Star of Bethlehem” due to its brightness, similar to the star that is said to have guided the three wise men to Bethlehem.
Jupiter and Saturn will pass within 6 arc-minutes (0.1 degrees) or about 1/5th the diameter of the full Moon. The conjunction on February 16, 1961, was 14 arc-minutes or about 1/2 the Moon’s diameter. Another sub-degree conjunction will not occur again until March 15, 2080.

How to see it:

Look in the southwest around 6 p.m. They’ll be hard to miss. The pair will be above the horizon until 7:30 p.m. local. As they set, look for them to appear to move further apart a bit due to the Moon illusion.

This is measured in angular separation. The objects are of course physically very distant. Jupiter is nearly 545 million miles away, and Saturn another 456 million miles beyond that.