2020 Election Fraud & The Italian Connection – All Roads Lead To Rome

Imagine this: Data from the 2020 elections were being sent to a US embassy in Italy in real-time, where a State Dept. official – along with agents from the MI6, CIA, and an aerospace defense contractor – took the data, analyzed it, changed it, then resent it back to the U.S. using military satellites owned by that same aerospace contractor – Leonardo. The next thing you know, Biden wins.

Sounds out-there, but there might be truth to this madness. 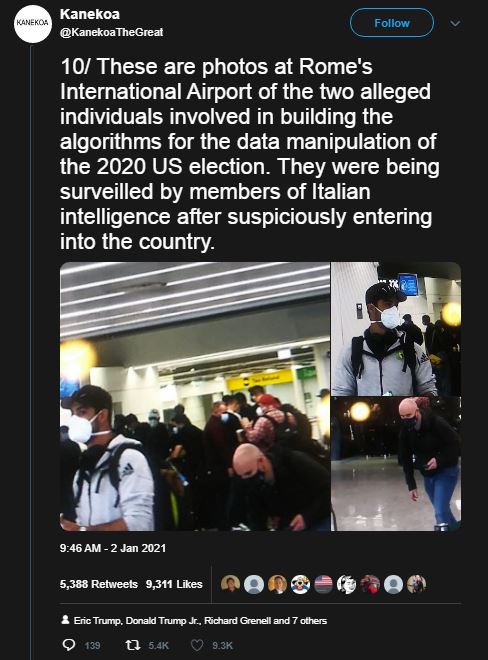 Leonardo is a multinational company based out of Italy that specializes in aerospace, defense and security. It’s the eighth largest defense contractor in the world, and the Italian government is its largest shareholder owning 30% of the company’s shares.

There’s also a U.S. subsidiary of this company called Leonardo DRS, headed by a former Deputy Secretary of Defense under the Obama/Biden administration, William J. Lynn III. According to his bio on Leonardo’s site, he’s also a member of the Boards of the USO, the Atlantic Council, The Marshall Legacy Institute, the National Defense Industrial Association and the Center for a New American Security (CNAS).

A couple of drops shared by entrepreneur Patrick Byrne gave this story some legs to stand on. For instance, check out this piece by Bradley Johnson, a retired Senior Operations Officer with the CIA. He shares his analysis on some of the evidence that Italy’s press uncovered:

Here’s a mirror and a transcript of the notable part just in case the video get’s deleted:

There’s a company called Leonardo… that company is a huge company like SAIC [Leidos] or lockheed martin or somebody like that that does government contracting, you know the industrial complex sort of stuff, but billion dollar contracts with huge things including government satellites – and that’s important because this is something I touched on lightly, but the way that it’s shaping up now, that the us elections were changed, the results were changed in those five or six key states – is that all of those voting machines were hooked up to the internet. The internet then was used to download that information to these famous servers in Germany… a lot of BS rumors about Gina Haspel getting in shootouts and all that. That’s nonsense. None of that happened. Were the servers looked at? Yeah I think those servers were looked at, but no raid… but from there, those were uploaded and sent to Rome – and this is where this took place. Now, what’s being said out of Rome, out of Italy, is that this was done in the u.s embassy. That there was a certain State Department guy whose name I don’t know, yet. I guess this is probably going to come out in Italy at some point – and he was the mastermind, not the mastermind but… the guy running the operation of changing the votes – and that he was doing this in conjunction with some support from MI6, the CIA and this Leonardo group… so these guys are the ones… looking at all the raw data, they’re the ones that said ‘shut down’ all those five states or six states at the exact same time – and the problem was that the algorithms were overloaded that what they had planned on didn’t work because Trump got so many votes… everybody voted for Trump, and so that skewed all of the algorithms. So what they had planned just didn’t work. That’s why everything had to be shut down. So they upload all of this stuff – it gives them time to analyze all of this and create new analogs that then would allow the vote to come out in favor of Biden and once they created all the new data – and manipulated all the data that was there – they sent these new numbers back up through this military satellite – Italian military satellite – run and operated by none other than Leonardo – and this was an encrypted satellite that then went back down through those servers and back down to all the machines here in the United States in those five or six states…

Remember Trump’s 2018 Executive Order against foreign election interference? If Bradley Johnson’s statements are true, Italy – or at the very least – that Italian defense contractor, Leonardo, would be in serious trouble.

Now here’s the thing, remember when Acting Secretary of the DoD, Chris Miller, thanked Mike Pence for taking part in “the most complex military operation in history” during the first birthday of U.S. Space Force on Dec 18? Could the operation referenced by Chris Miller have anything to do with catching Leonardo’s criminal use of Satellites to ‘hack’ the U.S. elections? Keep in mind that Chris Miller assumed office as the acting US Secretary of Defense on November 9th, before that he was Director of the National Counterterrorism Center. Chris Miller took on the role as Acting Secretary of Defense at the same time when other Trump allies took top positions at the Pentagon.

That’s something to think about.

A separate drop from Patrick Byrne is one from a journalist named, Cesare Sacchetti, who used to write for a couple of Italian media outlets, but now has his own site where he writes pieces that have less of a chance of getting censored. In his latest piece titled ‘Italygate: is the Italian government directly involved in the US election fraud against Trump?’, Cesare goes into Italy’s role in Trump’s coup connecting Bradley Johnson’s testimony, with intel from his local region. 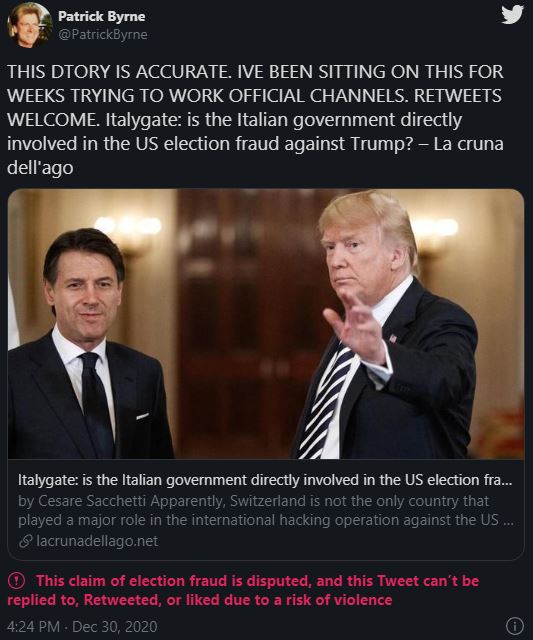 Leonardo CEO, Alessandro Profumo, was appointed in 2017 by the former Italian PM Gentiloni, apparently involved in the Spygate as will be mentioned later, and confirmed in 2020 by Conte’s incumbent government. Mr. Profumo was also recently found guily for committing fraud by an Italian court and he received a six-year jail sentence. Therefore, Conte’s government would have played a decisive role in the hacking operation because it would have allegedly provided Leonardo’s technology to perpetrate a direct attack against the US sovereignity. In this regard, it is important to mention that Conte’s government was among the first international executives which forwarded their congratulations to Joe Biden, when there was no , and there is still not , official confirmation of his alleged victory.

Spygate is the illegal espionage operation conceived against Trump in 2016 and Italy had a major part in it, because the Italian secret services, under the Renzi and Gentiloni administrations, would have aided their US counterpart in an attempt to falsely depict Trump as a “Russian agent”. Therefore, there’s a red thread that ties the first sabotage against Trump and the second one, and this red thread is Italy and its subversive structure infiltrated in the heart of the Italian institutions. In Italy, there’s a cover up on the Spygate because apparently even the so-called “opposition” doesn’t have a particular interest in shedding any light on this case…

Italian journalist, Daniele Capezzone, wrote a piece in one of Italy’s national newspapers called La Verita titled “Trump’s lawyers have no doubts: An Italian hand in pro Biden fraud”, where it talks about the role Leonardo played along with the State Dept official from the U.S. embassy. 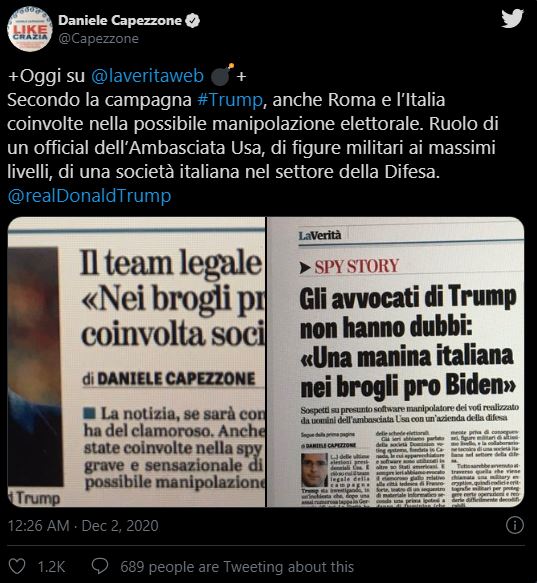 Translated from Google: “Today on @laveritaweb – According to the #Trump campaign, Rome and Italy are also involved in possible electoral manipulation. Role of an official of the US Embassy, of military figures at the highest levels, of an Italian company in the defense sector.”

Here’s the article, but unfortunately it’s behind a paywall.

There’s also audio that’s been making its rounds of a conference call that features certain players discussing intel they received from Italian intelligence. One of the people on the call happens to be Trump’s ex-wife, Marla Maples, who makes some brief statements about her involvement in passing this info to Trump while in Mar-A-Lago during Christmas Eve.

In the beginning of the audio clip below, a couple of names were dropped; Stephan Serafini, a 20-year foreign service officer, and Italian General Claudio Graziano, a board member of Leonardo – both of whom were in cahoots with one another in this election ‘hack’. The call also mentions Obama funneling $400 million through different accounts to fund the unraveling of Trump’s presidency.

Apparently, Trump was given affidavits, documents, audio, and photos of CIA agents involved in the election operation as well.

UPDATE 1: Here’s some more intel from Maria Zack (you heard her in the audio from above) that Arturo D’Elia from Italy admitted to stealing the 2020 elections.


Also General Flynn is pushing to get this story heard: 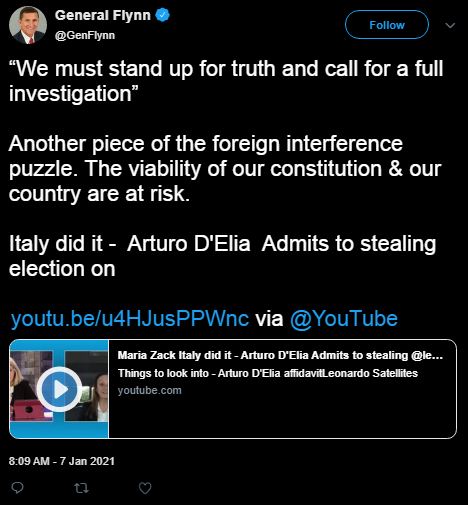 
There are some articles that the MSM reported on related to Leonardo and some “hacking” of sensitive data by two individuals that were recently arrested for it. The question is, was this story used as a cover for the election hack? Here are some articles on that:
https://www.zdnet.com/article/italian-police-arrest-suspects-in-leonardo-military-defense-data-theft/
https://www.reuters.com/article/italy-leonardo-cyber-arrests/italian-police-arrest-two-over-hacking-at-defence-group-leonardo-idUSKBN28F0HX

We will find out soon enough if US authorities will act on this.

All roads lead to Rome