Authored by Patrick Byrne via DeepCapture.com

1) I sincerely regret the emotional trauma some of you experienced when 1/1000th of the January 6 rally turned unruly. That was surely an ethical, tactical, and strategic error of those involved. Please accept my condolences for the fear and trauma any of you experienced on January 6 in the US Capitol at the hands of any in the MAGA movement.

2) While I do not claim to have originated the idea of the January 4-6 rally, I welcomed it, and in the weeks leading up to it repeatedly invited citizens to rally in Washington DC January 4-6 to register objection to an election we saw as rigged. While some were distressed at the putative defeat of a president they loved, the distress of many originated in clear insult to the foundational principle of our republic, that principle being (as our Declaration’s opening phrases it), “just government derives its power from the consent of the governed,” such consent being determined in elections that are free, fair, and transparent (we believe). November 3’s election had been anything but free, fair, and transparent, and millions decided to assemble in DC from January 4-6 to petition our government for redress of grievance.

3) In all interviews before the rally I emphasized that it was to be peaceful, with language such as, “We don’t raise hell. We’re not the violent guys. We’re better than the other guys. Several steps better than the other guys. The other guys are probably going to try to bring violence and intimidation. Let’s show them with love and in peace that we are not going to be intimidated… Only we’re going to do it peaceably. We’re not going to be like the goons… We want to have the moral high ground… We want to be better than the other guys…” [i] In radio and podcast interviews I repeated such exhortations, and on January 5 published an essay drawing attention to the need for those in the rally to ignore or suppress anyone inciting violence, tweeting it to ≈ 300,000 followers, twice.[ii]

4) On the morning of January 6, the results of the January 5 Georgia Senate Run-off appeared. The egregious manipulation artifact that presented that morning[iii] may have caused temperatures to run a bit higher on January 6 than they otherwise might have. 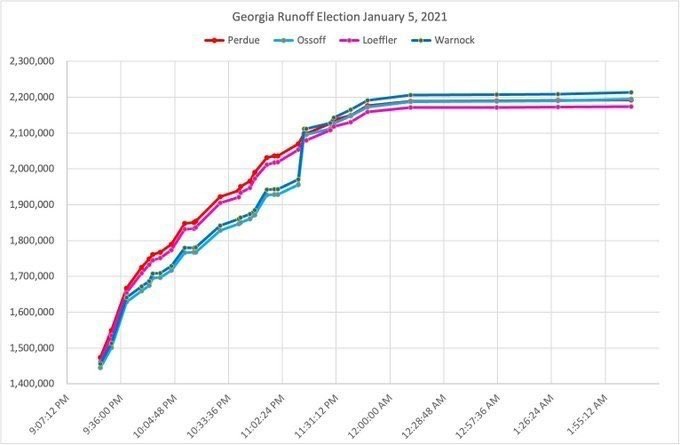 5) Over the last three weeks, the results of investigations into Maricopa’s November 3 election have been announced, revealing massive election fraud vindicating the concerns (though not the unruliness) of those who rallied on January 6.

A) CANVASS – A 4,500-interview door-to-door canvass was disclosed two weeks ago. The canvassing organization asked five benign questions (none of which were any form of, “For whom did you vote?”) They report that citizens welcomed their interviews overwhelmingly, providing robust documentation and asking, What took you so long?

NB Maricopa refused to supply crucial subpoenaed items that would reveal much more:

6) The Attorney General of Arizona, Mark Brnovich, is not so reading-comprehension-challenged as the MSM. We already knew that because of the fine brushback pitch he threw at the United States Department of Justice in June, reminding them about who created whom and where the Constitution assigns discretion to manage elections.[iv]

This Monday AG Brnovich continued to demonstrate his literacy by sending a muscular letter to the Senate requesting the entire production of the Maricopa Audit,[v] and sending a serious-as-a-heart-attack letter to Maricopa County telling them to preserve their records.[vi] Taken together, this means the efforts by RINO Establishment of Arizona to throttle down the Senate report were for naught: it all goes to the AG.[vii]

Everyone goes-for-broke. They lay their cards on the table. A man with a badge, a gun, and an ambition comes through the door.

DeepCapture’s 15 year arc apogees and bursts in the opening of Götterdämmerung.[viii]

7) Since November 10, 2020, I have been calling for the ballot boxes to be opened in six counties (those holding Las Vegas, Phoenix, Milwaukee, Detroit, Philadelphia, and Atlanta), predicting that one would find between 300,000 and 600,000 votes of election fraud in each of them. In only one of the six did investigation come to pass (Maricopa County, Arizona), and the number of fake and suppressed votes comes to 300,000 – 400,000 (per a canvass that was conducted), or 15%-20% of the ballots cast, and similarly, somewhere in the low hundreds of thousands (per a forensic audit).

To any rational person who is open to evidence, this a settled question.

“Of course you’d say that Byrne,” I hear the choagies cry, “With Maricopa you’re batting 1000 and we’re batting .0000!” So out of good sportsmanship I offer double or nothing: choose from the other five cities, Choagies, I’ll organize funding, and we will do it again.

But perhaps the Election Fraud Denial camp might practice a moment of sportsmanship themselves, and realize what their denialism has cost us as a nation. Perhaps it is time they let us move on to the next step. Now that we know the truth of Maricopa, citizens everywhere are reflecting on all the institutions of society that asked them to dismiss these claims as “baseless”: DHS and CISA (“the most secure election in history”), the state courts, the DOJ, the FEC, Mainstream Media, and politicians of all stripes. They were wrong: the Maricopa ballot boxes were at least 15% and perhaps as much as 20% suppressed and stuffed, as an extensive canvass revealed and a Senate-organized audit has corroborated. It was high-tech ballot stuffing and suppression, no doubt, but no different in principle than the Tammany Hall of yesteryear. The presidential race in Arizona was decided by 10,457 votes, of which we now know that over 57,000 were illegal and several hundred thousand may have been fake. If we ignore this, then we should dispense with the whole charade and recognize that we are ushering in an unelected uniparty of elites to preside over a Hunger Games world.

Otherwise, perhaps it is time for the Election Fraud Denial camp to pipe down a bit. Along with all the institutions of society that dismissed, canceled, and threatened tens of millions who saw the truth immediately and fought for it to be revealed.

8) Which brings us back to Congress.

The mystery of what happened at the Capitol on January 6 remains unresolved, and I welcome honest Congressional investigation into its origins. But since Congress is making such a production out of finding that origin, and since that origin is partially with me (in that I publicly echoed calls for peaceful assembly on January 4-6), and since I am also he who helped Arizona citizens nurture the conditions of the Maricopa audit into existence, and arranged the better part of its funding, and this Maricopa audit vindicates the concerns of the January 6 rally-goers, I thought it only right and proper that I offer to meet to address any questions or concerns you may have.

Please be forewarned that I will take these two additional positions:

9) Those who suppressed and stuffed Maricopa ballot boxes 15-20% (thus flipping Arizona’s 11 electoral votes and swinging 22 electoral votes) are the real “Insurrectionists”. They betrayed our Constitution, not the citizens who saw through the scheme that has now been exposed in Arizona (and which I am confident would be exposed in five other states if other audits went forward), saw the import of a hijacked national election, and held a rally, some minute fraction of which grew unruly (from lack of discipline, or from agitation, as honest Congressional inquiry would discover).

10) That horrible fear you experienced on January 6 at the hands of those unruly and misguided protesters (and whatever agents provocateurs existed amongst the crowd and police), that crippling insecurity that traumatized you… you are now visiting on hundreds of millions of other citizens. Because they are afraid. That is because they get the joke: only 31% of Americans will tell a pollster they believe Biden won fair and square, while 69% say that fraud was “Significant”, “Very Significant”, or they are “Unsure”. And that was before this fortnight’s news about Maricopa’s canvassing results and forensic audit.

So over 2/3 of Americans believe they face an administration of dubious legitimacy which, since the day it entered office, has seemed unusually keen to make three changes:

Naturally enough, 69% of the citizenry smells skunk. In addition, the aversion of MSM to treating any of this with a modicum of intellectual honesty has led anyone with an IQ above room temperature to suspect that we are living through an engineered reality.[ix]

So just tell me when, and I’ll come. I don’t need a lawyer. Let’s skip a few steps, and meet.

PS Note a word you have not read: “Trump”. That is because this was never about Donald Trump. He had made clear publicly he was not so keen on me, and I wouldn’t have said I wanted to go on a canoe trip with the man. That said, in our four hours together he was quite gracious towards me, and as I have made clear elsewhere, I liked him more than I expected. All of which has precisely 0 to do with the matter at hand, which is: Maricopa’s election was dirty. Given all the institutional vouching that has been done about it, what reason is there to believe in any election nationwide? Apparently the authorities are capable of being wrong, or tricked…. or are they in on it? Are the people who were behind the Maricopa Mischief taking our country over? That is to say, is this a coup?

PPS In September, 2006 (15 years ago this month), seven US senators from both parties had me come alone to Washington, DC so they could make an unusual request of me. In support of their request they showed me a letter and promised me that it would be available unconditionally years down the road when I needed it, on a “no-take-backs” basis. On that point, seven US Senators shook my hand and gave me their word as gentlemen. Six of those men are still alive and three are still Senators (still from both parties and even more prominent than before). Naturally I am not requesting they endorse or even comment on my recent activities, but now, 15 years after they made it, I am triggering their “no-take-back” promise: I respectfully request those three remaining Senators’ make that letter public. Doing so now would only be… Gentlemanly.

Patrick Byrne: There are traitors in the White House

For numerous more examples of my statements about peace, see those gathered here:

[iii] The Georgia run-off resembled and amplified a key artifact from November 3, 2020: 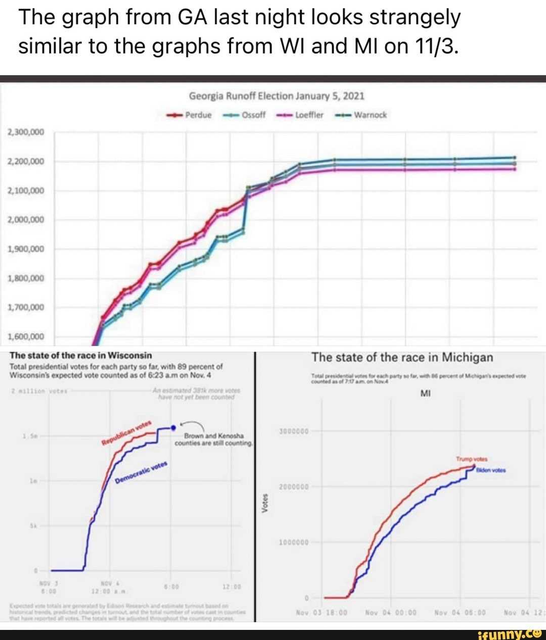 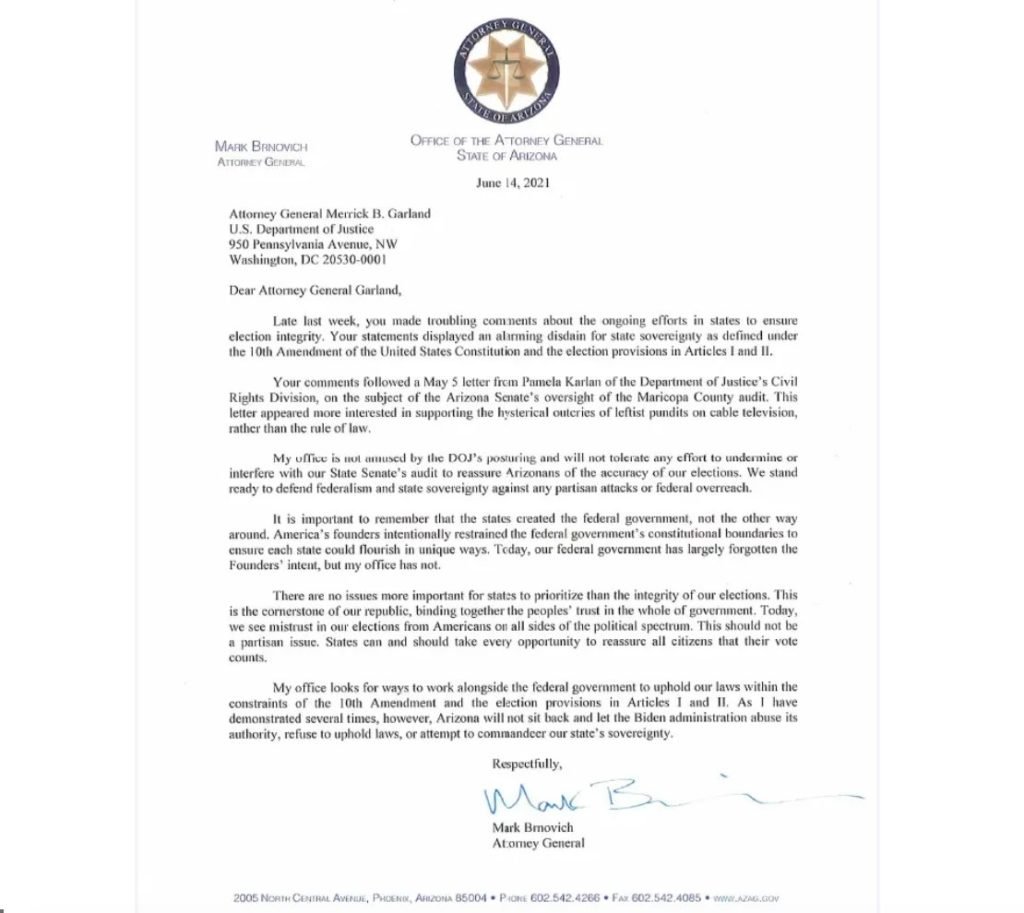 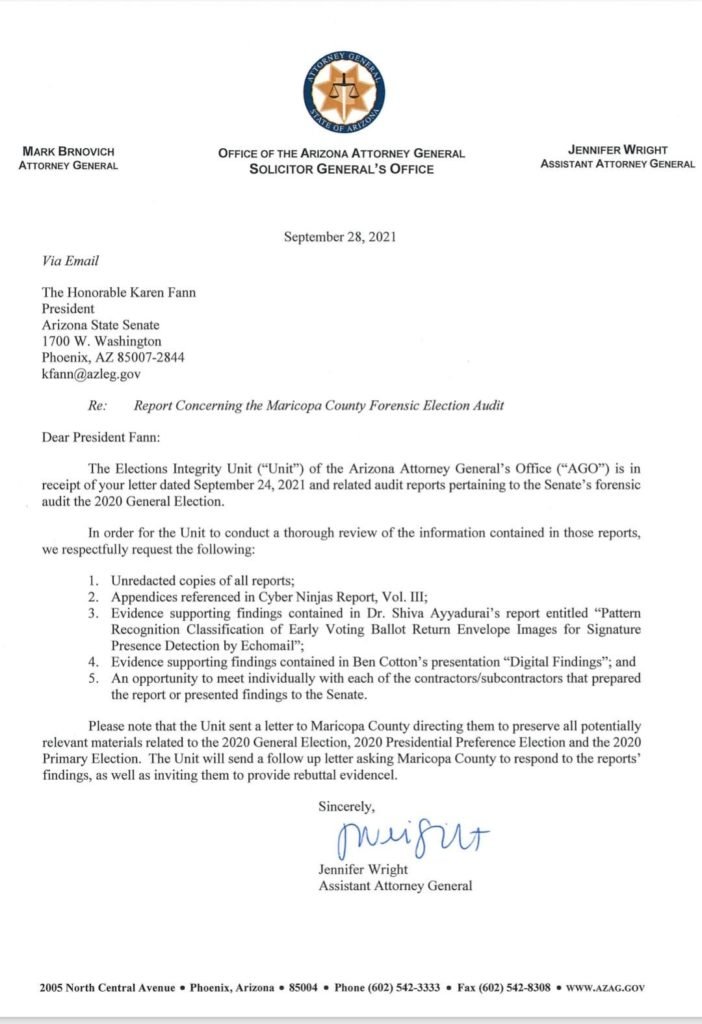 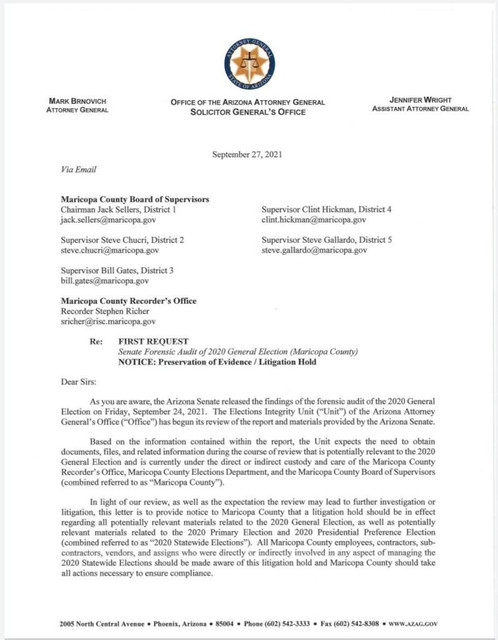 [vii] As a side narrative: once all the truth is out, and voters find out how RINO politicians cooperated with Democrats to throttle-down the Arizona Senate report, it is going to be another scandal in its own right. On RINOs.

[viii] NEWSFLASH: Anyone in Arizona who has been involved with these shenanigans and who has any sense is buying a burner phone, calling the Arizona AG’s office at 602-542-4266, and saying, “I was involved with the rigging of the Arizona election. I want to meet someone as soon as possible, even today. I may be under surveillance and would like to meet in a motel. I won’t bring a lawyer.” Prosecutors aren’t in the forgiveness business, but they can do mercy. As far as I can tell, there may have been as many as 200 people who played a role in the Maricopa Mischief: if even 1 of them goes in and talks, the whole thing will unravel, eventually reach you, and you will go down for hard time. So if you stay silent now, you are betting that not 1 in 200 people will squeal.

Good luck with that one, too.