The left has come up with what they think is a genius way to ‘get Trump’ for not condemning White supremacists even though he has multiple times. With this recent arrest of an alleged ‘Proud Boy’ member, the MSM has been hand-delivered the narrative they asked for. Coincidence?

During the debate Chris Wallace asked Trump condemn White supremacists once again, but then Biden intrudes the conversation and calls for Trump to condemn the Proud Boys. It’s not clear if Trump knew of the Proud Boys or not, but it didn’t take long for the DEMs and Fake News to find a patsy to arrest and blame the Proud Boys in order to create a political hit job to target Trump. The problem is, the internet never forgets and facts will prove that this man whom was arrested, Alan Swinney, is not and has never been a member of the Proud Boys organization.

NOTE: Twitter seems to have deleted Alan Swinney’s accounts, but not before we archived a few of his tweets.

A supporter of the right-wing Proud Boys group who was indicted for pointing a firearm and firing a paintball gun at anti-racism protesters in Portland, Oregon, was arrested early on Wednesday, according to a county prosecutor.

The arrest of Alan Swinney, 50, came hours after U.S. President Donald Trump in Tuesday’s presidential debate told the Proud Boys to “stand back and standby” when asked if “white supremacists and militia groups” should stand down after confrontations with anti-racism protesters in U.S. cities.

This also happens to be this first time that Portland Mayor Wheeler has brought up any arrest from the past 100+ days of Antifa riots in Portland:

This is the only arrest in Portland that @tedwheeler has brought attention to this year. And according to the Proud Boys, Swinney is not and has never been a member. pic.twitter.com/9aOFTrI231

Alan is also the only ‘protester’ who has been arrested and not released on bail:

The Proud Boys have come out and denounced Alan Swinney multiple times – even as way back as 2019. Here are a few examples: 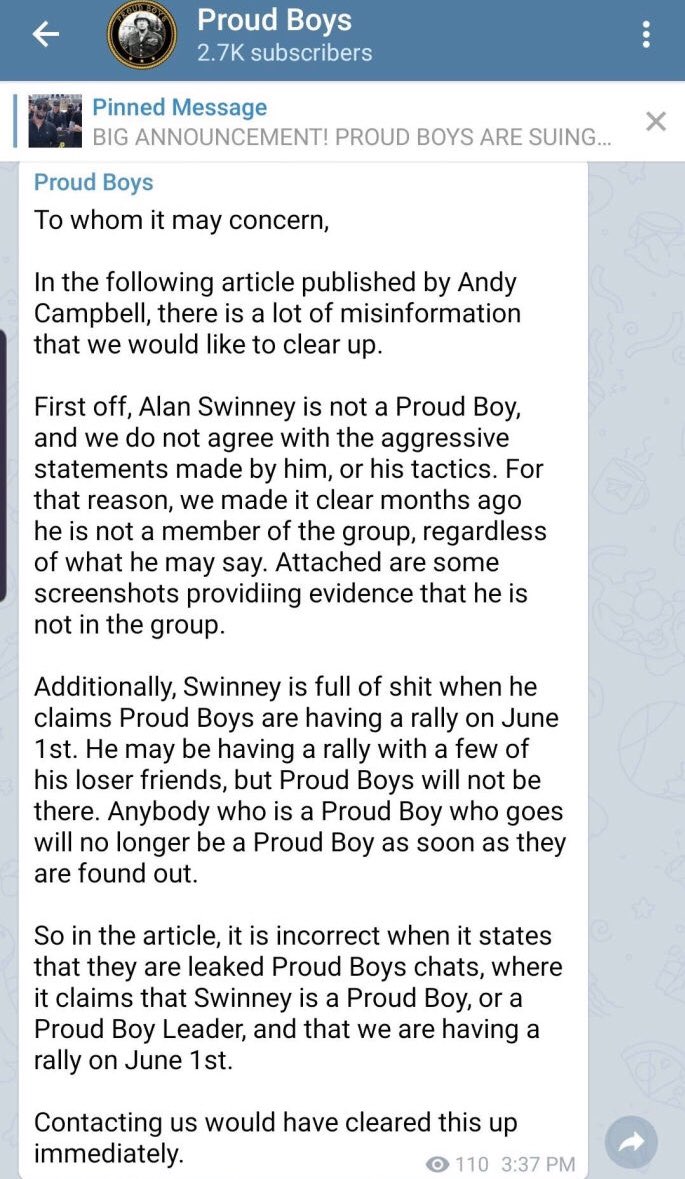 Now in Alan’s mind, he thinks he is a Proud Boy, but that doesn’t mean he is a member or is endorsed by the organization. Read his replies carefully: Lol. Enrique didnt write this. Fyi… Enrique has no say in who or who isn't a proud boy. Each PB chapter is autonomous. I'm the president of my own nomad chapter. Nice try tho. Hey tara. If you blow real hard on your thumb, maybe a penis will pop out and you can be a real proud boy and not just a groupie. It's worth a shot. FYI. no one needs Enriques permission to be a proud boy. Antifa could start a chapter if they wanted to. You will NEVER be one tho. The funniest thing about all of this is that you guys think you decide who is and isn't a proud boy. I didnt put you or Enrique in charge of anything. Enrique's position didnt exist when I joined. I didnt approve that position. Fuck what y'all think. You dont control my chapter.

The left on twitter is claiming that because Alan has a tattoo with the letters ‘Proud Boy’ means that he is one. But that proves absolutely nothing:

Here’s Proud Boys leader Enrique Tarrio talking about being mentioned in the debate and responding to reports that they are a White Supremacists organization:

Finally, does the arrest of Alan Swinney look normal to you?

Think about how the left and their media puppets have managed to create absolute panic about White supremacy days before the election, when Antifa, BLM, and other anarchists have spent months destroying the country. There is a war on for your mind and these weasels will twist and turn the narrative anyway they can to gain control.