Steve Bannon associate and Exiled-CCP Billionaire, Miles Guo, has dropped some new intel claiming President Trump and the DOJ are now in possession of three “nuclear weapon hard drives” with damning evidence that will put an end to the Chinese Communist Party’s reign and their puppets; the Biden Crime Family.

The Lutheran News Agency are the ones that originally gave Miles Guo the details of their analysis of the hard drives. The three hard drives were submitted by the Jiang Zengmeng family after having a fallout with Xi Jinping. The motivation behind the distribution of the hard drives was due to Xi Jinping’s support of Biden and Xi’s plan to plunder overseas assets of several prominent Chinese families. That’s when panic hit and their plan went into motion.

Xi Jinping’s actions to discredit President Trump in order to support Biden’s ascendancy caused the Jiang Zengmeng family to panic. They feared that Biden would cooperate with Xi to plunder the overseas assets of several major families after he was elected president. At the same time, he was also afraid that Xi would kill him after he completed the plunder.. the Jiang Zengmeng family was forced to make a move and handed three “nuclear bomb hard drives” to the US Department of Justice. After many setbacks, they were sent to President Trump by their revolutionary comrades.

The three hard drives supposedly contain information that would – according to the Lutheran News Agency – change world history. The hard drives are said to contain the following:

As for the CCP and biological weapons, Guo also mentions that in a separate analysis of the third “Nuclear Bomb Hard Disk”, there is video documentary evidence where Xi Jingping mentions “… new military-civilian integration plan in the internal meeting, with gene editing, biological attack and defense, and vaccine development as priority plans.”

The Revolutionary Lutheran News Agency also pointed out the following:

… the third “Nuclear Bomb Hard Drive” included evidence from WHO Director-General Tedros Adhanom Ghebreyesus, Maria and others. During the epidemic, the WHO cooperated with the CCP to declare that the virus will not spread from person to person, and will not be transmitted asymptomatic. People and viruses will not cause erroneous information such as international spread, and cause major global casualties.

Furthermore, gnews.org goes on to say that “President Trump’s holding of the “nuclear bomb hard drive” also means that the CCP is about to withdraw from the stage of history”… “It is about to face the people of the world. Trial.”

Please note: We can’t find much info on the name “Jiang Zengmeng”, but our suspicion is that there might be a translation error, and instead, Guo could be referring to Jiang Zemin. Of course we’ll do our own digs but expect others to do the same. ***Update*** According to a commenter below, “Jiang zengmeng means Jiang/Zeng/Meng，three Jiang faction name: Jiang zemin, Zeng qinghong and Meng Jianzhu.” All who were high level members of the CCP. This is also confirmed in the video below.

There is also this video that goes into details of what these hard drives contained.

Sept.24th Lude’s broadcast: 3 hard drives.Jiang Zemin, Zeng Qinghong, Meng Jianzhu made the move – provided 3 hard drives to the DOJ of America, and another copy to Nancy Pelosi. However, with the help from our fellow fighter, these hard drives reached the hands of President Trump.The 1st hard drive: sex tapes & pedo tapes of Hunter Biden, as well as his 4.5 billion dollars secret deal with Xi & Wang;The 2nd hard drive: the allocation of Xi & Wang’s overseas wealth, and ‘the architecture & art project’, which is the information of their illegitimate children;The 3rd hard drive: CCP’s bioweapon

Rudy mentioned Ye Jianming in a Daily Caller interview that was released today. This isn’t the same guy/family as above but it is interesting to note.
Rudy said:

“One of the situations with the members of the communist party that [Hunter] was in business with was revealed. It showed that they were negotiation a deal to put together a company called ‘Hudson’, and the company was made up of, um, Ye Jianming, who was a high level member of the communist party and an intelligence operative. Now kind of living at the bottom of an icy river, because he has been killed.”

The plot thickens. As for the stories of the computer repair man and Hunter Biden’s laptop, it seems there were actually three laptops according to the receipts that were featured on the NY POST. See below: If you’re thinking that these might be the same hard drives, consider this; the date the laptops were submitted to the computer repair guy, don’t really add up to the contents of what Miles Guo says are on the three “nuclear bomb hard drives”. For instance, the evidence from the WHO and the pandemic would have only occurred in late 2019, meanwhile the laptops were submitted on April of 2019. So it isn’t likely that they are the same hard drives, but contents that the Chinese had on hand could very well be some of the same content that are on the laptops.

The Daily Mail and the Daily Beast are both prematurely tying the hard drives to the laptops saying they are the same thing, without considering the above.

Then of course there is this trippy photo of Rudy Giuliani, Lude (the man in the video above), Steve Bannon, and Dr. Li-Meng Yan (Chinese/Hong Kong Virologist coronavirus whistleblower): 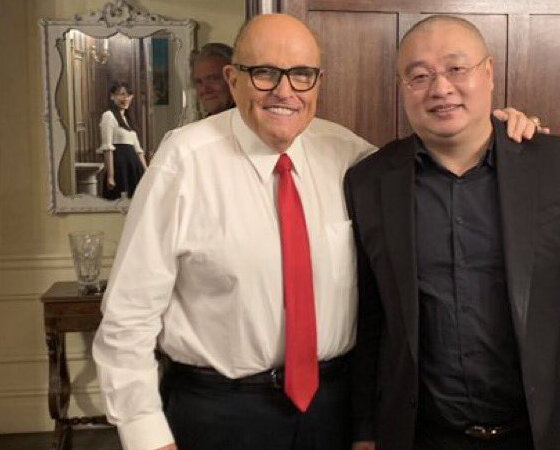