TRUMP TRAP: Watermarks, Voter Fraud, and Foreign Interference – Is China and Others successfully manufacturing ballots and coordinating with leaders of battleground states to rig the election for Joe Biden?

Could “China Joe” be colluding with the CCP and other foreign entities to rig the 2020 Presidential elections? What is on Hunter’s laptops? What is on the 3 “nuclear hard drives” submitted by Miles Guo to the DOJ and Trump via CCP dissenters? Pompeo warned governors of CCP infiltrations of U.S. infrastructure. What is the executive order Trump signed in regards to Foreign Election interference? Where there watermarks on the ballots? What is CISA? It seems Trump has been preparing for this moment for a long time.

On September 12, 2018, Trump signed an executive order titled Imposing Certain Sanctions in the Event of Foreign Interference in a United States Election. This applies to any entity, individual, or even a government. It basically gives a 45-day period during which the Director of National Intelligence John Ratcliffe will make an assessment and turn its findings over to the DHS, DOJ, and other heads of agencies. Once they are in full agreement that there was interference, the next step would be to impose sanctions. The sanctions would most likely come in the form of asset blocking. But the executive order also states that the Department of State and Treasury will make punishments based on the “seriousness of interference.”

The following is only a small section of the executive order. Read the rest at WhiteHouse.Gov:

Section 1. (a) Not later than 45 days after the conclusion of a United States election, the Director of National Intelligence, in consultation with the heads of any other appropriate executive departments and agencies (agencies), shall conduct an assessment of any information indicating that a foreign government, or any person acting as an agent of or on behalf of a foreign government, has acted with the intent or purpose of interfering in that election. The assessment shall identify, to the maximum extent ascertainable, the nature of any foreign interference and any methods employed to execute it, the persons involved, and the foreign government or governments that authorized, directed, sponsored, or supported it. The Director of National Intelligence shall deliver this assessment and appropriate supporting information to the President, the Secretary of State, the Secretary of the Treasury, the Secretary of Defense, the Attorney General, and the Secretary of Homeland Security.

(i) the extent to which any foreign interference that targeted election infrastructure materially affected the security or integrity of that infrastructure, the tabulation of votes, or the timely transmission of election results; and

(ii) if any foreign interference involved activities targeting the infrastructure of, or pertaining to, a political organization, campaign, or candidate, the extent to which such activities materially affected the security or integrity of that infrastructure, including by unauthorized access to, disclosure or threatened disclosure of, or alteration or falsification of, information or data.

By the way, this executive order goes hand-in-hand with a new agency Trump created called the Cybersecurity and Infrastructure Security Agency (CISA) – which falls under the DHS. This agency was created in November of 2018, almost one month after the executive order above was signed. They are tasked with protecting the nation’s physical and cyber critical infrastructure.

CISA subcomponents include the:

Now, remember when Pompeo spoke at the National Governors Association to discuss China? One of the things he said was “China‘s Communist Party has infiltrated various levels of America’s infrastructure and is working to destroy the values of the United States,” […] “It’s happening in your state”. He basically put the governors on notice.

RIGGED 2020 ELECTION: MILLIONS OF MAIL-IN BALLOTS WILL BE PRINTED BY FOREIGN COUNTRIES, AND OTHERS. IT WILL BE THE SCANDAL OF OUR TIMES!

Last but not least, watermarks on 2020 ballots?

Then we have this straight from CISA (bottom of page 10): 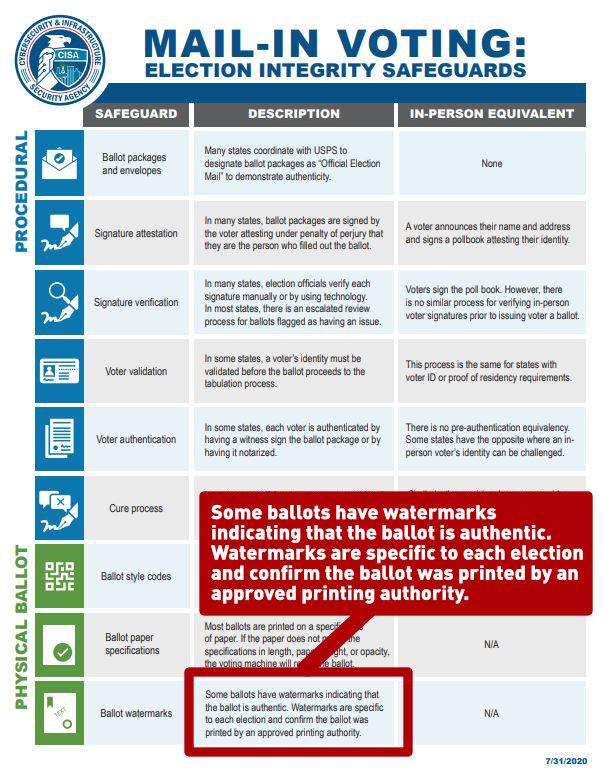 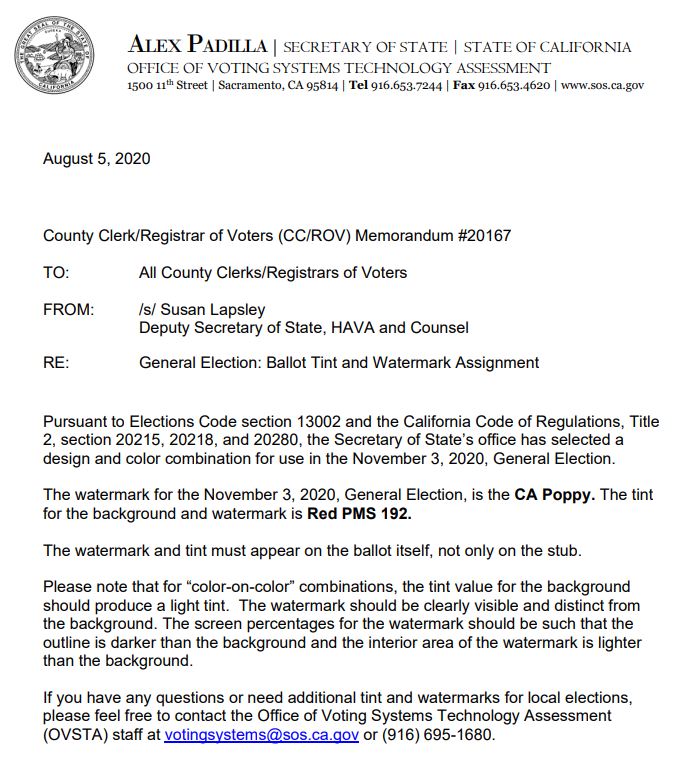 Are watermarks secure? It all depends. The Party that cheats can just use the manufacturers assigned with the printing to just print more ballots, they they can send mail-in ballots to everyone in the state, and surprise, some of those ballots don’t arrive at the target location. Surprise, you voted Biden!

This is only speculation and leans on wishful thinking, but, it really does feel like something big is about to drop between now and January 3rd 2021.