Not one or two, but three lightning strikes hit Trump tower after the Wall Street Journal said two strikes were needed for Trump to win the 2020 elections. You can’t make this up.

You can thank Jason L. Riley for writing such a title and piece on the Wall Street Journal, which went something like this: 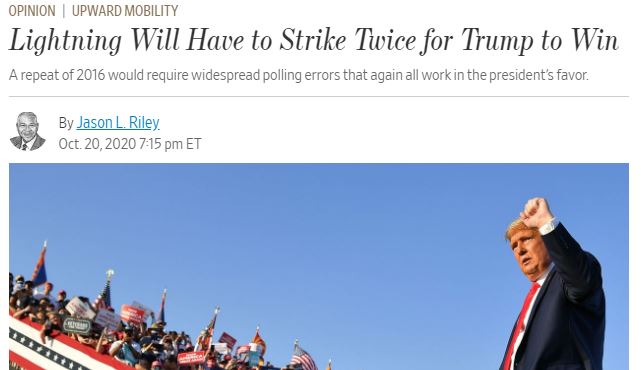 Lightning Will Have to Strike Twice for Trump to Win. A repeat of 2016 would require widespread polling errors that again all work in the president’s favor.
[…] Mr. Trump is surely taking comfort in this history, and many Republicans expect this year to be a repeat of 2016, when surveys underestimated Mr. Trump’s support in swing states that he ultimately carried. But placing your faith in the inaccuracy of the polls is risky for at least two reasons. First, polling for the 2018 midterm elections, as well as for off-year gubernatorial races and special elections, has been largely accurate. Second, a repeat of 2016 would require not only widespread polling errors but errors that once again all work in Mr. Trump’s favor, which is certainly possible but not very likely.

You can’t make this up…