“We are at war – a war that is not openly declared”: Archbishop Vigano Calls Out The New World Order in An In-depth Interview… 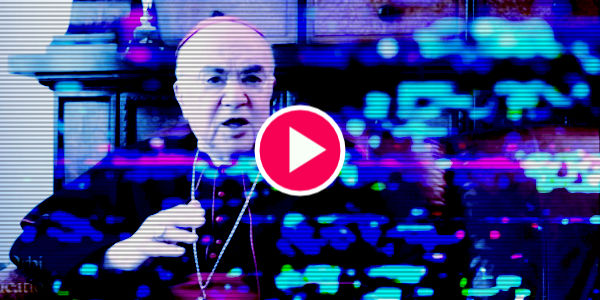 Some highlights from the interview:

Archbishop Vigano: “It is obvious that rulers are not pursuing the common good when they expose a population to experimentation without scientific basis, even in the face of evidence of the vaccine’s ineffectiveness and the damage it causes to those who have received it. And it is equally obvious that the ecclesiastical Hierarchy, insofar as it lends itself to supporting this massacre planned on a global level, is an accomplice to a crime against humanity and even more to very grave sin against God. The Bergoglian Sanhedrin is clearly integral to the plan of the Great Reset: on the one hand because it is pursuing ends that have nothing to do with the purpose of the Catholic Church, and on the other because it hopes that its complicity can bring it some sort of political and economic advantage in view of the new order.

In no way can we accept the administration of experimental gene serums, in the course of whose production children have been killed in the third month of pregnancy: their blood would fall on those who produce them, as well as on those who impose them, and those who receive them. In no case should it be tolerated that a pseudo-pandemic, whose victims are fewer in number than the victims of the supposed vaccines, become an alibi for imposing controls and limitations on natural freedoms and civil rights. And if the media, enslaved to power and accomplices of this conspiracy, censor every dissenting voice, this should persuade us that the dystopian society described by Orwell is now being realized following a precise script, under a single direction.

Let’s not forget that since 2010 the Rockefeller Foundation has predicted four scenarios for these years, one of which was the pandemic “lockstep.” Roadmaps have been studied for all of these scenarios, and it is disturbing to see how the one relating to the pandemic has essentially turned out as expected (see Scenarios for the Future of Technology and International Development, here). The thousands of fires started around the world in recent days are providing the mainstream media with the pretext to shout about the climate emergency, in the name of which they are already warning us that we will have to prepare for new lockdowns and new forms of limitation of our freedoms and our rights. But then there will be the global cyber-attack or the economic crisis, which have already been studied and planned out, and whose first signs we can observe. All of these strategies have the attack on the individual as their objective – isolated and attacked in his emotionality, in his daily rhythms, in his work – and also attack the masses in an undifferentiated and anonymous way.

Those who dissent, that is, those who do not accept being turned into guinea pigs and seeing the world population decimated by transforming it into a mass of chronically ill, must understand that disobedience is just as necessary as it was at the time of other dictatorships of the last century, and even more so.”