“My office is not amused by the DOJ’s posturing”: Arizona AG, Mark Brnovich, Responds To Biden Regime’s Threats of Interfering With State Audit… 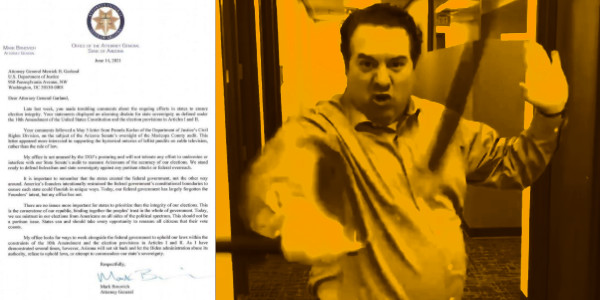 Arizona’s Nunchuck-wielding AG just put his foot down and told the Biden regime that he won’t allow them to abuse their authority and “attempt to commandeer” Arizona’s sovereignty.

The letter reads as follows:

Late last week, you made troubling comments about the ongoing efforts in states to ensure election integrity. Your statements displayed an alarming disdain for state sovereignty as defined under the 10th Amendment of the United States Constitution and the election provisions in Articles I and 11.

Your comments followed a May 5 letter from Pamela Karlan of the Department of Justice’s Civil Rights Division, on the subject of the Arizona Senate’s oversight of the Maricopa County audit. This letter appeared more interested in supporting the hysterical outcries of leftist pundits on cable television,
rather than the rule of law.

My office is not amused by the DOJ’s posturing and will not tolerate any effort to undermine or interfere with our State Senate’s audit to reassure Arizonans of the accuracy of our elections. We stand ready to defend federalism and state sovereignty against any partisan attacks or federal overreach. It is important to remember that the states created the federal government, not the other way around. America’s founders intentionally restrained the federal government’s constitutional boundaries to ensure each state could flourish in unique ways. Today, our federal government has largely forgotten the Founders’ intent, but my office has not.

There are no issues more important for states to prioritize than the integrity of our elections. This is the cornerstone of our republic, binding together the peoples’ trust in the whole of government. Today, we see mistrust in our elections from Americans on all sides of the political spectrum. This should not be a partisan issue. States can and should take every opportunity to reassure all citizens that their vote counts.

My office looks for ways to work alongside the federal government to uphold our laws within the constraints of the 10th Amendment and the election provisions in Articles I and II. As I have demonstrated several times, however, Arizona will not sit back and let the Biden administration abuse its authority, refuse to uphold laws, or attempt to commandeer our state’s sovereignty.

We stand ready to defend federalism and state sovereignty against any partisan attacks or federal overreach. https://t.co/FPx96b8Cg1

Clearly, my years of martial arts training paid off. Pulled my old nunchaku out of storage…like riding a bike. #WayOfTheDragon pic.twitter.com/ibVf9ADWmx