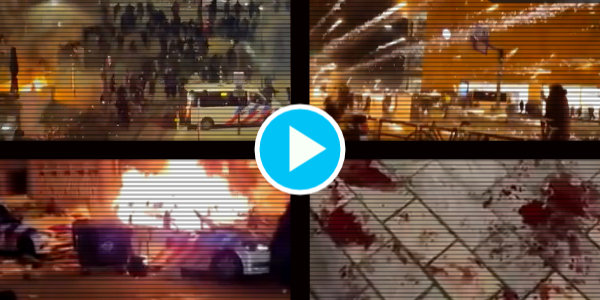 How is any of this about keeping us safe? Rotterdam now

We’re not going to allow the suffocation of our freedoms. We stand with Austrians, Dutch, Australians Canadians & friends worldwide

BREAKING: tensions boil over in Rotterdam as people rise up against covid restrictions and legislation. pic.twitter.com/NQvRw64Yuo

The Scenes we have witnessed tonight in Rotterdam is coming to a city near you, very soon 🤔
When a Government takes peoples Freedoms from them and then makes a Experimental Injection Compulsory, that we all know is no fucking good for us and will do us harm, this is what you get pic.twitter.com/XwoiWbsyt1

#Rotterdam #Netherlands Last night police fired at their citizens who took to the streets against #lockdown mandates.. Unconfirmed reports of injuries pic.twitter.com/dBziPzAoir

This was Rotterdam last night.

Soon to be shown on Tucker Carlson as Portland. pic.twitter.com/NXIYo9EcG6

🇳🇱 This how it started #Rotterdam pic.twitter.com/Yfh6o94jwB

Protests turned violent in the Netherlands as crowds in Rotterdam marched against government plans to make a 'coronavirus pass' mandatory for some indoor venues https://t.co/zqTADgZZiW pic.twitter.com/N3haRtyRJQ

This is what you get when trying to rule by tyranny. We will see this all over the world. They have to be prepared to defend their position. Some inocent cops gonna get hurt but they try to depopulate the planet and kill our children. Either you with them or with us. #Rotterdam pic.twitter.com/8AV88r80OE

There has never been global unrest on this scale.

Tonight it is Rotterdam's turn, tomorrow somewhere else, people have had enough.

🚨CHAOS🚨 now erupting on the streets of Rotterdam with reports of gunshots being fired and multiple casualties. As yet this is unconfirmed. pic.twitter.com/jmi5JsEeNw

#Rotterdam has become the epicenter of the pushback against medical aparteheid. pic.twitter.com/46Y1Bb6aYs

The police in #Rotterdam started shooting people in the streets (original footage) pic.twitter.com/QNnkOoOva8

Kick for the police in Rotterdam pic.twitter.com/NedcPOUawG

Violence in the streets of Rotterdam. Boiling point reached. Unconfirmed reports of shots fired and fatalities.

This is the trajectory we are on. Sadly, it’s only a matter of time before the blood flows.

It’s death by a thousand cuts.

#Netherlands
Protesters bleed after being shot by police in Rotterdam on Friday evening. pic.twitter.com/sTosRVqvpH

If This was NOT the Rotterdam dutch police? Then This must’ve been agents of the EU special military force “THE EUROGENDFORCE” If So? what tha fuck were they doing in #Rotterdam??? #VaccineMandate #2Gprotest https://t.co/9BVWQoRSjW pic.twitter.com/1CjtSJn2lh

Having lived in Holland for almost 2 years during the noughties, the #Rotterdam uprising reminds me of what I was told the day I moved there:

So the Dutch government only has itself to blame.