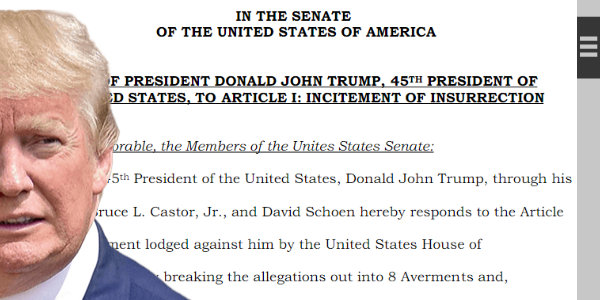 “Incitement of Insurrection against him as moot, and thus in violation of the Constitution, because the Senate lacks jurisdiction to remove from office a man who does not hold office…”

Trump’s lawyers also added: “It is admitted that after the November election, the 45th President exercised his First Amendment right under the Constitution to express his belief that the election results were suspect, since with very few exceptions, under the convenient guise of Covid-19 pandemic “safeguards” states election laws and procedures were changed by local politicians or judges without the necessary approvals from state legislatures. Insufficient evidence exists upon which a reasonable jurist could conclude that the 45th President’s statements were accurate or not, and he therefore denies they were false“ which leaves room for Trump to argue election fraud.

Arguments from Trump's legal team on impeachment (h/t @weijia):
-Trump cannot be tried for impeachment because he is no longer president
-Trump did not engage in insurrection or rebellion
-As a private citizen, the Senate has no jurisdiction over whether he can hold office again