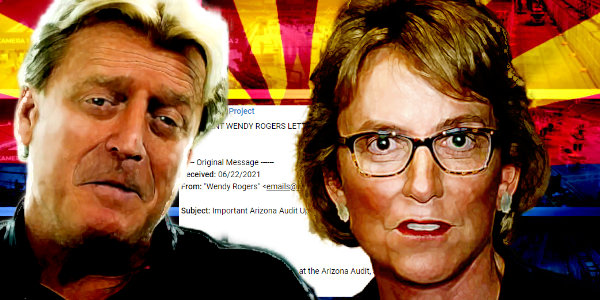 I walked the floor for three hours at the Arizona Audit, and I have some things to say.

First, let me say that the media wouldn’t know the truth if they were hit over the head with it. The scope of their misreporting has been borderline legally actionable.

Second, Katie Hobbs is an inveterate liar whose incompetence and fraud are being revealed through this audit.

Third, anyone who still trusts the Dominion voting machines at this point, either wants fraud or is too lazy to hand count the ballots.

I am Senator Wendy Rogers, the Arizona State Senator who was a pivotal vote for the audit. I have been to the audit and I wanted to share the REAL scoop with you.

Here are some of my takeaways from the tour of the audit yesterday:

There has been an increase in capacity now:

The pace is picking up daily, with more audit forensics done each day. This process will be done soon!

Theoretically, mail-in ballots should all be of the same type, composition, and fiber with little to no variance. So if variances ARE seen, there should be an explanation; if there is no explanation, then that is a gap.

These are issues we can address with additional future legislation.

703 precincts were condensed down to 175 precincts. Every precinct has different ballots. Thus, if your ballot was “printed on demand”, then the paper in those situations could legitimately vary… but the paper should not vary for mail-in ballots.

We now DO finally have the deleted databases folder that was missing for some time.

Let’s say a ballot box’s pink slip says there are 200 ballots contained in the box. Really, only 99 physical ballots are actually IN the box (yes this is happening a LOT).

There should be TWO cross-references to verify this. The Dominion machine would have a batch number corresponding to that grouping of ballots AND Dominion should have the scanned imagery to similarly correlate to those ballots. Where are the remaining 101 ballots? Are they imaged in Dominion? Is their batch number tallied in Dominion? That’s why we need the databases.

Noteworthy that both Dominion and Secretary Hobbs have declined the invitation to observe the audit, however everything is still being video recorded.

Now, will the AZ Audit be enough?

Yes, because it will inform legislation necessary to plug the gaps to restore the public’s confidence. That is the reason the Arizona Senate is doing this, so we know the loopholes and can close them.

There was a helpful debrief from the Cyber Ninjas CEO. Here are the highlights:

I was also able to speak with a floor volunteer who is a retired USAF pilot. Here’s what he had to say:

Here are the procedures on the floor:

As you can see, and I could verify with my own two eyes, this audit is being carried out with the greatest of care and by true professionals who know what they are doing and care about our democratic processes.

The transparency here has been remarkable. Every citizen can visit the video feed and witness what’s going on.

The best practices being developed here can be used for future audits, such as those being considered in Wisconsin, Pennsylvania, Georgia, and other states.

We knew there was something wrong with the 2020 election at the beginning of this process. Already we are troubled by several issues and discrepancies that need to be sorted out.

I’m so glad we did this audit! But it only happened because I won my seat in a swing district!

I’m thrilled to see movements for audits in Wisconsin, Pennsylvania, Georgia, and other places. They can use the procedures we developed for the Arizona audit!

The machines are a problem. The procedures were faulty. We clearly have work ahead of us to guarantee election integrity in Arizona.

I am bringing you updates because we know the worthless media will not. I want you to know the truth- the media only wants to shill for the leftist Democrats.

Help me keep my seat so we can see this process through, together!

Thank you and God bless you.