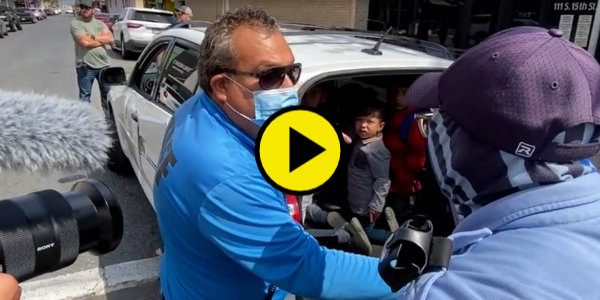 Alex Jones was at the border documenting the migrant crisis and witnessed a man stuffing the back of his vehicle with young kids. That’s when Jones decided to spring into action.

Alex Jones and the Infowars crew had been tracking the human smuggling operations of the Biden administration. Buses were recorded taking children from the dirt floor child camp under the International Bridge in McAllen to a processing camp in Donna TX. Then moved to a COVID processing center in downtown McAllen from there, they are processed at a Christian Charity, where they are given bus or airplane tickets and moved to the airport or bus station. When the crew was walking to the Christian Charity center near the bus station, they witnessed five children and an adult exiting the center and being loaded in a hatch back car. Three of these children were loaded into the luggage compartment where no seat belts were present. This video picks up where the crew sprung into action.