Authored by Chris Menahan via InformationLiberation

President Joe Biden dropped to his knees during a meeting with Israeli President Reuven Rivlin last Monday at the White House.

President Rivlin and his chief of staff Rivka Ravitz could be seen laughing at Biden during the humiliating display.

“Finally, something that truly meets the definition of the sanctification of God,” Yossi Elituv of Michpacha tweeted (as translated by Google). “President Biden kneels in honor of the ultra-Orthodox Rebecca Ravitz, who combines two important careers: a mother of 12 children, and the head of the outgoing staff at the President’s House. Ravitz will continue to sail far.”

The Israeli paper Kipa.co claimed on Friday that Biden “knelt in honor” after being told that Ravitz has had “no less than 12 children.”

“The two presidents talked at length about the commitment to strengthen relations between the two countries,” Kipa reported.

“My commitment to Israel is known and engraved in the rock,” Biden said as reported by Kipa and translated by Google. “Includes an unquestionable commitment to Israel’s self-defense. I can say that Iran will never receive nuclear weapons on my watch.”

In 2015, Rivkah was praised by Orthodox Jewish papers after she refused to bow to the Pope because “she was halachically forbidden to bow to him because of the cross” and refused to shake his hand “because she is observant of halakha (Jewish law),” according to Israel National News.

The Pope reportedly responded by covering his cross with his hand and bowing to her. 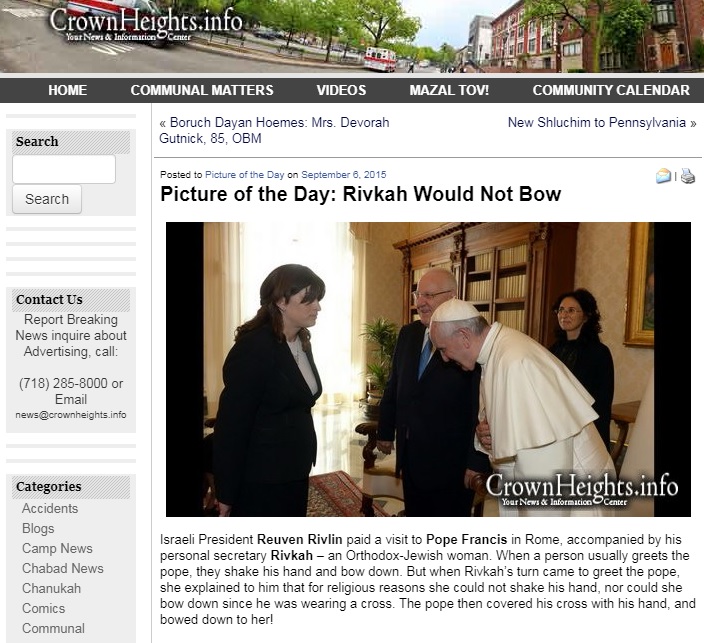 Rivlin’s office did damage control by having an anonymous source claim Rivkah did bow to the Pope before the picture was taken.

I don’t know but I do know our president should not be kneeling before anyone but God!

Conservatives were quick to criticize Obama during his presidency for bowing before foreign leaders yet for some reason they’ve got nothing to say about this far more humiliating display!