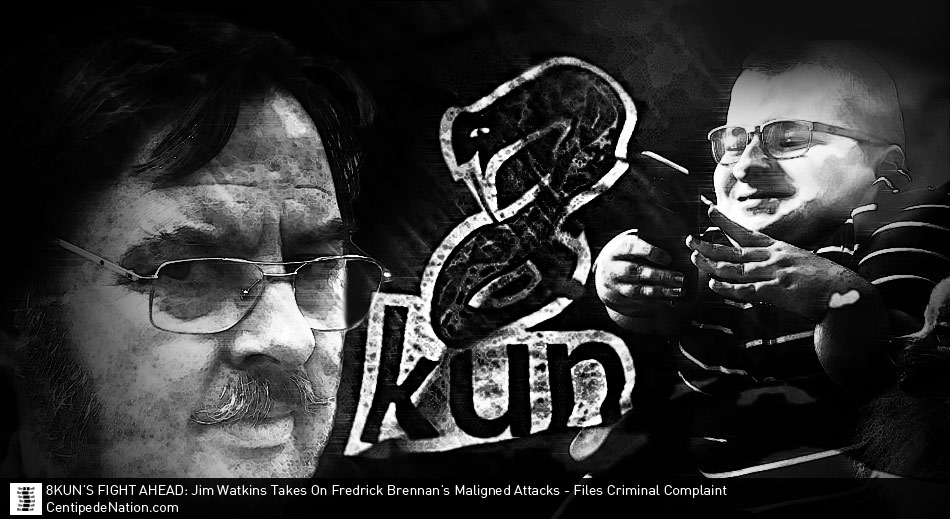 A few weeks ago, we made a post expressing how Jim Watkins could explore suing Fredrick Brennan for libel due to his personal attacks and consistent attempts at preventing Jim Watkins from conducting business. It seems Jim Watkins is moving forward and has released the details of his criminal complaint against Brennan. We are left to wonder if Fredrick Brennan is even going to survive this since his actions have been documented extensively.

Here’s the post where we pointed out Fredrick Brennan’s attack, the fact that he is a resident in the Philippines, and the libel laws that could be brought against him.

Keep in mind, Fredrick Brennan has been conducting his attacks from the Philippines. On the last slide above, we posted the Libel laws of the Philippines from Wikipedia. Emphasis is ours:

Title thirteen of the Revised Penal Code of the Philippines addresses Crimes Against Honor. Chapter one of that title addresses libel and slander. Libel is defined as “public and malicious imputation of a crime, or of a vice or defect, real or imaginary, or any act, omission, condition, status, or circumstance tending to cause the dishonor, discredit, or contempt of a natural or juridical person, or to blacken the memory of one who is dead”. Slander is defined as oral defamation. Slander by deed is defined as “any act not included and punished in this title, which shall cast dishonor, discredit or contempt upon another person”. Penalties of fine or imprisonment are specified for these crimes and for the threat of libel. A notable characteristic of these crimes under Philippine law is the specification that they apply to imputations both real and imaginary.

In 2012, the Philippines enacted Republic Act 10175, titled Cybercrime Prevention Act of 2012. Essentially, this Act provides that libel is criminally punishable and describes it as: “Libel – the unlawful or prohibited act as defined in Article 355 of the Revised Penal Code, as amended, committed through a computer system or any other similar means which may be devised in the future.” Professor Harry Roque of the University of the Philippines has written that under this law, electronic libel is punished with imprisonment from 6 years and one day to up to 12 years. As of 30 September 2012, five petitions claiming the law to be unconstitutional had been filed with the Philippine Supreme Court, one by Senator Teofisto Guingona III. The petitions all claim that the law infringes on freedom of expression, due process, equal protection and privacy of communication.

So what has Fredrick Brennan been accused of in Jim Watkins’s criminal complaint? Well, according to the filing, Fredrick Brennan is in violation of Section 4 (c) (4) of Republic Act No. 10175, also known as the Cybercrime Prevention Act of 2012 in relation to Section 6 of the same law and Article 355, as described in the Wikipedia article above.

The criminal complaint states that Fredrick Brennan used the Walmart shooter event to maliciously attack Jim Watkins’s reputation and character. Jim Watkins was not only disappointed, but “humiliated and anguished by the fact that [Brennan] maligned his good name to the community”. Here are some of the tweets from Fredrick Brennan that are given as evidence:

While these statements could be argued that he was just exercising free speech, the criminal complaint states that Fredrick Brennan was actually trying to cause damage to Jim Watkins’s reputation. Here’s a quote from the criminal complaint, which was also used in a case in the Philippines in 1914:

A man’s good name and reputation are worth more to him than all the wealth which he can accumulate during a lifetime of industrious labor. To have that destroyed may be eminently of more damage to him personally than the destruction of his physical wealth or health. He may prize his good name more than even his physical wealth or his health. The loss is immeasurable. No amount of money can compensate him for his loss. (Worcester vs. Ocampo, 22 Phil. Rep., 42.) The enjoyment of a private reputation is as much a constitutional right as the possession of life, liberty, or property. It is one of those rights necessary to human society and underlies the whole scheme of civilization and stable government. The respect and esteem of a man’s neighbors are among the highest rewards of a well spent life vouchsafed to man in this existence. The hope of the good esteem of one’s neighbors and associates is the inspiration of youth and its possession is a solace in later years. A man of affairs who has been seen and known by his fellow men in the active pursuits of life for many years and who has developed a great character and an unblemished reputation, has acquired a possession more useful and more valuable to most men than the possession of lands or houses or silver or gold. The law recognizes the value of such a reputation and imposes upon him who attacks it by slanderous words or libelous publication, the liability to make full compensation for the damage done.

On August 25, 2019, Fredrick Brennan did an interview with the Anti-Q podcast [QAnon Anonymous] where he stated Jim Watkins has dementia. (start time 48:37)

Here’s an excerpt in case you don’t want to give that podcast any clicks:

I noticed that he was repeating the same arguments over and over, so I just asked him “Hey Jim, do you have dementia?”… I asked him if he had dementia, and he just blanked, and stared at me… It’s my word vs his, but he said yes.

According to Riedel, Jim suffered from severe hearing loss without realizing it, not dementia; the hearing loss made people think he was demented. pic.twitter.com/nXFjKJ7nyF

So even though Fredrick Brennan got the truth from Tom Riedel, it doesn’t take away the fact that he previously said “I asked him if he had dementia, and he just blanked, and stared at me… It’s my word vs his, but he said yes.” in absolute terms.

It seems that Fredrick Brennan was actively trying to slander Jim Watkins’s reputation by spreading lies to the public.

Over the past couple of months, Fredrick Brennan has been pressuring hosting and networking companies to drop support for Jim Watkins’s site 8kun. Fredrick Brennan also urged his followers on numerous occasions to help with the attacks. To us, this is something that should not be overlooked. It seems Fredrick Brennan actively tried to discredit Jim Watkins and prevent him from conducting business.

In recent days, 8kun.net has briefly flickered online before disappearing again, thanks mostly to the work of 8chan founder Fredrick Brennan, who has been pressuring hosting and networking companies to drop support for the site.
[..] “One of the reasons I am trying to get this done, preemptively, is so that QAnon cannot come back,” Brennan told VICE News from his home in the Philippines. “It is critical that 8kun does not come back at all, in any form, for any length of time.”

Brennan has already admitted that he has a personal vendetta. Why is he so obsessed with shutting down 8kun? Does he just love the attention, is he getting compensation for all the interviews he has conducted? While his motive is unclear, Jim Watkins claims his acts have caused irreparable damage to his reputation.

Other Charges That Could Be Brought Against Fredrick Brennan

Anons have brought up that Fredrick Brennan’s actions could be considered ‘Tortious Interference‘. Tort is a wrongful act, other than a breach of contract that results in injury to another party’s person, property, dignity, or reputation, and which is recognized by statute or common law as a legitimate bases for liability. Intentional torts involve civil liability for harms that are deliberately caused by the defendants. It represents the intentional invasion of the plaintiff’s legally protected interest.

What intentional tortious acts could Fredrick Brennan have committed?

Fredrick Brennan on multiple occasions has demonstrated his intent to prevent Jim Watkins from conducting business by slandering him, stating “I have a vendetta with them”, and that he was the one responsible for them being “deplatformed repeatedly”. He went on to also state that he “won’t stop even if Jim Watkins personally sues”.

Here is Brennan’s response to the Anons that brought up Tortious Interference:

ATTN: vchmoe anons
1. I won't stop even if Jim Watkins personally sues me for tortious interference.
2. I'm not afraid of any lawsuit for any reason, especially not tortious interference. I'm innocent & would probably represent myself.
3. I haven't taken a break so far. pic.twitter.com/STDtm5L2hQ

Here’s are a small sampling of Brennan’s attempts to take down 8Kun:

Ron Watkins had so much time to prepare for today.

Want to keep it down? Ask @vdsina—my previous letter with a few changes should work fine as a template for your own. https://t.co/iqc1JyeEZm pic.twitter.com/j1CFBrDZWw

An open letter to @tucows regarding Jim Watkins and N. T. Technology ignoring their decisions and flouting their Terms of Service

I submit to you this open letter, "In re: Verification status of the @infinitechan account."

Clearly their main motive is grifting the Q people, so I can't imagine that they allow Q to post a quick PGP key and skedaddle.

After all, if that was the goal they had a lot of chance to do that, even with me getting them deplatformed repeatedly. It wasn't instant after all.

Last but not least, here’s Fredrick Brennan proving his vendetta against Jim Watkins:

What "argument" have I even made?

Have you read my tweets, or are you projecting some argument an imaginary progressive would make onto me?

I hate Jim Watkins
I feel wronged by him
I hate 8chan
I regret giving up 8chan
I feel slighted by the rebrand
This is personal for me. https://t.co/aso2OiKuwP

All tweets above have been archived.

Will Fredrick Brennan see the consequences of his actions? Will he be held accountable by the courts in the Philippines for both the criminal complaint filed by Jim Watkins and the possible tortious offences? Only time will tell.

An arrest warrant was issued for 8chan founder Fredrick Brennan for a ‘Cyberlibel’ Charge on behalf of 8kun and Jim Watkins. He was indicted by Filipino authorities, but he has just fled to the US and is now a fugitive.

Fredrick Brennan ran from an arrest warrant in the Philippines to the US. Authorities in the US have been alerted to his cyber crime involvement with an underage accomplice from Texas. https://t.co/AUwFrkr1ni

Things aren't always what they seem, now are they? https://t.co/8EJl1spQko pic.twitter.com/jtyBlHtEBH