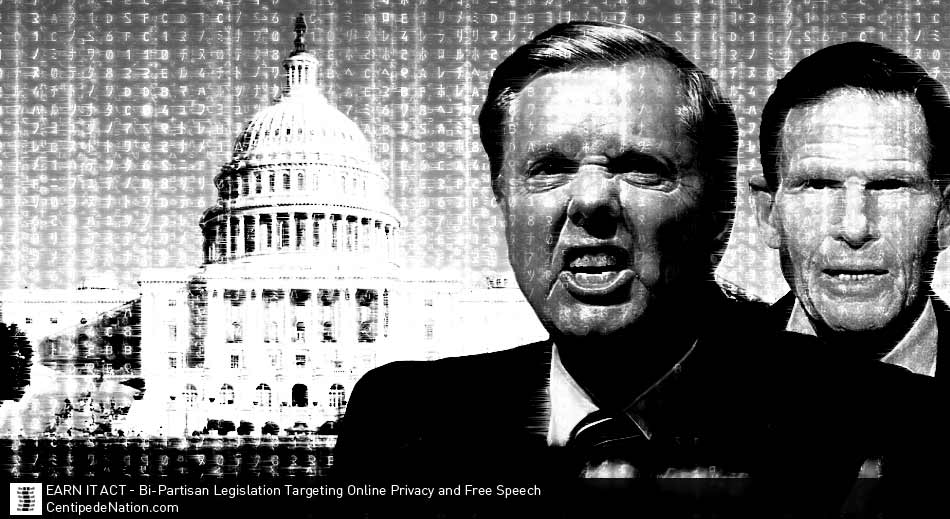 While Americans were too busy trying to deal with the Coronavirus pandemic, US legislators have been quietly trying to sneak in laws that threatens end-to-end encryption under the guise of saving sexually exploited children.

The EARN IT act is a bipartisan-backed bill introduced by Republican Lindsey Graham, Democrat Richard Blumenthal and others, with the aim of targeting online privacy and free speech under the falsehood of saving sexually exploited children. This narrative has been historically difficult for legislators to oppose, and now it’s being used once again as an argument for the weakening of encryption. Just think; any legislator that tries to vote against the EARN IT act will automatically be labeled as a supporter of online child exploitation. Just knowing that many lawmakers have no backbone, expect very little resistance.

Back in December of 2019, Lindsey Graham threatened Facebook and Apple with regulating encryption unless they gave law enforcement backdoor access:

“You’re going to find a way to do this or we’re going to go do it for you,” said Senator Lindsey Graham. “We’re not going to live in a world where a bunch of child abusers have a safe haven to practice their craft. Period. End of discussion.”

But neither Lindsey, nor anyone else provided any proof that the proposed legislation offered any solution to child exploitation. In fact, the Electronic Frontier Foundation (EFF) said the following:

The bill deals with the very serious issue of child exploitation online, but it offers no meaningful solutions. It doesn’t help organizations that support victims. It doesn’t equip law enforcement agencies with resources to investigate claims of child exploitation or training in how to use online platforms to catch perpetrators. Rather, the bill’s authors have shrewdly used defending children as the pretense for an attack on our free speech and security online.

There’s also Attorney General Bill Barr that’s been wanting encryption weakened for awhile now. Back in July of 2019, Techdirt wrote a piece with the following:

According to Barr, the government has a right to the contents of encrypted devices. He attempts to draw this conclusion by referring repeatedly to the Fourth Amendment. This safeguards citizens against unreasonable searches. Unreasonable searches can be performed as long as the government has a warrant. That’s as far as Barr takes this line of thought. As he sees it, encryption shouldn’t be able to nullify a search warrant. He believes encryption does this.
[…] Nothing is preventing the government from seizing devices. The warrant can still accomplish that. What Barr is arguing is that the Fourth Amendment guarantees government access to evidence, which it doesn’t. It only gives it the right to search for it.

On top of all that, AG Barr would also run a “19-member commission” that would develop “best practices” for companies seeking immunity.

The EARN IT Act would set up a 19-member commission (Section 3(c)) to develop best practices that companies would have to adopt to get immunity. Three spots would be reserved for the attorney general, the secretary of homeland security and the chairman of the Federal Trade Commission (FTC). The other 16 members, to be chosen by the heads of each party in the House and Senate…
[…] Although the structure of the commission is better than it was in the previous version, it could still be improved substantially. For example, under the current proposal, the attorney general would serve as the commission chair and thus would have substantial process and agenda-setting powers;

Backers of this bill are directly targeting Section 230 of the Communications Decency Act of 1996. Section 230 effectively grants tech companies protection from any liabilities associated with content on their platforms.

What is Section 230 of the Communications Decency Act of 1996?

Section 230 is an important feature of the Communications Decency Act that has allowed for free speech on tech platforms, but the bill has come under constant attacks since it was passed in 1996.

An important provision within Section 230 states that “No provider or user of an interactive computer service shall be treated as the publisher or speaker of any information provided by another information content provider.”

That provision basically means tech companies like Twitter or Instagram aren’t responsible for content posted on their platforms, rather, the liability would fall on the user instead. Without that provision, tech companies would get sued left and right for something any random user (or even bot) decided to post.

Sponsors of the EARN IT act:

Those Who Oppose the EARN IT act:

Whatever you feel about Snowden, he did have this to say recently about this legislation:

Remember, the EARN IT act is only the latest attack in the government's very long war on encryption. Switzerland's most sensitive communications-security company was secretly run by the CIA. There is nothing these people won't do to stamp out the idea of a private conversation. https://t.co/v4MOAhqQjP

Using terrorism as a narrative to push for legislation isn’t effective in this case, so the government has decided to use their old tricks by threatening us through our children. But it’s really not about the kids, it’s about unabated mass surveillance.