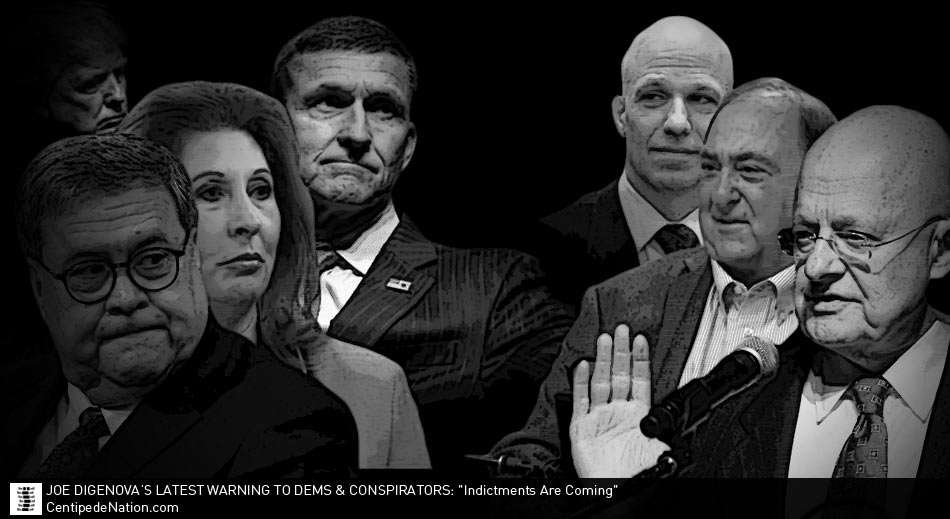 Ever since General Michael Flynn’s lawyer Sidney Powell filed a motion showing members of the intelligence community conspiring to take out Flynn, the Democrats have been pushing hard on trying to discredit AG Barr and Durham’s investigation. Joe diGenova tells us why.

In an interview with Mornings on the Mall – WMAL, Joe explained why James Clapper should be really worried, how Sidney Powell got the information she did, and why the Democrats are trying to discredit the DOJ while going full force on the impeachment narrative.

Joe diGenova goes on to explain the following:

[T]here will be indictments. John Durham has been investigating for a long time without a grand jury. What happened was they got so much information that their hands were tied, they had no choice. People are going to be indicted.

Now what do you find out when you do the types of interviews that John Durham has been doing for the last few months? Do you remember the recently revealed in Sidney Powell’s filing? Jim Clapper gets on the telephone and says to David Ignatius of the [Washington] Post, “do the kill shot” meaning take out Flynn with the leaked transcript, criminally leaked transcript of the call between Kislyak and Flynn.

How does Sidney Powell know that James clapper said to Ignatius “take the kill shot”? This is the stuff of grand juries. She knows that, Sidney Powell knows that, because Clapper was in a car during the inauguration and he called Ignatius, and he knew that someone that he worked with, he Clapper, had leaked the Kislyak telephone call to Ignatius.
Who was that person that leaked the Kislyak call? According to Sidney Powells filing, and according to information we learned, it was a man named James Baker. Not the James Baker from the FBI, but the James Baker who is the head of the Office of National Assessment in DoD. And guess who else worked at the Office of National Assessment? Stefan Halper was employed by them. And so, Mr. Baker gives the Kislyak call – according to Sidney Powell – to David Ignatius. Clapper knows that and calls Ignatius and says “take the kill shot now”.
Who was with Clapper that heard him say that to David Ignatius? I can assure you Clapper is scratching his forehead even more now, trying to think of who was that insignificant person sitting in the limousine with him when he called David Ignatius. This is the stuff of grand juries. There are going to be indictments, people are going down, and that is why Adam Schiff did what he did yesterday. They are now trying to figure out a way to discredit Durham and Barr and the grand jury… regrettably for them, nothing that they can do now will stop it.

Interesting point Joe diGenova brings up: there are 2 James Bakers. One in the FBI and one in the DoD. The James Baker in the DoD worked with Stefan Halper and supposedly leaked Flynn info to the press. According to Sidney Powell’s filing, Col. James Baker was Stefan Halper’s “handler”. Baker also regularly lunched with Washington Post Reporter David Ignatius.

The following is the example Joe diGenova pointed to of Adam Schiff panicking and trying to push the narrative that Barr is ‘weaponizing’ DOJ ‘to go after the president’s enemies’:

Even Dianne Feinstein is terrified and is trying to discredit Barr:

Senate Judiciary Committee Democrats have called on Attorney General Barr to recuse himself from matters related to Ukraine because of concerns about his role in President Trump’s efforts to damage a political opponent and undermine the Russia investigation pic.twitter.com/iTHoxNWtCo

Here is the part that Joe diGenova is referencing from Sidney Powell’s filing on page 19:

Stefan Halper is a known long-time operative for the CIA/FBI. He was paid exorbitant sums by the FBI/CIA/DOD through the Department of Defense Department’s Ofﬁce of Net Assessment in 2016. His tasks seem to have included slandering Mr. Flynn with accusations of having an affair with a young professor (a British national of Russian descent) Flynn met at an ofﬁcial dinner at Cambridge University when he was head of DIA in 2014. Flynn has requested the records of Col. James Baker because he was Halper’s “handler” in the Ofﬁce of Net Assessment in the Pentagon, and ONA Director Baker regularly lunched with Washington Post Reporter David Ignatius. Baker is believed to be the person who illegally leaked the transcript of Mr. Flynn’s calls to Ignatius. The defense has requested the phone records of James Clapper to conﬁrm his contacts with Washington Post reporter Ignatius—especially on January 10, 2017, when Clapper told Ignatius in words to the effect of “take the kill shot on Flynn.” It cannot escape mention that the press has long had transcripts of the Kislyak calls that the government has denied to the defense.