Julian Assange & The Pardon – Historical Evidence Disproves Media’s Spin of Assange’s Pardon By Trump In Exchange For A “Cover Up”. 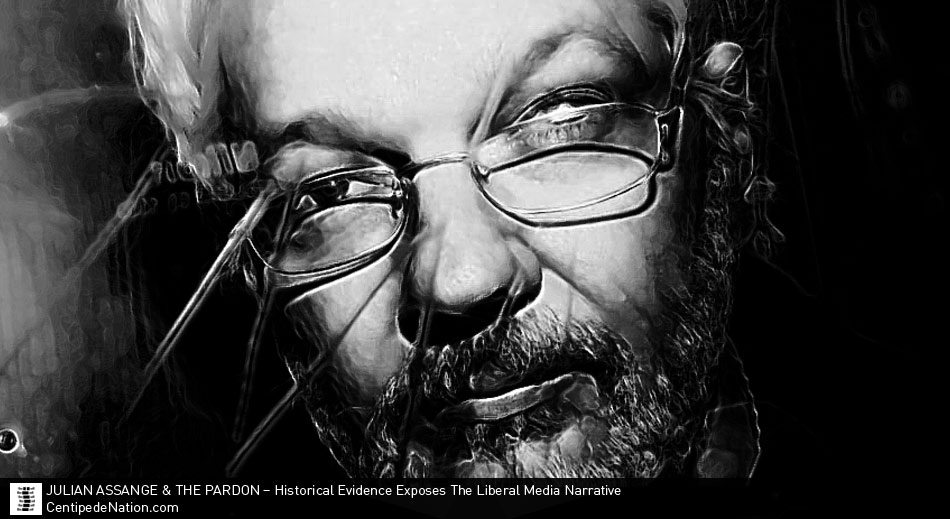 Big news is coming out of liberal media saying that Trump dangled a pardon if Assange would “Cover Up the Russa hack” of the DNC server. But there is plenty of evidence that disprove this claim if you just dig into past news. This post will provide some clarification and truth behind the liberal media’s war for your mind.

The Lawyers for Julian Assange claimed during a hearing at Westminster Magistrate’s Court on February 19th 2020, that they will submit evidence in the Assange’s extradition case that there was a “pardon offer” made by US president Donald Trump to Julian Assange.

The evidence is supposedly a witness statement made by Julian Assange’s personal lawyer Jennifer Robinson. Assange’s other lawyer, Edward Fitzgerald QC, told the court that the statement made by Jennifer Robinson “simply deals with Mr Rohrabacher going to Mr Assange, on the instructions of president was offering a pardon if Mr Assange would play ball and say the Russians had nothing to do with the DNC leaks.”

Now, there are multiple liberal outlets, including Assange’s Lawyer, claiming that Trump sent Rohrabacher to broker a deal with Assange. But that couldn’t be further from the truth. In a response to the claims, White House Press Secretary Stephanie Grisham said today:

“The president barely knows Dana Rohrabacher other than he’s an ex-congressman. He’s never spoken to him on this subject or almost any subject… It is a complete fabrication and a total lie,” she said of Mr Fitzgerald’s allegation. “This is probably another never ending hoax and total lie from the DNC.”

Did you read that? Trump never spoke to Rohrabacher on this subject. He never even had an opportunity because John Kelly blocked Rohrabacher from speaking to Trump back in October of 2017.

Rep. Dana Rohrabacher (R-Calif.) told Business Insider on Tuesday that Kelly and other top Trump aides are actively blocking him from meeting with the president to discuss information from WikiLeaks founder Julian Assange that Assange claims proves Russia didn’t interfere in the 2016 election.

Did you catch that? Rohrabacher wanted to meet with the President to discuss information FROM Assange.

Rohrabacher wasn’t working on behalf of President Trump, he was working independently with Assange and spoke with John Kelly to try to broker a deal. It was Assange that was offering documents that prove Russia was not the source of the DNC leaks. It wasn’t Trump trying to get this information from Assange. Assange was trying to leverage Trump with information that could make the Russia hoax irrelevant.

Here’s a video of Rohrabacher discussing his attempt at getting a deal for Assange from September of 2017:

Here is The Wall Street Journal article that is mentioned in the video:

A U.S. congressman contacted the White House this week trying to broker a deal that would end WikiLeaks founder Julian Assange’s U.S. legal troubles in exchange for what he described as evidence that Russia wasn’t the source of hacked emails published by the antisecrecy website during the 2016 presidential campaign… The proposal made by Rep. Dana Rohrabacher (R., Calif.), in a phone call Wednesday with White House Chief of Staff John Kelly…
[…] The possible “deal”—a term used by Mr. Rohrabacher during the Wednesday phone call—would involve a pardon of Mr. Assange or “something like that,” Mr. Rohrabacher said. In exchange, Mr. Assange would probably present a computer drive or other data-storage device that Mr. Rohrabacher said would exonerate Russia in the long-running controversy about who was the source of hacked and stolen material aimed at embarrassing the Democratic Party during the 2016 election.
[…] A Trump administration official confirmed Friday that Mr. Rohrabacher spoke to Mr. Kelly about the plan involving Mr. Assange. Mr. Kelly told the congressman that the proposal “was best directed to the intelligence community,” the official said. Mr. Kelly didn’t make the president aware of Mr. Rohrabacher’s message, and Mr. Trump doesn’t know the details of the proposed deal, the official said.

In the call with Mr. Kelly, Mr. Rohrabacher pushed for a meeting between Mr. Assange and a representative of Mr. Trump, preferably someone with direct communication with the president.

So Rohrabacher approached John Kelly with information offered by Assange and Kelly directed Rohrabacher to speak to the intelligence community. Kelly wanted Rohrabacher to do it the legal way (or as a diversion), instead of through backdoor channels. Notice in the video above, Rohrabacher claimed that the conversation between John Kelly and him was leaked. Think about why it was leaked – because of this sentence here (taken from the conversation): “Mr. Kelly told the congressman that the proposal “was best directed to the intelligence community.” John Kelly did this as a way to protect the President in the long game as he foresaw the media would try to spin this story.

Jump-start to today, Dana Rohrabacher released a statement in response to the media’s fake narrative:

​There is a lot of misinformation floating out there regarding my meeting with Julian Assange so let me provide some clarity on the matter:

At no time did I talk to President Trump about Julian Assange. Likewise, I was not directed by Trump or anyone else connected with him to meet with Julian Assange. I was on my own fact finding mission at personal expense to find out information I thought was important to our country. I was shocked to find out that no other member of Congress had taken the time in their official or unofficial capacity to interview Julian Assange. At no time did I offer Julian Assange anything from the President because I had not spoken with the President about this issue at all. However, when speaking with Julian Assange, I told him that if he could provide me information and evidence about who actually gave him the DNC emails, I would then call on President Trump to pardon him. At no time did I offer a deal made by the President, nor did I say I was representing the President. Upon my return, I spoke briefly with Gen. Kelly. I told him that Julian Assange would provide information about the purloined DNC emails in exchange for a pardon. No one followed up with me including Gen. Kelly and that was the last discussion I had on this subject with anyone representing Trump or in his Administration.

Even though I wasn’t successful in getting this message through to the President I still call on him to pardon Julian Assange, who is the true whistleblower of our time. Finally, we are all holding our breath waiting for an honest investigation into the murder of Seth Rich.

We know Assange’s Lawyers have been trying to get a Pardon from President Trump ever since his election in November 2016. In fact, back in January 2017, Assange reached out to the Trump administration for an immunity deal in exchange for information on the DNC hack, but turns out Comey intervened and killed the deal. Funny thing is, Bruce Ohr was also involved in that deal from the beginning. So the question remains if there is still potential of the Trump administration re-visiting the original immunity deal in exchange for technical evidence ruling out Russia as the source for the DNC hacked emails.

Why would Trump need Assange to say Russia had nothing to do with the DNC leaks, when he had already stated it multiple times?:

So who was the source of the DNC leak?

Did you hear what Assange said? When asked why he is so interested in Seth Rich’s murder Assange replied: “We’re very interested in anything that might be a threat to allege WikiLeaks sources… We’re not saying that Seth Rich’s death necessarily is connected to our publications. That’s something that has to be established. But if there is any question about a source WikiLeaks being threatened, then people can be assured that this organization will go after anyone who may have been involved in some kind of attempt to coerce or possibly in this case kill their potential source.”