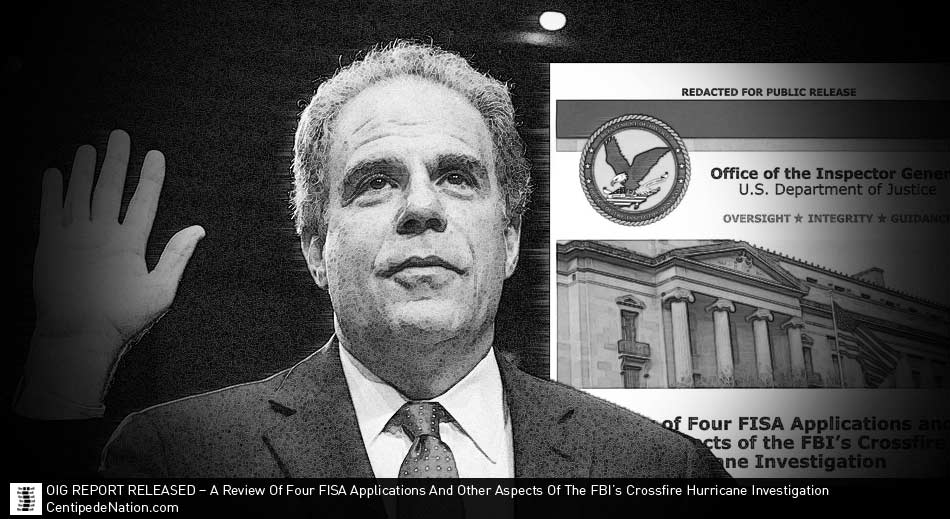 The Justice Department’s Inspector General Michael Horowitz has finally released his report into the FBI’s investigation of the Trump campaign during the 2016 US election. The report concludes that the underlying process of investigating the Trump campaign was ok, even though everybody that took part in the process hated the President. But it’s not over.

The report as a whole is rather damning without using any hard words nor accusations of criminality. This report does give enough evidence for a serious prosecutor like Durham to work with and dig deeper – as you’ll see by his response below.

John Durham releases statement:
“we do not agree with some of the report’s conclusions as to predication and how the FBI case was opened.”
AG William Barr releases statement:
“The Inspector General’s report now makes clear that the FBI launched an intrusive investigation of a U.S. presidential campaign on the thinnest of suspicions that, in my view, were insufficient to justify the steps taken.”

Looks like DOJ IG Report is clear that Republican FISA abuse memo from February 2018 was accurate and actually understated the FISA abuse the dirty cops engaged in. Time for FISA court to take action!

Page III – Horowitz reported there was no evidence of political bias:

In this review, we found that, while Lisa Page attended some of the discussions regarding the opening of the investigations, she did not play a role in the decision to open Crossfire Hurricane or the four individual cases. We further found that while Strzok was directly involved in the decisions to open Crossfire Hurricane and the four individual cases, he was not the sole, or even the highest-level, decision maker as to any of those matters. As noted above, then CD AD Priestap, Strzok’s supervisor, was the official who ultimately made the decision to open the investigation, and evidence reflected that this decision by Priestap was reached by consensus after multiple days of discussions and meetings that included Strzok and other leadership in CD, the FBI Deputy Director, the FBI General Counsel, and a FBI Deputy General Counsel. We concluded that Priestap’s exercise of discretion in opening the investigation was in compliance with Department and FBI policies, and we did not find documentary or testimonial evidence that political bias or improper motivation influenced his decision. We similarly found that, while the formal documentation opening each of the four individual investigations was approved by Strzok (as required by the DIOG), the Executive Summary Review of Four FISA Applications and Other Aspects of the FBI’s Crossfire Hurricane Investigation decisions to do so were reached by a consensus among the Crossfire “Hurricane agents and analysts who identified individuals associated with t he Trump campaign who had recently traveled to Russia or had other alleged ties to Russia. Priestap was involved in these decisions. We did not find documentary or testimonial evidence that political bias or improper motivation influenced the decisions to open the four individual investigations.

We concluded that Ohr committed consequential errors in judgment by ( 1) failing to advise his direct supervisors or the DAG that he was communicating with Steele and Simpson and then requesting meetings with the FBI’s Deputy Director and Crossfire Hurricane team on matters that were outside of his areas of responsibility, and (2) making _himself a witness in the investigation by meeting with Steele and providing Steele’s information to the FBI. As we describe in Chapter Eight, the late discovery of Ohr’s meetings with the FBI prompted NSD to notify the FISC in July 2018, over a year after the final FISA renewal order was issued, of information that Ohr had provided to the FBI but that the FBI had failed to inform NSD and 01 about (and therefore was not included in the FISA applications), including that Steele was “desperate that Donald Trump not get elected and was passionate about him not being the U.S. President.”

Page 196 – The foundation of the FISA application was uncorroborated and proven false after the fact:

Despite the FBI’s efforts to corroborate and evaluate the Steele election reporting, we were told by the Supervisory Intel Analyst that, as of September 2017, the FBI had corroborated limited information in the Steele election reporting, and much of that information was publicly available. 352 Most relevant to the Carter Page FISA applications, the specific substantive allegations contained in Reports 80, 94, 95, and 102, which were relied upon in all four FISA applications, remained uncorroborated and, in several instances, were inconsistent with information gathered by the Crossfire Hurricane team. For example, as detailed in Chapters Five and Seven, these allegations included, among other things, that Page had secret meetings with Igor Sechin and Igor D.ivyekin in July 2016 and served as an “intermediary” between Manafort and the Russian government. As we describe in Chapters Five and Eight, certain information the FBI had obtained did not support these allegations or the theory in Steele’s election reporting that Page was coordinating, or had coordinated, with Russian government officials on 2016 U.S. election activities. Additionally, the FBI determined that some of the allegations in the Steele reporting, including that Trump attorney Michael Cohen had traveled to Prague in late summer 2016 to meet with Kremlin representatives and that “antiClinton hackers” had been paid by the “[Trump] team” and Kremlin, were not true.

… we identified (1) numerous serious factual errors and omissions in the applications, (2) a failure across three investigative teams to advise NSD attorneys of significant information that undercut certain allegations in the FISA applications, (3) a lack of satisfactory explanations for these failures, and ( 4) a continuous failure to reassess the factual assertions supporting probable cause in the FISA applications as the investigation proceeded and information was obtained raising significant questions about the Steele reporting. We concluded that these facts demonstrated a failure on the part of the managers and supervisors in the Crossfire Hurricane chain of command, including FBI senior officials.

The failure to update OI with accurate and complete information resulted in FISA applications that made it appear that the evidence supporting probable cause was stronger than was actually the case.

As a result of the 17 significant inaccuracies and omissions we identified, relevant information was not shared with, and consequently not considered by, important Department decision makers and the court, and the FISA applications made it appear as though the evidence supporting probable cause was stronger than was actually the case. We also found basic, fundamental, and serious errors during the completion of the FBl’s factual accuracy reviews, known as the Woods Procedures, which are designed to ensure that FISA applications contain a full and accurate presentation of the facts.

We are deeply concerned that so many basic and fundamental errors were made by three separate, hand-picked investigative teams; on one of the most sensitive FBI investigations; after the matter had been briefed to the highest levels within the FBI; even though the information sought through use of FISA authority related so closely to an ongoing presidential campaign; and even though those involved with the investigation knew that their actions were likely to be subjected to close scrutiny. We believe this circumstance reflects a failure not just by those who prepared the FISA applications, but also by the managers and supervisors in the Crossfire Hurricane chain of command, including FBI senior officials who were briefed as the investigation progressed.

In the preparation of the FISA applications to surveil Carter Page, the Crossfire Hurricane team failed to comply with FBI policies, and in so doing fell short of what is rightfully expected from a premier law enforcement agency entrusted with such an intrusive surveillance tool. In light of the significant concerns identified with the Carter Page FISA applications and the other issues described in this report, the OIG today initiated an audit that will further examine the FBI’s compliance with the Woods Procedures in FISA applications that target U.S. persons in both counterintelligence and counterterrorism investigations.

We are deeply concerned that so many basic and fundamental errors were made by three separate, hand-picked investigative teams; on one of the most sensitive FBI investigations; after the matter had been briefed to the highest levels within the FBI; even though the information sought through use of FISA authority related so closely to an ongoing presidential campaign; and even though those involved with the investigation knew that their actions were likely to be subjected to close scrutiny.
He’s basically saying the FBI operated within its confines to investigate but found 17 egregious mistakes made. Also, he offered suggestions of how to do better and to make sure that this never happens again.

“I have ordered more than 40 corrective steps to address the Report’s recommendations. Because our credibility and brand are central to fulfilling our mission, we are also making improvements beyond those recommended by the OIG. And where cenain individuals have been referred by the OIG for review of their conduct, the FBI will not hesitate to take appropriate disciplinary action if warranted at the completion of the required procedures for disciplinary review.”