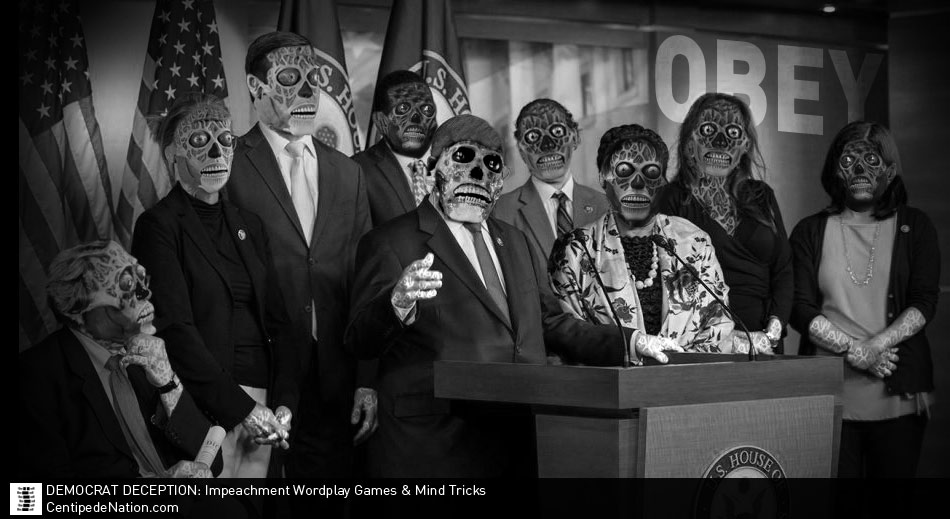 Today the House voted to authorize the procedures of an “impeachment inquiry”. This is not the same as an “impeachment investigation”. Their vote on the resolution to formalize the procedures of the impeachment inquiry removes certain rights from the House minority. But in order to accomplish this, Pelosi, Schiff, and the rest of the Democrats needed the media behind them in order to continue the deception using wordplay games and mind-tricks on the American people.

While the sheep think the Republicans are not being denied due process, in actuality, Democrats will have ultimate control of who testifies and what can be subpoenaed. Republicans will be allowed to subpoena witnesses and materials related to their inquiries, but Democrats have the right to decline. If that happens, Republicans can appeal to the committee – but since the Democrats control the House, fairness goes out the window.

The President and his council will not even be allowed to participate in Chairman Schiff’s hearings until the Democrats release their one-sided report for the Judiciary Committee. According to the Impeachment Inquiry Procedures in the Committee on the Judiciary, when the process moves through the House Judiciary Committee, chairman Jerry Nadler will allow Trump and his counsel to attend panel proceedings and ask questions, but the provision gives the Democrats the power to reject the White House’s request for additional evidence or witness testimony if they think the suggested evidence is not “necessary or desirable”.

Another thing to note is that this inquiry hasn’t followed past precedent and violates the President’s due process rights. In the past, Congress voted to open an impeachment inquiry and impeachment investigation during the Clinton and Nixon eras, but there has been no vote for Trump. Historically, every other impeachment inquiry has allowed both sides to call witnesses and allowed the white house to participate. But this Democrat-run soviet style attack has gone as far as to even prevent witnesses from answering certain GOP questions.

So in short, the Democrat-created Resolution provides the President and Republicans the following:

In the following example, notice how Schiff is careful to claim that this is an impeachment inquiry and not an investigation:

This week, we're voting to establish the format for open hearings that will be conducted as part of the impeachment inquiry.

The American people will hear firsthand about the President's misconduct.

Statements from the White House

Here’s a Statement from the White House following the release of impeachment inquiry resolution by the House Democrats:

The resolution put forward by Speaker Pelosi confirms that House Democrats’ impeachment has been an illegitimate sham from the start as it lacked any proper authorization by a House vote.

It continues this scam by allowing Chairman Schiff, who repeatedly lies to the American people, to hold a new round of hearings, still without any due process for the President.

The White House is barred from participating at all, until after Chairman Schiff conducts two rounds of one-sided hearings to generate a biased report for the Judiciary Committee. Even then, the White House’s rights remain undefined, unclear, and uncertain – because those rules still haven’t been written.

This resolution does nothing to change the fundamental fact that House Democrats refuse to provide basic due process rights to the Administration.

Here is the statement from the White House on the result of the vote:

-Cuts Oversight and Foreign Affairs out of public hearings
-Pretends to give @DevinNunes subpoena authority, subject to Schiff’s approval
-No Due Process for the WH
-Doesn’t undo the damage of Schiff’s biased and unfair sham

You can’t undo what they’ve already done. We’ve had these eight depositions now, they have been leaking selected parts of it, haven’t been following any type of basic due process, so you can’t undo what they’ve done. I think this is just one more kind of make it up as you go a long example, and it’s all been done in secret, with with these secret leaks. so it’s a continuation of the shame, their just trying to dress it up a little bit.

I think the reason she’s going to have this vote is because the American people understand it is a sham they understand it isn’t fair. The idea that the President doesn’t get counsel in the room, the people from the State Department don’t get agency counsel in the room, the minority gets no rights, we can’t even see the transcript, and unless we make a special appointment and some Democrats are in the room as you’re reviewing the transcript. And they get to selectively leak things because we follow the rules and they don’t.

This is all a ridiculous, unfair and partisan process, but in the end, the American people see through it. So I think the speaker is gonna try to dress it up a little bit, put a little lipstick on the pig as they say, and have this vote on Thursday. But, it’s not going to change anything and I think you’re going to see every single Republican vote against it.

The DEMs know that this entire impeachment process will drag out for as long as they need it to. Their plan has many facets.

These Democrats are not going to go down without a fight, and they will rabidly bite the ankles of everyone that gets in their way. It is now your duty as an informed citizen to VOTE, go door to door, have conversations with as many people as possible, pick up your keyboards and shine the light on the those that have aligned with the darkness.

Think about what the swamp is doing here; They are trying to “impeach” Trump for the “crime” of exposing the corruption that has been going on in DC for decades – on both sides. Now think about how they’ve been able to spin it to their constituents to make the swamp’s corruption acceptable and almost non-existent.