Eyes on Bidens in Romania with troubling dealings & associations 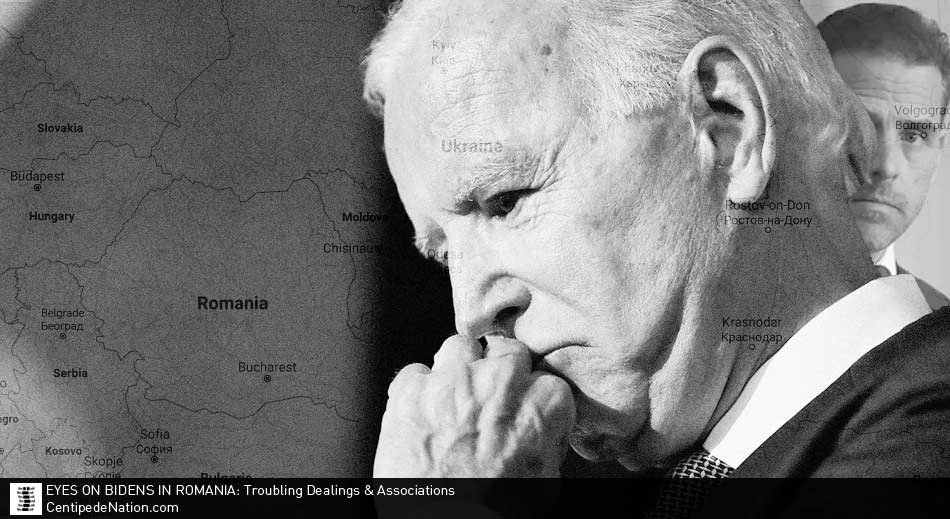 A couple of weeks ago Rudy Giuliani emphasized to Sean Hannity that we should keep our eyes on Romania. Well it seems like Rudy was right once again as the MSM has now released some troubling details about the Bidens Romanian dealings and associations.

“Sean, I want you to keep your eye not just on China, I want you to keep your eye on Romania. Just watch Romania…You won’t read about it in The New York Times, or the Washington Post, but just watch Romania…Ukraine is the tip of the iceberg. We go to China, I told you about Romania, I’ve got another country that I have on the list, and then we go back to all the stealing he did when he was in the senate. This was a long term Biden inc…”

Latest News about the Bidens in the Media

Here are a couple snippits from news that broke yesterday about the Bidens activity in Romania:

In 2016, Romanian real estate tycoon Gabriel “Puiu” Popoviciu, who was accused of orchestrating a corrupt land deal, hired Hunter Biden to “advise” him as he aimed to dodge federal prosecution. At the same time, Hunter’s father Joe Biden was claiming to be pushing Romania to clean up political corruption.

There’s no evidence that Hunter or his father acted improperly or violated any laws. But the arrangement, government ethics experts say, raises concerns that Hunter Biden was used as a prop in Popoviciu’s effort to dodge criminal prosecution.

“We don’t know what [Hunter Biden] was paid or what he was paid for but it does raise questions of whether this Romanian individual facing criminal charges was actually paying for a connection to the American vice president,” said Kathleen Clark, a Washington University law professor who specializes in government ethics.

Looking into the back story of Puiu Popoviciu reveals that he is one of the richest men in Romania who married into Romanian communist ‘royalty’. In the early 1980s, he became the son-in-law to Ion Dincă, who served as Deputy Prime Minister and Mayor of Bucharest under the Communist regime. During the 1989 Revolution, Ion Dincă was among the people who encouraged the Romanian President Ceauşescu not to give in to the protesters, was arrested and sentenced to death. His sentence was commuted to prison and he was freed after five years and three months. Puiu Popoviciu had fled the country (with his wife Doina Dincă) after the collapse of the old regime and settled in New Jersey in the early 1990s, only to return to Romania a few years later to start his business empire. He had his hand in in everything from computer parts to pizza to real estate.

Here’s a letter from Rudy that was sent to Romanian President Klaus Iohannis in August of 2018, where Giuliani criticized anti-corruption efforts in that country and expressed concerns about “continued damage to the rule of law in Romania, committed under the pretext of law enforcement”. The letter was obtained by mediafax.ro and translated with Google Translate:

I am writing to you to express my concern about the ongoing damage to the rule of law in Romania, committed under the pretext of effectively applying the law. This prejudice directly affects the course of foreign direct investments in Romania, because no rational investor would invest in a place where the rule of law and the legal system are subject to manipulation by those in power.
Prior to my election as mayor of New York, I served as a senior officer in the United States Department of Justice, holding the head of the reputed New York prosecutor’s office. For several years, as a prosecutor, I personally investigated and prosecuted, or led to the prosecution of a large number of cases of public corruption, which led to the conviction of many dignitaries.
After the fall of Nicolae Ceausescu in 1989, Romania has taken decisive steps towards the application of laws, in accordance with the right to a fair trial in the rules of the rule of law. However, the progress was seriously undermined by the excesses of the National Anti-Corruption Directorate (DNA) of Romania, under the leadership of the former chief prosecutor, Laura Codruţa Kovesi. These excesses included: intimidation of judges, defense lawyers and witnesses; unconstitutional listening of phones; forced testimony and incorrect court proceedings.
In addition, regarding the excesses made by DNA in the name of “law enforcement”, I became sadly aware during the last months about the existence of “secret protocols” that several public institutions have signed with the Romanian Intelligence Service (“SRI”). “). These include secret protocols with: the High Court of Cassation and Justice of Romania; The Prosecutor’s Office attached to the High Court of Cassation and Justice and the Superior Council of Magistracy.
The signers of the secret protocols include: Laura Codruţa Kovesi, from the Prosecutor’s Office attached to the High Court of Cassation and Justice and George-Cristian Maior, who now serves as the ambassador of Romania in the United States, on behalf of the SRI.
I recognize and understand the importance of the fight against corruption. In this respect, I encourage Romania to reaffirm its commitment to investigate and prosecute corruption honestly, transparently, and in accordance with the law. An amnesty should be given to those who have been charged and convicted as a result of DNA excesses made since the implementation of secret protocols, including several innocent people who have been sent to prison.
I also urge the Romanian Government to set up an independent commission made up of international judges and legal experts, to examine the origins of secret protocols, as well as their impact on the General Prosecutor’s Office and judges throughout the country.
Based on its findings, the independent commission could make specific recommendations for the enforcement of the law in Romania, and the Romanian Penal Code be reformed, to prevent the recurrence of such excesses.
The Romanian Government must also ensure that judges are not intimidated by DNA or SRI. As a result, there is a need to identify hundreds of DNA files about judges, as a DNA deputy recently described, to determine the names of the judges, the allegations and the origin of these accusations against the judges, as well as the chronology and duration of these files.
Finally, sections of professional responsibility should be established for the General Prosecutor’s Office, DNA, SRI and any other institutions recommended by the independent commission, in order to establish appropriate standards of behavior and responsibility, as well as to investigate complaints against these institutions.
Romania needs to clarify that it remains committed to ensuring fair, transparent, and law enforcement processes. This will require the correction of many abuses of DNA and SRI and should include amnesty for suspicious charges and convictions. Such a commitment to law enforcement will also improve investors’ appetite to contribute to Romania’s future.

According to the Washington Post, Rudy claimed that he sent the letter as a private citizen and not on behalf of President Trump:

“I’m a private citizen,” said Giuliani when asked why he took a position contradicting the U.S. government. He said he was not fully aware of the U.S. stance on the Romanian anti-corruption drive, casting it as a “domestic matter” in that country. “Maybe I should have put in the letter that I’m not representing the president,” Giuliani said, but he added that he assumed Romanian officials knew as much. He said he had spoken to at least one Romanian official as part of his outreach but declined to say whom.