FBI Document Dump From The Vault – The Finders 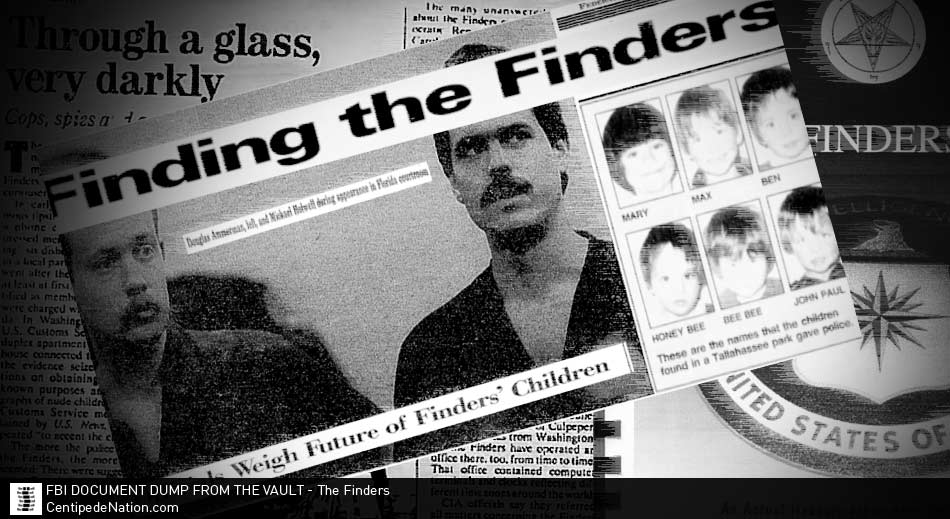 The “Finders” are alleged to be a CIA Operation, often described as a 1960s-style commune or cult that conducted “brainwashing” and used children “in rituals.” The FBI has now unsealed a 324 page document that details this operation and the US Intel Communities role and their alleged cover up of child abuse.

The FBI made the announcement of the declassified documents on twitter. We have scanned through much of the document and have included some interesting snippets below.

Highlights From The Finders Document Dump From The FBI Vault

[Redacted] After the imposition of prison sentences on both [redacted] became convinced that numerous other children had been abused and that the abuse was part of a large, well organized scheme. Subsequently, [redacted] has attempted to interest congressional members and the USCS in his efforts to enhance efforts in the area of child sexual abuse and investigating claims of organized sexual abuse.
During October 1993, [redacted] met with United States congressman Rose (Florida) to discuss allegations concerning a group know as “Finders” both congressman Rose and [redacted] subsequently provided information concerning these allegations to DOJ.

DOJ review of USCS documents indicates that during the execution of the search warrants by the MPD at the two “finders” properties, USCS SA [redacted] claims to have observed a substantial amount of computer equipment and documents purportedly containing instructions for obtaining children for unspecified purposes. The instructions allegedly included the impregnation of female members of the community, purchasing children, trading children and kidnapping them…

[Redacted] he stated, has maintained that there is a nationwide conspiracy among individuals involved in Satanic worship and sexual child abuse, with members being located in Stuart, Florida area. To date, Sergeant redacted advised he had located no hard evidence of any organized sexual abuse in the area, but noted there is similarity in sexual abuse cases that have occurred in different parts of the country.

Contact of the U.S Customs by Tallahassee PD regarding discovery of unidentified children and adult male “guardians” in city park.

Requested contact with Washington MPD for assistance in locating possible address and relatives of children.

Search warrants executed with MPD and two U.S. Customs agents (one at each site). FBI not involved until walk through on following day.

Based on observed documents, Customs agent unsuccessfully attempts to gain access to evidence for detailed analysis for use in investigating possible export, neutrality act, mann act, and child pornography violations.

[Redacted] contacts MPD Intelligence and advises that all reports regarding Finders are to be classified at the Secret level. [Redacted] also advised that no information was to be turned over to the FBI WFO for investigation, and that the WFO would not be advised of the [redacted] involvement/contact.

Children discovered in Tallahassee were eventually turned over to individuals claiming to be parents or guardians. No further MPD, FBI or Customs involvement.

As far as is known, no details of [redacted] involvement ever became public.

The pictures of the children with slaughtered goats was not a ritual sacrifice but rather an attempt at a “hands on” experience. One mother who wasn’t sure that the ordeal was necessary or that she approved (she indicated that only the three men were present at the time) thought that the experience was well intentioned as a experience for the children to learn. She likened the slaughter to that of what is done in conventional biology classes. Several mothers indicated that the “robes” being worn by the men were actually sheets the men wore during the slaughter to protect their clothing. The slaughter of the two goats on the Virginia farm was at the end of the summer and the goats couldn’t be left there alive. The meat from the Goats was taken back to Wash. D.C. to the group where they ate the meat. The children had the experience to see where meat comes from… an experience that most children don’t get while they are growing up.

[Redacted] has alleged that The Finders are involved in a well organized child abuse scheme, and that [redacted] in conjunction with the state department, and the FBI’s foreign counterintelligence section, conspired to cover up those abuses.

The F.B.I. has contact with the Finders since 1971 including a recent report dealing with the C.I.A. involvement with at least one of the members of the Finders passing information overseas concerning activities of the Central Intelligence Agency. When it became apparent that no Federal Laws were violated the F.B.I. vacated the investigation.

Note: Joseph DiGenova was the United States Attorney for the District of Columbia in 1987. He refused to prosecute on the charges of Kidnapping, probably because the children were claimed by parents or guardians.

On 6/14/93, The United States Attorney’s office for the District of Columbia declined prosecution of this matter and this case was closed. WMFO contact with U.S. Custom Service, WDC, indicated that customs SA [redacted] will not be available for interview until Monday, 11/8/93. WMFO is scheduled to review the MPD file concerning “Finders” on 11/4/93. Investigation continues at WMFO.

Note: Eric Holder was the United States Attorney for the District of Columbia from 1993–1997. He was the one who declined to prosecute and the case was closed. In case you are wondering, the WMFO is the FBI’s Washington Metropolitan Field Office.

These tunnels were found at the McMartin School in California – another case in the 1980s that dealt with ritual child sexual abuse.

45 foot tunnel. 9 foot wide subterranean entrance found under west wall of the “Dog” room (Classroom 4 [redacted] classroom)… Tunnel proceeded south, then east 45 feet through Classrooms 4 and 3, and north, then east 10 feet within Classroom 4… Four large, upright containers were found in the tunnel under the arch, obviously hand placed. A 9 foot wide chamber was found along the tunnel under Classroom 4. Top of chamber and top of sections of the tunnel had layers of plywood covers with ta_ paper which has apparently been supported by cinder blocks and 2″ x 2″ and 2″ x 4″ wooden posts found underneath. Tunnel features made it evident that tunnel was hand dug.

7 Foot tunnel extending into the triplex next door. Tunnel extended from the bathrooms off the office and Classroom 1 to the front yard of the triplex next door… Children described entrance and exiting tunnel in triplex yard exactly where tunnel and exit were found. 1 39″ x 41″ area under a hole cut in this neighbor’s bathroom floor had been excavated and subsequently filled.

Other significant facts. A small, white plastic plate with three pentagrams hand drawn on top of light green paint was found by the archaeologists in the stratified dirt in the play yard. Per historical archaeologists, pentagrams were hand drawn by an adult and not part of the manufacturer’s design…
[…] No doorknobs were on Classroom 3 door, only a dead bolt lock.
Each classroom had on off light switch labeled “Fire Alarm.” System did not connect to fire station but was used as an alert within the school.
More than 2000 artifacts were found under the school floor, including over 100 animal bones.

Though the FBI will never really admit officially that the CIA was involved, we can take a look into Former FBI Ted Gunderson’s take on it.

Remember Ted Gunderson speech about Pedo-Satanism and “The Finders”? Let us refresh your memory:

The CIA has many covert operations and some of them were tied to the Finders. As the FBI files stated above, during the searches at the “finders” properties they found instructions for obtaining children for unspecified purposes, how to purchase children, trade children, and kidnap them. The FBI files also reveal that the properties searched were full of computer equipment, large map that covered a wall lit by floodlights, a room with video recording equipment and much more. Was the CIA using the Finders to traffic children internationally?

CIA Denies Having Ties To The Finders

The Justice Department said Friday it is investigating allegations the CIA used a ″front company″ run by a commune to train agency employees and that the CIA blocked investigation of the group. The CIA denied any ties to the commune, called the Finders.
[…] The Washington Times reported Friday that the CIA had ties to the Finders, a Washington-based group once accused of engaging in Satanic rituals, child abuse and pornography. The charges were raised in the 1980s by law enforcement officials, but none resulted in prosecution.

According to an article by US News and World Report shown below, the leader of the ‘Finders’, Marion David Pettie said his late wife once worked for the agency and that his son worked for a CIA proprietary firm, Air America. If you don’t know, Air America was a passenger and cargo airline that was covertly owned by the CIA. There were allegations that it was used for drug and firearm trafficking. Now that you know the son of the cult leader is tied to this airline, would it be a stretch to think they could have also trafficked children?

Air America Re-brands Itself As Evergreen

Something to keep in mind is that when Air America was dissolved in 1976, Air Asia a wholly owned subsidiary of Air America and the company that held all of the Air America assets, was later purchased by Evergreen International Airlines. Remember Evergreen? It is not only Code-name for Hillary but Evergreen International Airlines was another airline closely affiliated with the CIA, with hubs at JFK and Hong Kong, maintenance and storage facility Arizona, and headquartered in Oregon.

Did Members Of The Finders Train CIA Agents?

According to the article from US News and World Report shown above, there are also other connections to the CIA, like the fact that several members of the Finders were employed by a firm that provided computer training to CIA officers.