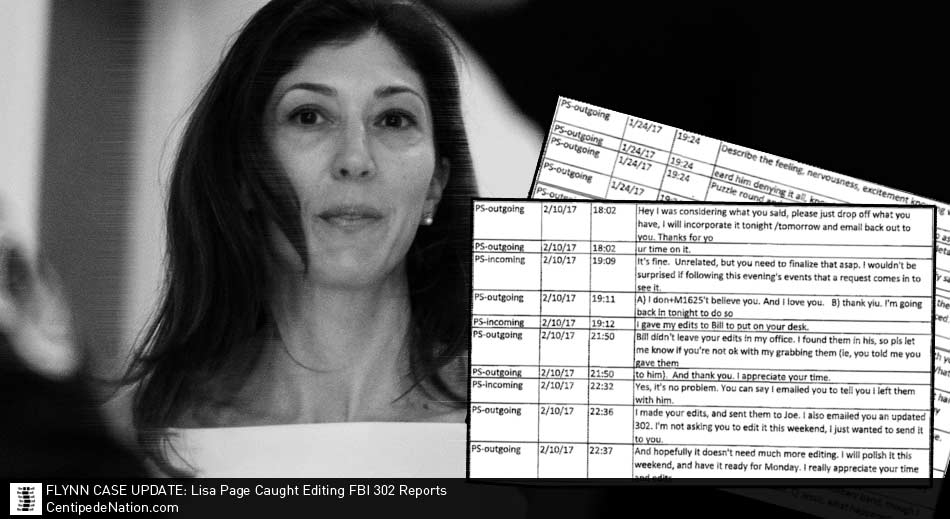 A new filing from General Michael Flynn’s lawyer Sidney Powell show discussions between the two lovers, Lisa Page and Peter Strzok, regarding editing the Flynn 302s and how Page lied about these edits to the FBI. Other damaging info includes Comey, Clapper and the rest of the coup plotters involved in Flynn’s take-down.

First off, a 302 form is a report or summary of an interview that is used by FBI agents and contains information from the notes taken during interviews. These are the forms the conspirators edited and used to paint Flynn in a bad light by having him appear guilty with things he never said. This new filing also shows how the Special Counsel controlled the press to keep these texts under wraps until they could obtain a plea from Flynn.

The following snippets are from the motion filed by Sidney Powell late last night:

“Lisa Page, Special Counsel to Deputy Director McCabe, resigned; she edited Mr. Flynn’s 302 and was part of a small, high-level group that strategically planned his ambush.”

Strzok to Page: “I made your edits” Also discussion of misleading leadership re: picking up 302.

The filing goes on to show James Clapper’s involvement too:

The defense has requested the phone records of James Clapper to confirm his contacts with Washington Post reporter Ignatius – especially on January 10, 2017, when Clapper told Ignatius in words to the effect of “take the kill shot on Flynn”. It cannot escape mention that the press has long had transcripts of the Kislyak calls that the government has denied to the defense.

The filing suggests how they manipulated the mockingbird media:

Not only did Mr. Van Grack not disclose a single text message before Mr. Flynn agreed to plead guilty, but Special counsel apparently managed to control the press on the issue until the plea was entered on December 1, 2017… It defies credulity to suggest that it was only unlucky for Mr. Flynn that the story broke the very next day…

April 20, 2017, Strzok texts Page: “I had literally just gone to find this phone to tell you I want to talk to you about media leak strategy with DOJ before you go.” Ex. 2.

Even Comey is included in the conspiracy:

This is no paranoid “conspiracy” delusion, as the government implies. It is well documented by the evidence already made public, which was long known to the government — yet withheld from the defense—until after Mr. Flynn pleaded guilty and in clear violation of Brady v. Maryland and its progeny. This includes a still undisclosed discussion by the lead agent to use news of the “Steele dossier” as “a pretext to interview some people;” the FBI Director’s calculated decision (contrary to FBI/DOJ protocol) not to notify the White House Counsel that the FBI wanted to speak with a key member of the President’s staff; a strategically-planned personal call from FBI Deputy Director Andrew McCabe, designed to prevent Mr. Flynn from seeking the advice of counsel or notifying the Department of Justice; planning and rehearsing tactics calculated to keep Mr. Flynn “relaxed” and “unguarded” so as not to alert him to the significance of the conversation; anxious text messages between Agent Strzok and his paramour, Lisa Page— McCabe’s Special Counsel—disclosing the deep personal involvement of these officials and others in an enterprise without a legitimate law enforcement objective.

There are still missing texts which are damaging:

The government still hides countless damaging texts—exculpatory and material to Mr. Flynn—that our independent work only recently uncovered. These were reported by CNN but have not been produced. These demonstrate violations of Brady and this Court’s order that go to the core of Mr. Flynn’s claim of outrageous government misconduct and to his innocence.

They even strategized on how to interview Flynn to keep him in the dark:

January 23, the day before the interview, the upper echelon of the FBI met to orchestrate it all. Deputy Director McCabe, General Counsel James Baker, [redacted], Lisa Page, Strzok, David Bowdich, Trish Anderson, and Jen Boone strategized to talk with Mr. Flynn in such a way as to keep from alerting him from understanding that he was being interviewed in a criminal investigation of which he was the target.

They knew Flynn was innocent:

Not long after, the FBI and DOJ wrote an internal memo dated January 30, 2017, exonerating Mr. Flynn of acting as an “agent of Russia;” and, they all knew there was no Logan Act violation. The government owes Mr. Flynn the full versions of these exculpatory statements.

FISA brings down the house:

The Mueller Report established that there was no conspiracy between anyone in the Trump campaign and Russia. It is also apparent now, or will be upon the release of the FISA report of the Inspector General, that the FBI and DOJ had no legal basis to obtain a FISA warrant against Carter Page or to investigate Mr. Flynn.

@Techno_Fog also has a great thread on twitter (which Sidney retweeted):

Read the full thread by Techno_Fog on twitter.
Archived link