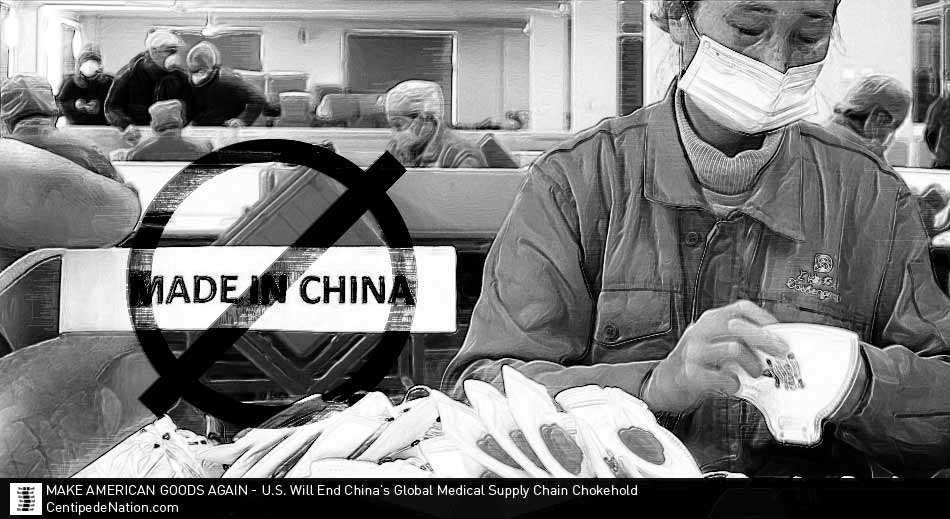 As the U.S. battles the spread of Coronavirus, many were made aware of our dependence on China for it’s medical supplies. That didn’t go over well with White House Director of Trade and Manufacturing Policy Peter Navarro. His stance is that China’s dominance on all aspects of the global supply chain is an economic and national security threat that needs to be solved quickly. He’s right.

Earlier this week, in an article by Xinhua, one of China’s media mouthpieces, Beijing threatened to impose controls of pharmaceutical exports to America amid the Coronavirus outbreak.

The following is a google translation from the Xinhua article, but still significant:

Also according to the US CDC officials, most of the drugs in the United States are imported, and some drugs are imported from Europe. However, Europe also places the production base of these drugs in China, so more than 90% of the US imported drugs are Related to China. The implication is that at this time, as long as China announces that its drugs are as domestic as possible and banned exports, the United States will fall into the hell of the new [Coronavirus] epidemic.

Unfortunately, it is very unlikely that Beijing is bluffing about their intentions. Which is also why Republican Florida Sen. Marco Rubio asked Trump to support the Senate’s “efforts to invest in diversifying our supply chain, especially in pharmaceuticals and medical equipment.”.

At yesterday’s lunch I asked @POTUS to support our efforts to invest in diversifying our supply chain, especially in pharmaceuticals & medical equipment.

He agreed & his team led by by Peter Navarro are also working on an EO to help address this. https://t.co/WlX7u158rV

In a recent interview with the New York Times, Peter Navarro said that he’s advised the President on tightening “Buy American” laws so that federal agencies can purchase American-made pharmaceuticals and medical supplies domestically, rather than import them from China. There’s been an executive order in the works and could be released in the coming days. The side-effect of this would have the potential of incentivizing companies to build more products in the United States, rather than China. To help with this transition, the Trump administration will streamline regulatory approvals from US manufacturers.

Many people have no clue, but Chinese pharmaceutical companies have captured 97% of the U.S. market for antibiotics and more than 90% of the market for vitamin C. Also, “In 2018, 95 percent of ibuprofen, 91 percent of hydrocortisone, 70 percent of acetaminophen, and 40–45 percent of heparin imported to the United States came from China, according to the U.S. Commerce Department.” according to Yanzhong Huang, a senior fellow for global health at the Council on Foreign Relations.

Even over-the-counter and generic drugs sold in the U.S. are made in China. This list includes antidepressants, HIV/AIDS medications, birth control pills, chemotherapy treatments, and much more.

“China has managed to dominate all aspects of the supply chain using the same unfair trade practices that it has used to dominate other sectors — cheap sweatshop labor, lax environmental regulations and massive government subsidies,” Mr. Navarro said in the interview. “As President Trump has said, what we need to do is bring those jobs home so that we can protect the public health and the economic and national security of the country.”

While the media is looking for anything to blame Trump on, they were missing-in-action when the Obama administration failed to address this supply chain issue during the 2014-2016 Ebola and 2015–16 Zika virus outbreaks. Throughout the Obama-Biden administration, our dependence on China has put us in the vulnerable position we’re in today. In fact, remember when Biden told the American people that China are “not bad folks,” and “they’re not competition for us.”? Democrats have an obvious Chinese problem, but we’ll leave that for another report.

Last week, President Trump said in a meeting with the chiefs of major pharmaceutical and biotechnology companies that “the coronavirus shows the importance of bringing all of that manufacturing back to America, and we will have that started… It’s already started, frankly. It started about a year ago.” This is a complete opposite direction the Obama-Biden duo took us in.