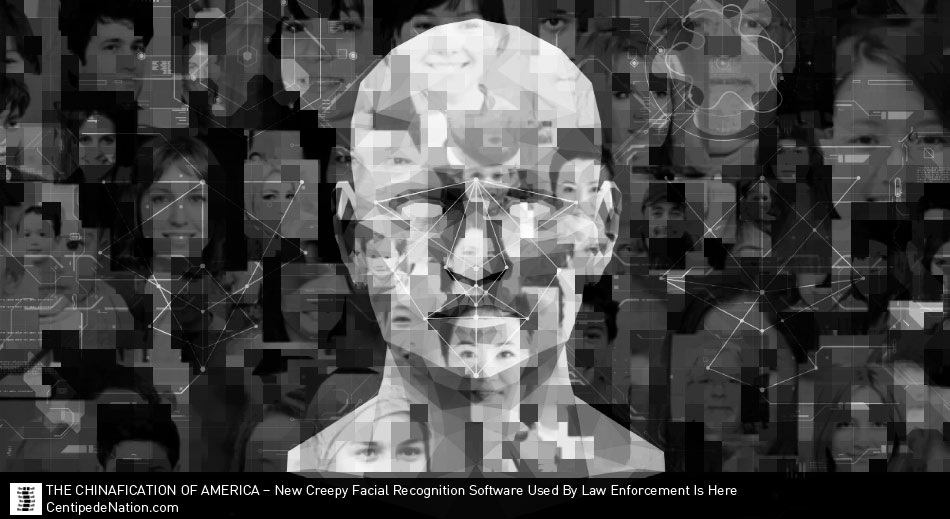 The Chinafication of America is upon us. As more citizens rely on the internet to stay connected, so too does the technocratic elite rely on your connectivity to thrive. And with your willingness to give up your privacy so easily, they are growing more powerful by the second.

First, it must be said, facial recognition has already been a part of society for many years. It’s nothing new. But what is new is how certain media outlets, like the NYTimes, have come out with pieces disclosing how far they’ve come. As of this writing, more than 600 law enforcement agencies have already started using a facial recognition software built by Clearview AI in the past year – a system that claims to have scraped data from all corners of the internet in an effort that has awarded them a database of over three billion images. The NYTimes claims Clearview AI goes far beyond anything ever constructed by the United States government or Silicon Valley giants.

Clearview AI basically scrapes the open web, collects billions of photos of people, and delivers the results through an app. This technology could dig up photos of you that you didn’t even know existed. For example, if a tourist took a snapshot of the environment and you happen to be in the background, the AI would easily identify and deliver the results to those that requested it. The AI also puts a name to that face in seconds. An interactive news journalist even did a forensics analysis of the Clearview’s app and discovered code that was able to pair the AI with augmented reality glasses.

The AI has gotten so good, that Kashmir Hill also says that Clearview AI was able to find pictures she never seen before even though she covered the lower half of her face.

Clearview says 600 law enforcement agencies are using its app. Detectives tell me it’s amazing. When the founder took a photo of me while I covered my nose & mouth, it still worked, returning 7 photos of me, one 10 years old. It’s insane.

Clearview is a pretty shady company too. The NYTimes had a reporter go to Clearview’s listed address but had no luck as the address didn’t even exist. Clearview later told the reporter the address listing “was a typo”. Well, after some digging, the reporter went straight to the venture capital firm in N.Y. that invested in Clearview and was later set up with a rep to discuss the app. She also got an interview with the company’s founder, Hoan Ton-That, an Australian/Vietnamese computer geek. And since we’re on the subject of the company’s founder, it should be noted that Clearview was also founded by Richard Schwartz. He was Giuliani’s aide when he was mayor of New York, he was also funded by Peter Thiel (Palantir).

When I first started looking into Clearview AI, it had a nonexistent office address on its website & one fake employee on LinkedIn, and no one from company would return my calls. But they knew about me and were monitoring for cops who uploaded my photo to their app. pic.twitter.com/LtYwD8m4r0

The law enforcement officers who were questioned about its use say the app helps solve crimes such as shoplifting, identity theft, credit card fraud, murder and child sexual exploitation cases.

But how accurate is this tech when it comes to race? Unsurprisingly, facial recognition systems still have their flaws, especially towards blacks. US government tests found top-performing facial recognition systems misidentify blacks at rates 5 to 10 times more than they do whites. In fact, China is even starting to recruit Africans in order to help train their technology.

China has gotten to the point where facial recognition technology is so embedded into their networks of surveillance cameras, that they’ve been caught using it to specifically target a minority of Muslims called Uighurs, while keeping records of their comings and goings. In fact, they go as far as snatching up the Uighurs after successfully identifying them through AI and putting them in re-education camps. Chinese authorities also maintain a vast surveillance net that includes people’s DNA.

From the NYTimes article – How China Is Using A.I. to Profile a Minority:

Ethnic profiling within China’s tech industry isn’t a secret, the people said. It has become so common that one of the people likened it to the short-range wireless technology Bluetooth. Employees at Megvii were warned about the sensitivity of discussing ethnic targeting publicly, another person said.

China has devoted major resources toward tracking Uighurs, citing ethnic violence in Xinjiang and Uighur terrorist attacks elsewhere. Beijing has thrown hundreds of thousands of Uighurs and others in Xinjiang into re-education camps.

This onslaught of surveillance is not exclusively a Chinese phenomenon – experts are forecasting one billion surveillance cameras worldwide by 2021. In fact the reports shows that the US, like China, already has about one surveillance camera for every four people. The global surveillance industry has experienced a surge in technological breakthroughs in image quality and artificial intelligence. Governments use these to their advantage for managing traffic and even predicting crimes (yes, think Minority Report). From the Wall Street Journal Dec. 6, 2019:

The report, from industry researcher IHS Markit, to be released Thursday, said the number of cameras used for surveillance would climb above 1 billion by the end of 2021. That would represent an almost 30% increase from the 770 million cameras today. China would continue to account for a little over half the total.

Fast-growing, populous nations such as India, Brazil and Indonesia would also help drive growth in the sector, the report said. The number of surveillance cameras in the U.S. would grow to 85 million by 2021, from 70 million last year, as American schools, malls and offices seek to tighten security on their premises…

There is a big difference in the implementation of surveillance cameras between China and the US; In China they are mostly used for video surveillance and facial recognition of people in cities, whereas in the US, surveillance cameras are primarily used for the purposes of retail and commercial purposes. But that could change at any moment, as is reflected in todays report of how US law enforcement is implementing facial recognition and how they’ve been partnering with Amazon’s RING – where they can quickly request and download video recorded by Ring’s motion-detecting, Internet-connected cameras inside and around Americans’ homes.

While questions of constitutionality arise from such use-case scenarios, a memo that Clearview provided to potential customers said law enforcement agencies “do not violate the federal Constitution or relevant existing state biometric and privacy laws when using Clearview for its intended purpose.” That memo appeared to be so effective, the Atlanta police and Pinellas County Sheriff’s Office in Florida started using Clearview AI soon after.

Defenders of facial recognition cite this technology as an effective tool for police to protect their communities. But, the real issue isn’t really a tech problem, it’s whether or not the government can be trusted with this technology because they lack proper oversight over how law enforcement agencies will actually use it.

This subject is so controversial, that one of Detroit’s Police Commissioners was actually arrested at a hearing last year trying to speak out against the system.

The implementation of this software in our law enforcement is not going unnoticed and unchecked. Digital rights advocacy group ‘Fight for the Future’, created an interactive map that displays where and when US law enforcement agencies use facial recognition software to scan through millions of Americans’ photos.

Now here’s the deal with ‘Fight for the Future’. They are generally considered a left-of-center non-profit organization, and we do not agree with the majority of their initiatives, but we can’t deny that their map does a good job at keeping track of how facial recognition is being implemented across the US, which is why we’re sharing it with you.

In the end, privacy and regulation of facial recognition tech should be a bi-partisan issue. In fact, last year when it was time to take a hard look at this type of tech, both parties in congress got together in an unusual show of bipartisanship. This was the type of subject that got both sides working together, and it should be the type of subject every citizen that values their privacy connects with too.

Last but not least, we’ll leave you with an excerpt from Julian Assange’s book: When Google Met WikiLeaks.

“There is an uncomfortable willingness among privacy campaigners to discriminate against mass surveillance conducted by the state to the exclusion of similar surveillance conducted for profit by large corporations. Partially, this is a vestigial ethic from the Californian libertarian origins of online pro-privacy campaigning. Partially, it is a symptom of the superior public relations enjoyed by Silicon Valley technology corporations, and the fact that those corporations also provide the bulk of private funding for the flagship digital privacy advocacy groups, leading to a conflict of interest.

At the individual level, many of even the most committed privacy campaigners have an unacknowledged addiction to easy-to-use, privacy-destroying amenities like Gmail, Facebook, and Apple products. As a result, privacy campaigners frequently overlook corporate surveillance abuses. When they do address the abuses of companies like Google, campaigners tend to appeal to the logic of the market, urging companies to make small concessions to user privacy in order to repair their approval ratings. There is the false assumption that market forces ensure that Silicon Valley is a natural government antagonist, and that it wants to be on the public’s side—that profit-driven multinational corporations partake more of the spirit of democracy than government agencies.

Many privacy advocates justify a predominant focus on abuses by the state on the basis that the state enjoys a monopoly on coercive force. For example, Edward Snowden was reported to have said that tech companies do not “put warheads on foreheads.” This view downplays the fact that powerful corporations are part of the nexus of power around the state, and that they enjoy the ability to deploy its coercive power, just as the state often exerts its influence through the agency of powerful corporations. The movement to abolish privacy is twin-horned. Privacy advocates who focus exclusively on one of those horns will find themselves gored on the other.”

What you thought was merely a drama on TV, was actually a social-engineering program conditioning you for the surveilance of the future – a future that is already here. What do you do now? It’s your move.